Why INFP Females Are So Unique 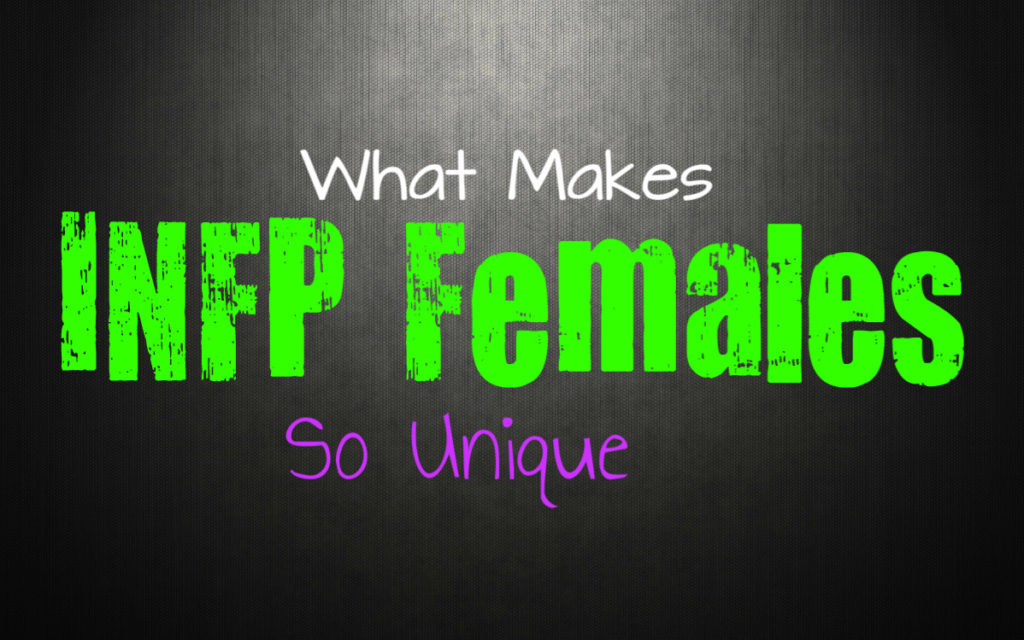 Why INFP Females Are So Unique

There is plenty of misinformation about INFPs, especially female INFPs. They are an extremely misunderstood personality, which makes it rather difficult to peg them. Of course, any person is unique and cannot be put into a box- INFPs especially fit into that description. Here are just a few things that you should know about the INFP female, and what makes them unique.

They Feel Everything So Deeply

INFP women often attempt to appear confident which can sometimes come across as defensive to people who do not understand them. They simply do not want to let their sensitive parts show too much. INFPs feel everything around them so deeply, and are often connected to the world in a powerful way. They care about others, and often want to do whatever they can to help people. They feel things in a way that many people cannot understand, and simply don’t do anything in a shallow way. Their sense of compassion and warmth can sometimes go unnoticed because of the way that they express themselves. INFPs do not always express their emotions in a way that other people can completely understand. Their inner world is so rich, that it does not always translate in a more conventional way. This does make it difficult for them sometimes, especially if they are attempting to explain themselves verbally. Sometimes the best way for an INFP to make their feelings or thoughts more clear, is for them to take the time to write them out.

INFPs need plenty of alone time to process things, which can also be misunderstood by others. They need to have time to recharge, and during this time they are often thinking about their loved ones. They might not outwardly express what they are thinking about, but being alone allows them time to process their feelings. It is a struggle that many introverts face, especially when people perceive this need for alone time as being “rude”.

They Can Be Pretty Awkward

There are some ideas about the female INFP that because she is in touch with her emotions, she must be the perfect idea of femininity. While some INFPs are certainly in touch with aspects of their feminine side, that doesn’t mean they aren’t extremely awkward at times. INFP females often see themselves as being terrible at flirting, and will even do things that appear extremely awkward. This part of themselves is often seen as rather endearing to the people around them, but some people might be thrown by it. INFPs are very intelligent and likable people, but there are parts of their personality that cause them respond in ways that are unexpected.

INFP females might enjoy a girly side of themselves from time to time, but they might also like being a tomboy as well. In many social situations an INFP might not know the typical reactions, and might even react in ways that people do not completely understand. Not only do INFPs dislike conforming to what other people expect, they simply aren’t capable of it. In order to be happy, they need to be allowed to be themselves. INFPs often do not mind awkwardness, and often will embrace that part of themselves.

Even though INFPs are in touch with their feelings, they aren’t always the most conventional individuals. They don’t fit into the idea that society has of “feminine”, and prefer to live by their own set of morals and rules. INFP women know what they believe is right, and try very hard to follow their intuition. They don’t want to do anything that will harm innocent people, and will always try to take the path that they believe to be the right one. They might make mistakes along the way, but they will continue to follow their inner voice. INFPs don’t always believe in following a path that others expect them to, which can sometimes be seen as odd to others. They simply know what they believe in, and won’t allow others to force them to compromise themselves or their integrity.

INFP women often refuse to follow the idea of what a woman “should be” and instead find a way to express themselves on their own. This sense of independence can often cause the INFP woman to be wildly misunderstood by others. INFPs simply need to find people who can appreciate their unique ways, and who admire them for their strong inner morals and their giving nature. INFP women often have their own unique signature ways of expressing their feminine side- but their need to keep to themselves might cause this to go unseen by others.

Their Sensitivity Is Often Misunderstood (Just Like Everything Else About Them)

INFPs have unbelievably rich inner minds, which often causes them to daydream more than other people. They might find themselves getting lost in their own world, which can be perceived as odd by those around them. They have a lot going on inside of them at once, which makes them very fascinating people to be around. For the people who are closest to them, INFPs can be wonderful companions. They are extremely supportive and loving, as well as amazing listeners.

The INFPs sensitive side is often misunderstood, causing people to find them weak. Their sensitivity is not a weakness at all, but in many ways it is their strength. They can easily connect with and understand others because they are capable of relating to many different ideas. They are compassionate people, who are capable of feeling things on a very deep level. People might see their sensitivity and vulnerability as something to take advantage of, but INFP are often good at sensing those people. They do sometimes get hurt, but they are much stronger than they seem. INFPs are okay with feeling the pain in life, and often realize that it is an important part of the world around them. Without pain INFPs realize they wouldn’t be able to truly experience joy. They are often more capable of seeing beauty in the sadness that is around them.

INFPs are some of the most misunderstood individuals, simply because they are different than the norm. This makes it hard for them to find people who can truly appreciate them. Once INFPs find someone who accepts them for who they are, they will hold onto them very tightly. They will give all of themselves to the people they love, since they do not take these connections lightly. INFP women do not believe in temporary relationships, and really only want to invest their energy into something that they believe will last. They might stay single for a long time, or find themselves with very little close friendships. This only happens because the INFP woman wants to find people that they believe will stick around for good. They dislike anything shallow, and only want meaningful relationships in their lives.

INFP women might be extremely misunderstood, but they are also highly appreciated by those closest to them. They have a whimsical way about them, which often comes along with an excellent sense of humor. They often love to laugh, and are great at going along with the ups and downs that come with life. The INFP female might appear to be sensitive and flighty, but she is also strong and formidable. It would certainly be a big mistake to underestimate an INFP woman.

4 Insights Into an INFPs True Fire

Here’s Why INFPs Make the Most Amazing Best Friends