Can You Handle Being a Dirty Secret, Based on Your Personality Type 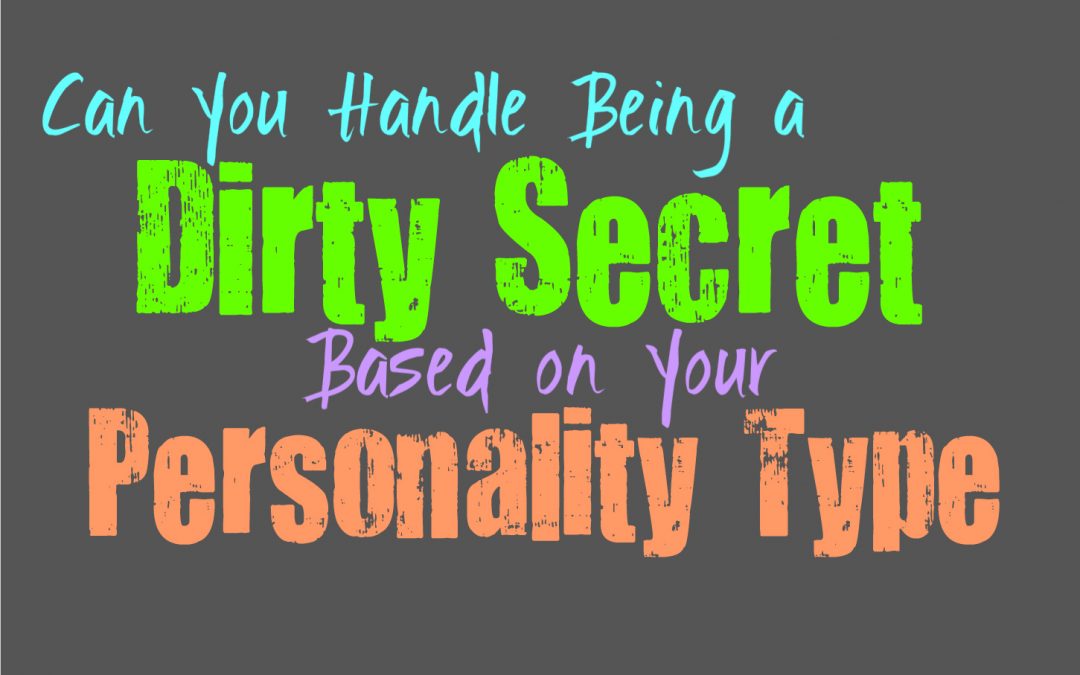 Can You Handle Being a Dirty Secret, Based on Your Personality Type

There are scenarios where people want to keep certain relationships and connections a secret. Sometimes it is for reasons which can be easily justified, while other times it is just hurtful. Here is how you can handle being someone’s secret, based on your personality type.

For INFJS the feeling of being someone’s dirty little secret, is often rather unappealing after a while. They can be somewhat self-abusive people, so the more immature INFJ will definitely be drawn to things like this at first. They might find it a bit intriguing to be in this situation, especially if they can dramatize it and make it feel like there is a good reasoning behind this. INFJs can sometimes be drawn to people who need to be fixed and in the situation where they become a secret, this is likely what they are interested in. They will want to solve this persons issues and find a way to make them proud of the INFJ. Ultimately, this type of choice is going to weigh on them, because what they truly want is for others to be happy to have them and not keep them a secret.

ENFJs might have a part of them which can be drawn to the feeling of being a bit of a secret. They can sometimes have a desire to save or help people, and so this leads them to more toxic people. ENFJs can sometimes justify these situations, seeing the reasoning behind it and wanting to find a way to make it all better. They can sometimes cope with being kept a secret for certain reasons, but they will often reach a breaking point where they need things to be brought into the open. They often reach a point where it become too much for them and they realize they need to move on from the more toxic situations in their lives.

INFPs don’t mind being private about certain things, especially if they are afraid of people trying to ruin a relationship. They don’t mind keeping things a secret in some situations, what they don’t like is being a dirty secret. When it feels like someone is ashamed of them or keeping them hidden because of negative reasons, they won’t likely handle this very well. INFPs want relationships and friendships based on sincere emotions and trust, and so for them it is important to be proud of one another. If someone seeks to keep them a secret in a way that makes them feel dirty, the INFP will definitely find themselves wanting to walk away.

ENFPs don’t usually process being a dirty secret of someone’s, and will likely take offense to this. There are times when it might bother them, but yet they try to find a way to overlook it. For the ENFP it is best to always follow their hearts and go after what they want in life. If a relationship means a lot to them they might attempt to rationalize the struggles and the feeling that they are being kept a secret. This is something that likely won’t last long for them though, since they do want to be able to feel like their loved ones are proud of them and happy to have them around.

INTJs don’t mind keeping things private for more practical reasons, but feeling like a dirty secret likely won’t sit well with them. They are searching for people they can be themselves with, and they dislike having to pretend for the sake of anyone. They often struggle with the idea of having to be kept a secret for someone else, and will likely drop this person rather easily. They are often searching for people they can build real and meaningful connections with, and they are willing to wait for this instead of simply accepting what is in front of them.

ENTJs really don’t like being someone’s secret, especially since they try to approach everything from a logical and rational point of view. Instead of allowing their emotions to stand in their way, they will want to analyze and figure out if this person is worth their time and energy. When someone is trying to keep them a secret there is almost always a negative reason behind it, and ENTJs aren’t really drawn to that behavior. They are more interested in finding someone they can make a real lasting relationship with, whether that be romantic or simply friendship.

INTPs might find themselves curious about different behavior, and in some cases they find themselves with a savior complex. In these situations the INTP can end up with people who decide to keep them as a dirty secret. They might cope with this by trying to understand it and really figure out if they can change this situation. INTPs can sometimes end up in negative situations because of their curiosity and also the fact that deep down they have big hearts. INTPs don’t intend to get themselves into these connections, but sometimes they wind up here regardless of how it makes them feel.

ENTPs don’t really like when someone is trying to keep them a secret, since it can feel like this person is trying to use or manipulate them. They don’t like this type of deceitful situation and prefer when someone is more upfront and not constantly trying to hide things. Sometimes the ENTPs curiosity can get the better of them, and so they might desire to take on the challenge in some ways. When this happens they find themselves stepping into situations they ordinarily wouldn’t, simply because they want to understand it more or understand the person better.

ISTJs definitely don’t like being someone’s dirty secret, and in most situations they won’t accept it. They prefer to be around people who are proud of them, and who are happy to be in their lives. Someone trying to keep them a secret because of shame or something dishonest, is not likely to be acceptable for the ISTJ. They don’t mind privacy and don’t often feel like they need to constantly express themselves, but that doesn’t mean they are okay with someone hiding their connection with the ISTJ. They are perfectly okay letting go of a relationship if it doesn’t seem right for them.

ESTJs might be okay with someone wanting to keep them secret at first, but eventually they will make it known that it cannot continue. They are competitive people, and sometimes they will take this as a challenge instead of an insult. If the ESTJ finds themselves drawn to someone, they do whatever it takes to have that person in their lives. If that individual wants to keep them a secret, they simply take this as a challenge and will eventually want to make their relationship known.

ISFJs really struggle with feeling like a dirty secret, and likely won’t really want to accept this. They might handle it for a short time, since they have a tendency to want to fix or save people who are struggling. If they deeply care for someone they might rationalize the situation and try to find a way to make it better. ISFJs simply don’t like giving up on others and so they definitely might find themselves being kept a secret for a short time. Eventually this will feel like too much though, especially if that person doesn’t come around to their needs.

ESFJs really don’t like being someone’s dirty secret, and likely won’t cope with it well at all. There are some times when they want to try and make things work, and so they might just continue to subtly express that it needs to change. When they do care for someone ESFJ have a hard time just walking away, and so they want to find way to make the relationship work even when they are having a real hard time with it. They care about others and will do their best to try and make them happy and make the connection work.

ISTPs don’t really mind the idea of being someone’s dirty secret, but at the same time it depends on the situation itself. They sometimes step into new situations without really focusing much on what others see and believe. ISTPs can sometimes enjoy the idea of keeping things secret, since they don’t like having to shout things from the rooftops. For them it is good to have some time where their relationship is kept quiet, but ultimately they don’t waste their time if it is going to continue past the point it should.

ESTPs can sometimes fall into situations which aren’t really good for them. Simply because they feel passionate about a person, they might allow them to keep the connection a secret. The fact that ESTPs jump into things sometimes, can get them into relationships which might be a bit toxic. In this case the ESTP will become someone’s dirty secret, even if they shouldn’t allow this to occur. They can sometimes rationalize it, simply because it feels good in that moment.

ISFPs might be okay with certain people keeping their connection a secret, since sometimes their emotions take control of their actions. ISFPs can sometimes dive into something since they are following their heart instead of their head. If they have strong feelings for someone they can sometimes find themselves wanting to make things work, when they should be walking away. ISFPs simply don’t like walking away from someone when they care deeply for them, and so they might let them keep things a secret for a while.

ESFPs don’t want to be someone others are ashamed of, but at the same time they sometimes find themselves drawn to things that are a bit bad for them. They follow their emotions and so if something feels good in the moment, they will be okay with it. This can sometimes leave the ESFP feeling a bit overwhelmed, since they want to try and make things right and will rationalize it when they probably should just walk away from that person.