ENTJ Myths, Stereotypes & Misconceptions: Cliches and Tropes That Are Inaccurate 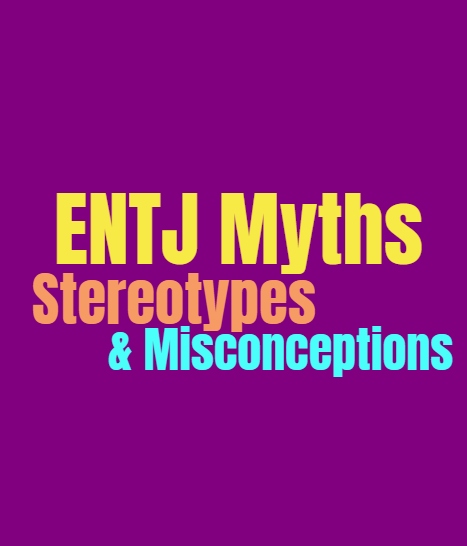 ENTJ Myths, Stereotypes & Misconceptions: Cliches and Tropes That Are Inaccurate

There are plenty of myths and stereotypes for the ENTJ which are both harmful and inaccurate. These ideas are often spread online and causes the ENTJ to appear in ways which are untrue to who they actually are. Stereotypes are rarely ever useful pieces of information, instead they end up causing these personalities to seem like something they aren’t. It leaves people judging them without actually getting to know who they are on a more personal level. ENTJs have far more complexities which are not obvious on the surface. These misconceptions really come from just judging the ENTJ on the surface, and not understanding where their behavior comes from or what goes on underneath.

There is a harmful stereotype that ENTJs are unfeeling or cold people, who are often immoral this stereotype makes the ENTJ seem extremely selfish and cold. They are pegged as people who only care about getting things done perfectly, and will crush anyone who stands in their way. This represents the ENTJ as someone who doesn’t really care about being moral or doing what is right, they just want to move forward and get things done for themselves. They are viewed as harsh people who don’t really care about the feelings of others, and instead are very focused on efficiency as the most important things. While this comes from the fact that ENTJs do focus on being efficient people, this doesn’t represent them as a whole and leaves out a lot of important factors connected to their personality.

Connected to the stereotype that ENTJs are cold and uncaring people, is the misconception that they are also bad in relationships. Because ENTJs aren’t openly expressive people they are seen as incapable of maintaining a healthy relationship. This complete myth makes it seem like ENTJs are undatable people who just aren’t capable of providing a romantic partner with what they need. They are pegged as someone who cannot be supportive because they lack emotions and aren’t the most morally focused people. Of course, this is entirely untrue and comes from a complete lack of real understanding.

ENTJs are pegged as control freaks, or people who must be in command of everything around them. While ENTJs do have control freak tendencies, this makes them appear incapable of following orders or of listening to anyone else. It causes the ENTJ to look like they are highly aggressive people who just don’t want to leave any room for error or anyone else to take charge of the situation. While ENTJs do like being efficient and are natural leaders, this stereotype takes it to a whole new level of control freak mentality. There is also a stereotype which describes ENTJs are hungry for power to such a degree that they will stomp on anyone who gets in their way. This misconception causes the ENTJ to seem like villains, prepared to crush anyone around them. This makes the ENTJ out to always be someone who is in search of power and constant control.

ENTJs certainly are more focused on efficiency and logic, but that does not mean they are unfeeling people. They are not openly expressive and do sometimes struggle when it comes to expressing their inner emotions. ENTJs might not be great at expressing their feelings, but they still experience them just like everyone else. ENTJs are not unfeeling people and they actually do have their own inner morals which are important to them. ENTJs really do care about others and want to do what they can to help them. For the ENTJ this sense of caring comes from practical means of expressing themselves, instead of being emotional and affectionate in ways most people are used to.

ENTJs are also not bad in relationships, this is an entirely untrue stereotype which has nothing to do with personality types whatsoever. When the ENTJ commits to someone they value this immensely and will go above and beyond to be there for them. When they step into a romantic relationship ENTJs can actually show other sides to themselves that others don’t see. ENTJs can even be romantic people sometimes, especially when they really want to impress someone. They might even be good at grand gestures, and are good at prioritizing their relationships in unique ways. They will do whatever they can to help their partner succeed and will show support whenever it is needed. They might not be the most emotional people, but ENTJ find ways of showing that they care.

ENTJs can have some controlling aspects of their personality, but that doesn’t mean they are incapable of stepping back. When someone is intelligent and brings something valuable to the situation, the ENTJ can often listen to them and hear them out. They are even willing to follow someone else’s lead if they are doing things the right way. ENTJs simply want to be capable of moving forward and care about the end results turning out the best they can. ENTJs do care about being able to reach a certain level of accomplishment in their lives, but they aren’t only focused on gaining power and control in such a malicious and villainous manner.

These stereotypes definitely peg the ENTJ as being some sort of villain who is uncaring and immoral. They seem like the power hungry “bad guy (or girl)” who will do whatever they need to in order to get ahead. This image does not paint the ENTJ very positively and makes others often afraid of them. It causes people to miss out on what the ENTJ has to offer and can be truly harmful to their reputation. Being that these stereotypes also make the ENTJ appear bad in relationships, causes some people to judge them before even getting to know who they are.

Stereotypes can be harmful for everyone involved, because it creates this idea of judging someone before knowing them on a real level. Stereotypes are rarely based on anything true or valid, instead they are drawn from these misconceptions and create this negative image about someone. People are not as simple as their personality types, and have many layers which go much deeper than what you can observe on the surface. ENTJs are unique people, each individual having different behaviors and traits which make them difficult to fit into some sort of small box.