Here’s How You Feel About Omitting, Based on Your Personality Type 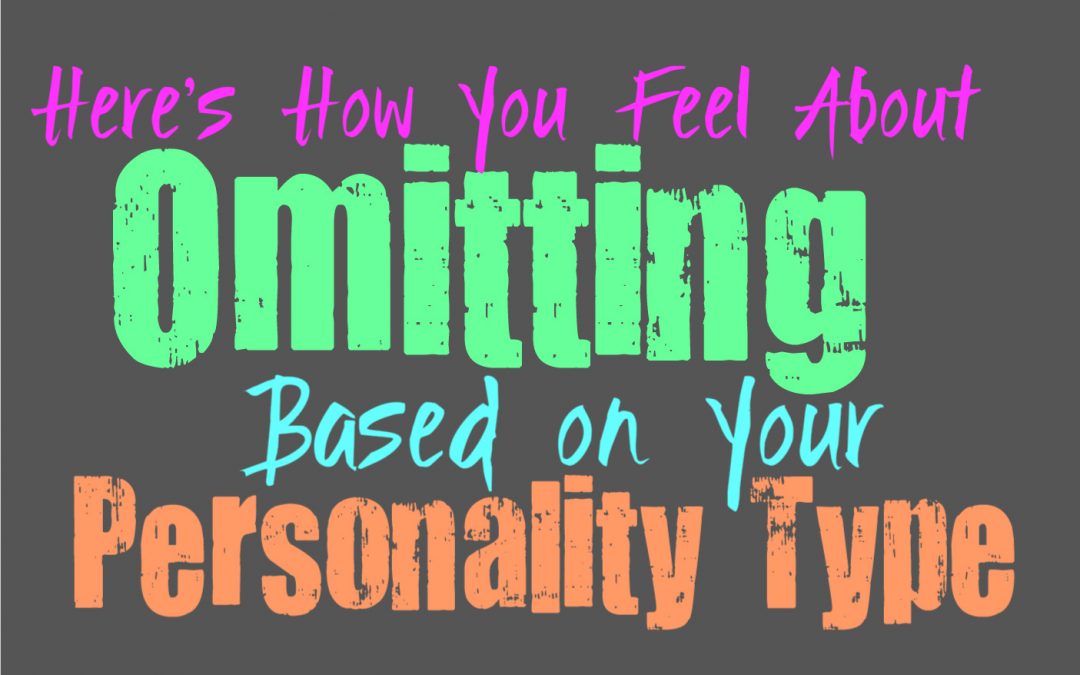 Here’s How You Feel About Omitting, Based on Your Personality Type

While to some omitting is a fair way to keep some privacy, others feel like it is the same as lying. Here is how you feel about omissions, based on your personality type.

INFJs understand the need for privacy, but in many situations they do consider omissions to be lies. When they are in a relationship with someone they understand that small personal things can be kept to oneself. The larger things however should not be omitted and should definitely be shared with one another. For the INFJ it is about realizing which things absolutely need to be shared, especially the more important pieces of information. They want relationships with people who feel comfortable being open with them about pretty much everything.

ENFJs often become annoyed with omissions from their loved ones, and feel like it is the same as lying. It is being insincere to hide these things, even when it is something small. ENFJs want to be around people who are open with them and feel comfortable sharing important things. They dislike when someone tries to hide things and then pretends like it was no big deal. For the ENFJ this type of behavior simply isn’t sincere and often makes it hard for them to trust those people.

INFPs can be very private people, but when it comes to their close relationships they believe in openness. When the INFP is in a committed relationship with someone they don’t want constant omissions. Someone who feels the need to omit important details, often feels the same as a liar o the INFP. They often feel like these things should be shared openly in order to maintain a close bond and a sense of trust in their relationships. INFPs don’t need someone to smother them in order to feel close, they simply want an open line of communication.

ENFPs often believe that constantly omitting major details is definitely the same as lying. ENFPs do have rather active and complex inner minds though, and sometimes they omit things without intending to. For them it is understandable that not all details are easy to be open about, simply because they might not always remember that they haven’t actually discussed these things. They can be understanding but at the same time the more important facts should be shared in the eyes of the ENFP. They believe in having a relationship with trust and sincerity, and always want to be as honest as they can be.

INTJs do believe that it is important to have boundaries even in their closest relationships. While they believe in certain boundaries they also believe in being honest with those they care for. INTJs don’t feel the need to share every tiny detail, but they do believe it is vital to share the important things. They often know the difference between what is minute and what truly needs to be shared with the people they are close to. For them omitting from most people is practical, but omitting from the people they share their lives with is often the same as being dishonest.

For ENTJs omissions are important in most situations, but not when it comes to their close relationships. For them it is important to have loyalty and honesty with the people they share their lives with. ENTJs value people who can be honest with them, and omitting important information is the same as lying in their eyes. They understand that constantly expressing their inner feelings isn’t necessary, and to the ENTJ it is not omitting to keep things like this to themselves. However they believe that omitting things they have done or plan to do, is the same as being dishonest.

INTPs aren’t really fans of sharing all of their personal details, and can be very private at times. They often believe that omitting certain things is acceptable, and sometimes they simply don’t even think to share them. INTPs can have a hard time opening up even to their loved ones, because their active inner minds keep them distracted at times. They also struggle to express their feelings, and might have a hard time knowing how to really open up in this way. INTPs can often omit things without really realizing that this can wind up upsetting their loved ones.

ENTPs are often guarded people, so at times they feel he need to omit things. They don’t like lying to their loved ones, but sometimes they have a hard time opening up. ENTPs can be naturally private with certain personal things, without fully realizing they are doing this. For them it takes time to truly open themselves up to someone to the point where they feel comfortable sharing everything. When the ENTP does omit things from their loved ones, it often does not come from a place of malice, simply hesitation for fear of sharing too much and winding up hurt or judged.

ISTJs definitely value honesty in their relationships, and believe that most things should be shared openly. While ISTJs are private with most people and will omit a lot of personal information, they are different with their family. They believe in building trust and having relationships where things are not omitted. At the same time the ISTJ won’t omit practical information or facts, they do have a time sharing their feelings and will often omit certainly emotional responses.

ESTJs definitely believe it is important to be honest with their loved ones no matter what. They are often’ very upfront people and dislike having to omit or hide things from others. When the ESTJ is close to someone they believe in being sincere with them and will try to always share the facts no matter what. They might struggle to express their emotions, but to them this is not an intentional omission. They simply don’t understand their own feelings enough to truly share them, but ultimately they believe in honesty and loyalty.

ISFJs are often private people, but they do believe in being honest with their loved ones. They will do their best to share important information with their family, but sometimes the ISFJ feels the need to omit. If something could hurt the people close to them, or might disrupt the harmony, the ISFJ might feel he need to omit this. They simply don’t want their words to hurt those around them, and so they might feel like it is best to keep it quiet for a while.

ESFJs don’t like omissions and often feel like they are the same as lying. They often are private when it comes to strangers and will omit certain pieces of information from them. When it comes to their loved ones the ESFJ believes in openness and sincerity with them. There are times when they might omit certain smaller details if sharing them will only become hurtful to those people. When it comes to larger things the ESFJ does believe it is important to be open and honest with them.

ISTPs are often private people and to them omitting things is done naturally. It isn’t necessarily intentional for the ISTP, they simply find it easier to keep things to themselves. They don’t really see omissions as lies, they simply see it as maintaining their privacy and their boundaries. If their loved ones ask them something straight up, they won’t lie about it, there are simply some things they don’t feel like sharing or being verbal about.

ESTPs don’t necessarily believe in sharing every tiny detail with everyone, but they do believe in being honest with their loved ones. The ESTP enjoys being able to share things with someone they are close to, and likes having that comfort to be open. When they feel like their words might be upsetting to those around them, they might omit certain details because of this. ESTPs simply don’t like having to share things that might make them look bad, and sometimes struggle to be open about that.

ISFPs prefer honesty in their relationships and dislike omissions. If they are with someone who constantly hides things then it often feels like a betrayal to them. While ISFPs don’t like omissions, they also dislike arguments. They would rather be around people who make them feel safe and comfortable sharing even the smallest of details. They can sometimes omit things when someone makes them feel badgered about their mistakes, and this often makes the ISFP unhappy.

ESFPs definitely believe in honesty and openness in their relationships. They believe that omitting things can often be the same as lying, but sometimes they struggle with this themselves. The ESFP doesn’t enjoy discord and because of this they might omit certain things to avoid getting into arguments. They want their loved ones to be pleased with them and sometimes it causes the ESFP to omit smaller pieces of information. They don’t enjoy being this way though, since ESFPs do value openness in their relationships. They are happiest when they have people in their lives who make them feel at ease being completely honest.