ISTP In Bed: What the ISTPs Sexual Energy is Like 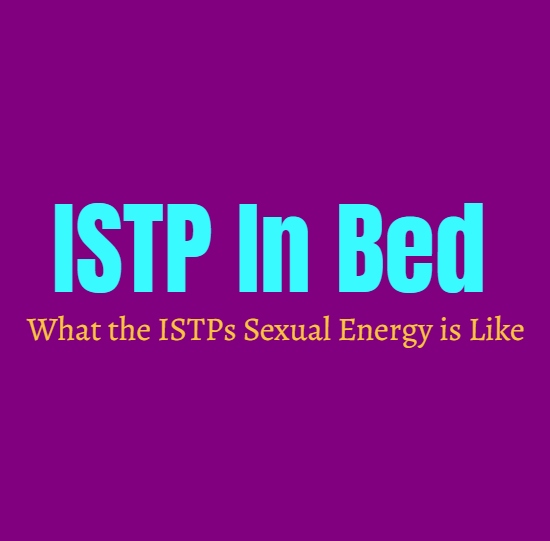 ISTP In Bed: What the ISTPs Sexual Energy is Like

ISTPs are very physical people which oftens means they are drawn to this part of themselves. They can have rather passionate and sensual sexual energies, and enjoy being able to connect with people with way. ISTPs can become very caught up in their physical selves and in enjoying the moment. They are curious and adventurous people who enjoy being open about new experiences. They don’t like feeling stagnant and so when it comes to their sex life ISTPs often prefer to open themselves up to their options and step outside of their comgort zone.

ISTPs often have a rather passionate and playful sexual energy, as they enjoy being able to explore themselves and others. When they are with someone they can become very caught up in the moment and making their partner feel truly appreciated. ISTPs often have a high sex drive but at the same time this doesn’t mean they want to experience this with just anyone. ISTPs don’t trust people easily which is why sex can be something they take more seriously. They might not always want their sexual encounters to be within a committed relationship, but they can be rather picky with who they want to be with. ISTPs aren’t often viewed as emotional people but that doesn’t mean they don’t prefer to have some sort of deeper connection with someone before having sex with them. They might experience trying out different things when they are younger, but they do often prefer an emotional connection to truly enjoy sex. For the ISTP a lot of this is about trust and knowing that they are with someone who they can really be themselves and open up with.

ISTPs are often capable of being open to new things and want a partner who can explore this with them. They do have their limits and often want to be with someone they can communicate with comfortably. ISTPs just don’t enjoy stagnancy and want to take the time to figure out what they like most and what their partner enjoys as well. They don’t want to experience the same thing over and over again, especially if there isn’t some sort of spark or passion involved which can keep them truly excited. They can certainly become caught up in the physical part of sex, and enjoy being able to improve and consider themselves skilled at what they do. ISTPs take some things as a challenge and can be that way when it comes to sex and experiences.

ISTPs might be uneasy about sexual intimacy at first, but can actually really enjoy it with the right person. They aren’t great at expressing emotions verbally but when they really care about someone. ISTPs might want to find their own ways to connect with someone and express how they feel, and sexual intimacy can be helpful for them. They can find it easier to show how they feel in physical ways, and so sex can be a great way to connect with someone they love. It can take time for the ISTP to really find the right way to express this or to break down those barriers, but they want to with the right person. When they trust someone and care about them then sexual connection can actually be a great way to show this to them. Being able to take their time and focus on pleasing their partner really does make the ISTP feel a sense of personal accomplishment and joy. Sex can be a great way for them to really show they care and show they want to be close with someone. They often find that they enjoy it more themselves as well, and can really take their passions to the next love with the right person. ISTPs also enjoy being able to take the time to learn what they like with someone who they trust and can go on this type of journey with.

ISTPs might be okay with casual sex, especially when they are younger. They get caught up in the present moment and want to find ways to explore themselves and what they like most. Sometimes experiencing sex with new people and uncovering what is exciting in the moment can really help them. For the ISTP casual sex isn’t necessarily a bad thing and might be a way to relieve stress and really just soak up the momentary pleasures. While they might be fine with this, that doesn’t mean all ISTPs really enjoy it that much. They might find that they prefer to be with someone they trust and feel close to, and really don’t feel like casual sex is as rewarding as being with someone they love.