How Important Efficiency is for Each Personality Type 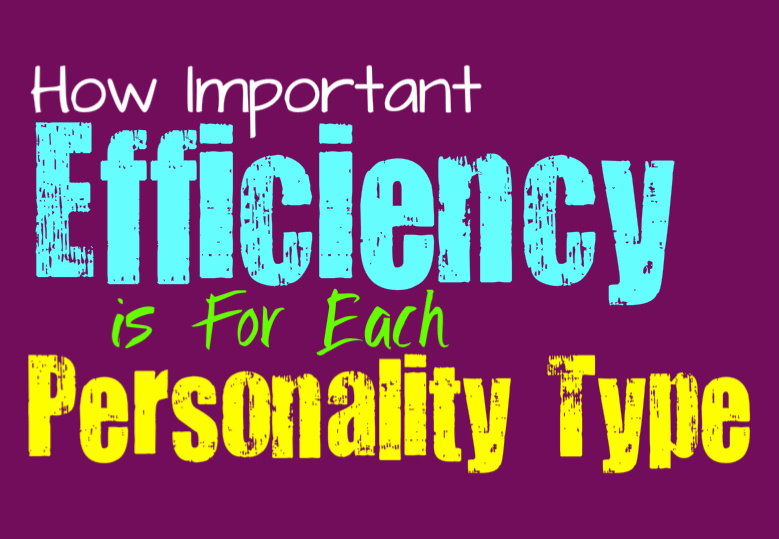 How Important Efficiency is for Each Personality Type

Some people become extremely frustrated with inefficiency, while others simply do not care. Here is how important efficiency is for each personality type.

INFJs can be perfectionists, but this is usually focused more on themselves than others. INFJs can be very understanding when other people make mistakes, especially if they feel embarrassed by this. When it comes to their own actions though, INFJs often demand efficiency in themselves. They want to live up to their own expectations even though they are set rather high. INFJs will become disappointed in themselves if they feel like they aren’t accomplishing their goals or tasks properly. This is something that they definitely need to work on, since they can put way too much pressure on themselves to perform efficiently. INFJs also put a lot pressure when it comes to making moral decisions, and want to do the right thing.

ENFJs are often perfectionists, and will put a lot of pressure on themselves to perform well. They do prefer efficiency in their lives which is often why the ENFJ will take on most tasks themselves. In order to prevent errors, they often feel it is best to get things done on their own. ENFJs rarely ask others for help, instead they will take on more and more tasks and errands until they are overloaded. ENFJs want to be successful in their endeavors, and will work very hard to get things done properly and efficiently. They often have their own unique way of doing things, but it works out very well for them.

INFPs often do not care about efficiency all that much, and consider other things to be much more important. They are focused on making the right moral choices in life, and prefer to focus on being caring individuals. INFPs can put a lot of pressure on themselves, but this is more based on their need to be a good person. They would much rather be creative and imaginative, than focus on efficiency. INFPs are aware that sometimes the long way or the messy way, will lead them to something truly magical. They prefer to do things their own way, and that can sometimes appear less efficient to others.

ENFPs enjoy doing things their own way, but they are often very skilled at most activities. They enjoy getting things done the right way, and can sometimes put pressure on themselves. ENFPs often prefer to focus on creativity and imagination, more than efficiency. They can sometimes take the long way to getting something done, but they usually accomplish the task in a more creative and impressive way than people expect. ENFPs usually try to go easy on other people, so they don’t want to be too harsh if someone is being inefficient. They will try to be patient and help them figure out the best way to accomplish the task at hand.

INTJs are actually extremely focused on efficiency and awareness. They prefer to get things done the most efficient way possible, and can become short tempered with people who cannot do this. INTJs are constantly learning and researching new topics which helps them to remain more aware of things. This is because the INTJ hates feeling ignorant and inefficient in any situation. They want to be as educated as possible so that they can accomplish their goals and perform tasks to the best of their ability. INTJs can become frustrated if they feel like people are not being efficient, especially in situations where they should be getting things done properly. Taking visits to certain offices or various companies that appear to run less efficiently than they should, will really cause the INTJ to become annoyed. They can often see how things could be run better, and this becomes irritating for them if they cannot change things.

ENTJs are extremely focused on efficiency and find it important to be knowledgeable and competent. They become frustrated if they are around people who are inefficient and ignorant, and might even lose their temper if these people will not listen to the ENTJ. They often put a lot of pressure on themselves to get things done to the best of their ability, and will do whatever it takes to rise to the occasion. One of the biggest pet peeves for an ENTJ is someone who lacks proper skill and efficiency. They simply believe that people should work hard and focus on the task at hand. They realize that people are often more capable than they give themselves credit for, if they would simply put forth the proper effort.

INTPs have vivid imaginations, and are often more focused on thoughts and analysis than they are efficiency. They realize that sometimes things have to be a bit messy in order to discover new possibilities. They do however, find it important to be efficient in certain things and are often very capable of seeing the best course of action. INTPs don’t like bossing people around though and because of this they might fail to push their ideas onto others. Even though the INTP can often see the best path to take, they realize that most people will not take their advice and won’t waste their time on those individuals. INTPs hold themselves to very high standards, and can put a lot of pressure on themselves to perform.

ENTPs enjoy trying new things, and often jump into them head first. They know that sometimes life is a bit messy, which means they might not always be as efficient as they would like. ENTPs enjoy taking on new hobbies and tasks, in order to learn and grow from them. ENTPs believe that certain things should be run efficiently though, and can often see the best way to get the job done. They simply prefer to be left alone, and want to do things their own way in order to truly learn from it. They are more than capable of being efficient, they just prefer to break things down sometimes.

ISTJs find efficiency to be very important, and actually put a lot of pressure on themselves to get things done properly. ISTJs can become frustrated if they do something wrong, and will work even harder to perform next time. They also become annoyed if other people are not putting forth enough effort, but will often try to remain patient with them. ISTJs especially favor efficiency in the workplace, and believe everything should be performed to the highest of quality. They are hard-working individuals, and feel disappointed in themselves if they cannot get things done that meet their rather high standards.

Efficiency is extremely important to ESTJs, since they are hardworking and driven individuals. They often become frustrated with people who are not efficient, and will not be afraid to express this outwardly. They can be a bit pushy towards others, especially if they feel like they aren’t getting the job done properly. ESTJs will often take on many tasks by themselves, especially if the people around them are not getting things done right. They are perfectly happy to teach others how to perform a task the right way, but they simply become annoyed if people are not paying close attention. ESTJs have extremely high standards for others, but even higher standards for themselves. They believe in doing things the right way, and do not want to fail at this.

ISFJs definitely enjoy efficiency, but they do not get upset with people who make mistakes. They are especially forgiving when it comes to their loved ones. They do not want to upset people by telling them that they have made a mistake. ISFJs are sensitive to the emotions of others, and will sometimes take on tasks themselves in order to get it done without hurting someone else’s feelings. They put a lot of pressure on themselves to get things done the right way, especially when their actions are affecting their loved ones.

ESFJs are caring people, but they value efficiency very much. They often take on so many tasks by themselves, because they fear others will not be able to perform to their standards. They can become frustrated if they feel like people are not doing the best at their job. ESFJs believe in working hard no matter what your job is, and believe people should be the best at what they do. If someone is being lazy then the ESFJ will actually become rather annoyed by this. They care about the feelings of others, but also dislike inefficiency in many situations.

ISTPs enjoy problem solving, and are often skilled at getting things done properly. They can often put a lot of pressure on themselves to be efficient, and want to be good at what they do. ISTPs are intelligent people, which often causes them to analyze a task before moving forward. Their ability to analyze and problem solve makes them skilled at many different things. ISTPs are often laid back individuals, which helps them when they are surrounded by inefficient people. They do however, prefer to be on their own and do best when they don’t have to deal with other people.

ESTPs are often very efficient people, and enjoy getting things done to their own high standards. They can become frustrated by people who are inefficient, and will attempt to take control of the situation. ESTPs are not afraid to take on many different tasks, simply because they know how they like things done. They can be particular about certain things in their lives, simply because they dislike making mistakes. ESTPs are capable of moving on when something doesn’t go as planned, but they do prefer to have things done efficiently in their lives.

ISFPs enjoy being around people who are laid back and fun. They do not care much about efficiency, and are much more concerned with the quality of someone’s character. ISFPs understand that life is about making mistakes, and are not afraid to get their hands dirty. They are more focused on enjoying life and making the most out of the present moment, and aren’t really concerned with efficiency. They want life to be joyful, and are compassionate people. They do not become angry if someone makes a mistake, and dislike embarrassing others because of this.

ESFPs prefer to live life in the present moment, and because of this they don’t get too caught up on efficiency. They are often skilled at many different things, but don’t mind making mistakes. ESFPs understand that life is about making mistakes, and are not afraid of fumbling a bit. They enjoy taking on new experiences and will often jump head first into something. ESFPs don’t become upset with people who aren’t performing perfectly, and can often be rather patient in these situations. They care more about the feelings of others, and don’t want to upset someone or seem like they are being grumpy.