Are You an Enabler of Bad Behavior, According to Your Personality Type 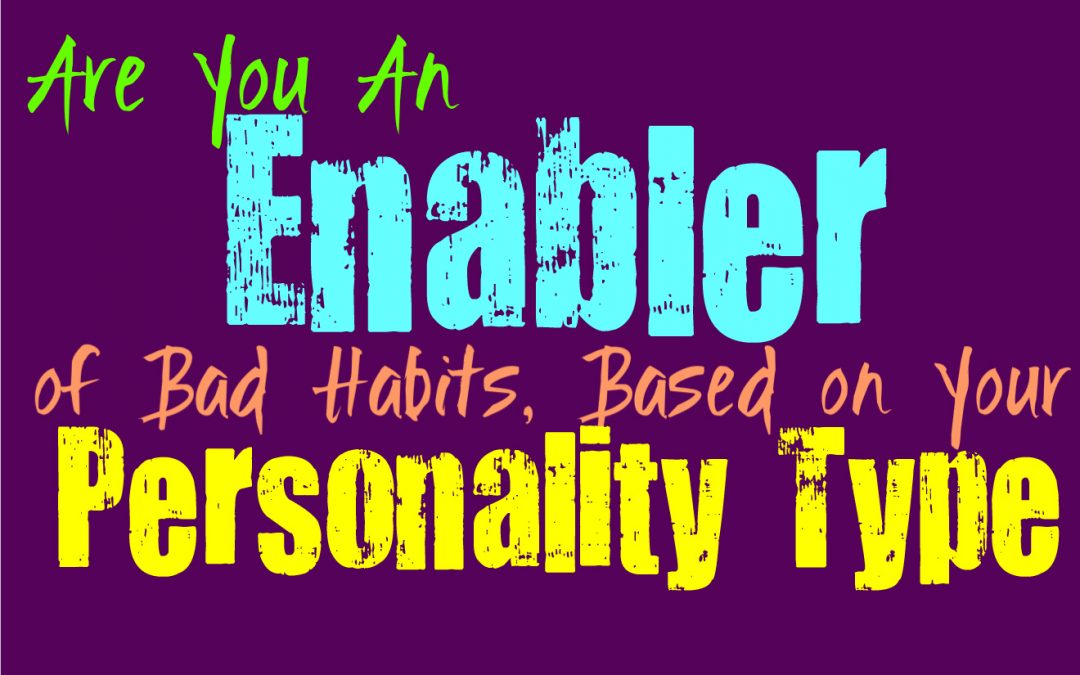 Are You an Enabler of Bad Behavior, According to Your Personality Type

Some people have a tendency to enabler their loved ones, simply because they don’t want to be hurtful towards them. Others realize that sometimes they need to be a bit blunt in order to really help the people they care for. Here is how much of an enabler you can be, based on your personality type.

INFJs can certainly be enablers sometimes, even though this is not their intentions. They can be both givers of tough love, and people who are a bit too soft towards others. For the INFJ it depends on the person and the situation, and if they are fearful of how fragile that individual might be. INFJs don’t want their actions to hurt someone or push them further in a more painful direction. Sometimes they can be enablers towards people they love deeply, but they do often know when the line has gone too far. If they recognize that someone needs to be pulled back and shown their actions are wrong, the INFJ will do their best to be sincere and help them improve.

ENFJs can sometimes be enablers, since they have a hard time turning down their loved ones. They want to do whatever they can to make others happy, and this people pleaser attitude can result in being a bit of an enabler. They don’t intend to enable bad behavior, but they also don’t want to do anything that might upset someone they care for. ENFJs often step in and clean up the messes of their loved ones, which can result in enablers their mistakes and negative behavior.

INFPs are sincere people, who try not to do anything that might enabler the bad behavior of their loved ones. They want to be completely open and sincere in their relationships, and don’t want to pretend that things are great when they are not. INFPs will often be honest when someone isn’t making choices that seem moral or good for them, but they try to deliver this in a kind manner. INFPs don’t like enabling people if this is simply going to cause them pain in the long run.

ENFPs don’t usually like enabling bad behavior, especially with people they care for deeply. They want to be there for their loved ones and sometimes this means being honest when they are making mistakes. ENFPs believe that it is important to be completely open and honest with their loved ones, instead of being fake and simply pretending they approve of their behavior. They do also believe in giving people space, so they don’t like letting their sincerity push people away or make them feel like they are judging them. ENFPs just want to be open and connect with the people they love in a more sincere manner.

INTJs are certainly not enablers, and often they become annoyed with people who are. For them it is important to be honest with people, especially with the ones they care for. They don’t really believe in sugar coating things, and often feel like this is useless and fake. INTJs will be honest with someone who is making mistakes and might even do their best to inform them of how to improve their situation. When the INTJ is upfront about something it doesn’t come from a place of rudeness, their intentions are often to be helpful.

ENTJs are not often enablers, especially when it comes to the people they care for. They want to help people better their lives, but not in a way that simply enables their bad behaviors. ENTJs will do their best to show people how to make their situation better and become more efficient in their actions. They don’t like pretending that someone is doing just fine when in fact they are making horrible choices. For the ENTJ it is better to be honest and upfront, rather than sugar coat things in an insincere manner.

INTPs really don’t like being enablers, but at the same time they don’t often stick their nose into other people’s business. If someone they love is asking for sincere advice then they don’t want to be dishonest or do anything that might enable their bad behavior. Instead the INTP wants to be completely honest and helpful when someone is looking to them for advice about something. They aren’t often enablers of bad behavior, especially when they can clearly see the best way for someone to improve.

ENTPs don’t like enabling people, especially if they can see a clear way for them to improve their actions. They believe in being supportive of their loved ones, but to them this means being completely honest with them. ENTPs would rather be sincere and upfront with someone, and to them this is a true sign of respect and consideration. They don’t believe it is helpful to sugar coat things just to make someone feel better, instead they want to be truthful in order to help them better their situation.

ISTJs aren’t often enablers, since they believe in being honest and sometimes a little bit blunt. They don’t like holding things back and sugar coasting just so someone does not get upset with them. ISTJs just aren’t naturally good at dealing with emotions, and so they rarely feel the need to enable someone by being too sensitive towards them. While they care deeply for their loved ones, ISTJs often feel that honesty is the best way to show their respect.

ESTJs aren’t usually enablers of bad behavior, at least not in the verbal sense. They won’t pretend that someone is doing perfectly fine, when in truth they know they are making mistakes. The ESTJ will make it known that the person they care for is failing and will do their best to show them how to improve. If someone they love is in trouble though, the ESTJs might turn into a bit of an enabler in order to protect them from any harm.

ISFJs can definitely be enablers, only because they want to take care of their loved ones and make them happy. They are people pleasers and sometimes this desire to make others happy can certainly cause them to enable their bad behavior. ISFJs don’t want to say or do anything that might hurt someone else, so they often sugar coat their words. This desire to remove any pain or unpleasantness from others, can sometimes cause them to become enablers.

ESFJs can definitely be enablers sometimes, especially if their loved ones appear more fragile. They simply don’t want to hurt the people they love and will do anything they can to take care of them. Sometimes the ESFJ will step in and fix a problem for someone, just to avoid seeing them make mistakes. This can enable that bad behavior, instead of show them how to improve. ESFJs simply don’t like witnessing their loved ones suffer, and so they try hard to protect them from this.

ISTPs don’t like enabling people, instead they strive to be upfront and honest. ISTPs are often very factual people and so sometimes they can come across as a bit blunt. They prefer to be honest and let people know when they are making major mistakes. ISTPs don’t want to pretend someone isn’t living in bad habits, instead they want to try and help them find ways to improve their situation to the best of their abilities.

ESTPs try not to be enablers, instead they believe it is important to be honest with their loved ones. They are sensitive to the emotions of the people they love, but they want to be honest with them. If someone they care about is making mistakes which will hurt them, the ESTP wants to help them improve their situation. They will actually show their support by being upfront and trying to find ways that they can help.

ISFPs can sometimes be enablers, mostly because they don’t believe in trying to control or change people. If someone they love is making mistakes the ISFP just wants to be supportive and helpful. They will be there for someone if they are struggle, and while they will be honest with them they don’t believe in trying to fix their mistakes for them. ISFPs can enable by being overly sensitive to someone emotionally, instead of being a bit blunt when they should be.

While ESFPs do their best to help their loved ones improve their lives, sometimes they can be enablers. When someone they care for is a bit fragile the ESFP might be afraid of hurting their feelings too much. ESFPs have a tendency to fall into someone’s cries for help, and will do their best to help them feel better. Sometimes this causes them to enable the bad behavior, since they are more willing to be sensitive to their emotions than be blunt when they need to be.