Does It Come Natural for You to Put Others First, Based on Your Personality Type 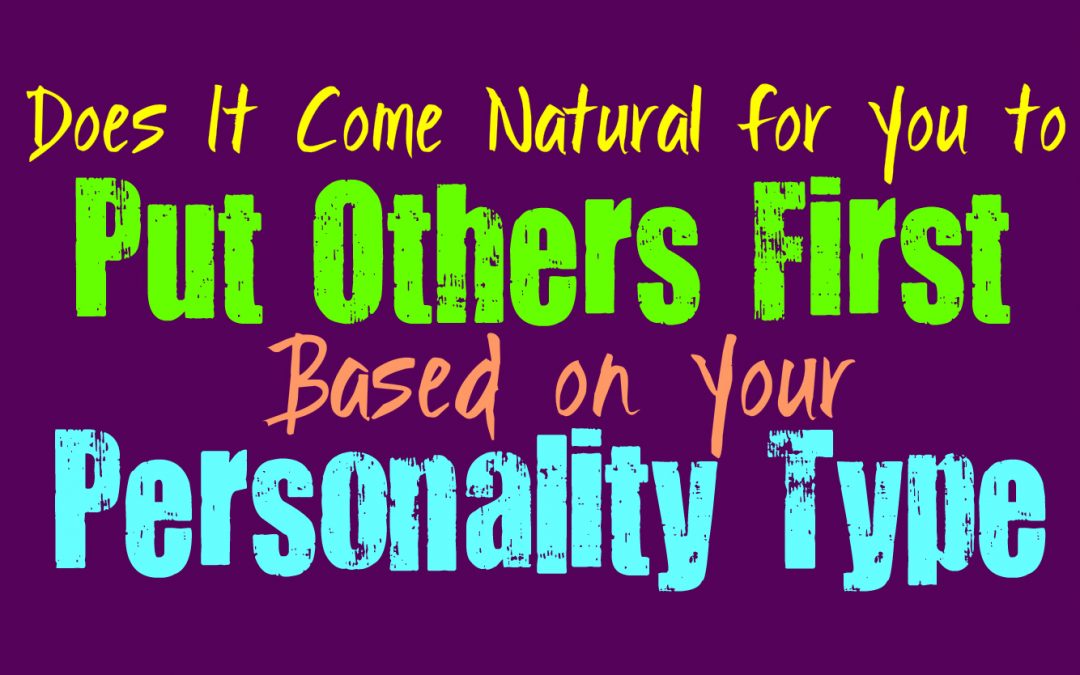 Does It Come Natural for You to Put Others First, Based on Your Personality Type

Some people find that it comes natural for them to prioritize the needs of others, and put those people first. For others it is more natural to prioritize their own needs, even if they to focus on others as well. This isn’t about caring for others or working to make them happy, it is about what comes natural for you as far as the needs of those around you. Here is how easily you put others first, based on your personality type.

INFJs do naturally focus on the needs of others often above their own, especially when it comes to their loved ones. This isn’t something they need to force themselves to do, it just happens naturally for them. INFJs are so in tune with the emotions of others and so it becomes natural for them to tend to their needs. While INFJs are capable of prioritizing themselves when they take a step back and analyze the situation, this isn’t actually their natural response most of the time.

ENFJs do naturally put others first, especially the people they deeply care for. It is simply their natural response to focus on the emotions and needs of those around them. ENFJs can sometimes neglect their own needs because of this and find themselves solely focused on taking care of others. In order to prioritize themselves, the ENFJ needs to take a step back and analyze the situation. It is natural for them to put others first and to focus much more on what the people around them want.

INFPs do care deeply for their loved ones and will do just about anything for them, but they don’t just naturally put others first. For the INFP putting others above themselves is something that takes forethought and is a decision they make intentionally. Naturally INFPs are drawn to their own internal emotions and will focus on their desires and sense of morals to make decisions. While INFPs do often put others first, this isn’t something that just happens naturally and instead occurs because they sincerely want to do this.

ENFPs don’t naturally put the needs of others first, even though they care deeply for their loved ones. ENFPs are likely to do just about anything to protect the people they love, but that doesn’t mean it comes naturally for them to prioritize their needs. ENFPs are very drawn to their own inner emotions and desires, and so this is what comes naturally for them. ENFPs understand their own inner emotions and use them to most many of their choices in life. While they will be capable of prioritizing their loved ones, this is something they make the choice to do and isn’t just natural for them.

INTJs don’t find it natural to put others first, since they are more focused on being efficient and expanding their minds. INTJs are focus on growth and find it natural to prioritize their own needs and wants in life. This doesn’t mean they are incapable of putting someone else first, it just has to be a conscious decision that they make. INTJs want to be sure they can trust someone and that that person actually deserves to be a priority. For the INTJ it is simply natural for them to put their own needs first, and would require sitting down and thinking about it before changing this way of behaving.

ENTJs find it much more natural to put their own needs first, but that doesn’t mean they are incapable of changing this behavior. They are just naturally focused on being efficient and doing what their minds tell them is best. They focus on learning and are always striving to grow and work towards their goals. ENTJs prioritize their own goals in life, simply because they have a strong sense of independence. While ENTJs are naturally focused on putting their own needs first, once they care for someone they can certainly shift this behavior.

ENTPs don’t naturally put the needs of others first, since they are more focused on going after their own experiences. They are very independent people which is the main reason why putting others first just doesn’t come naturally for them. That doesn’t ENTPs aren’t capable of prioritize the needs of someone they love, it just means it takes more effort and the conscious choice to do this. When ENTPs care for someone they often make the choice to start putting their needs first, since they can be very giving people.

ISTJs do care for their loved ones and find it natural to take care of them, but they often put practicality first. ISTJs aren’t focused on the emotional needs of others, but they are often good at putting them first in some ways. While most people see the ISTJ as focused on getting things done and taking care of themselves, they actually work rather hard to take care of others. While they might not put everyone else first, they will put their close family or romantic partner first rather naturally.

ESTJs are often seen as efficient and sometimes cold people, but they actually do put others first naturally. While they might not put everyone first, they do prioritize their close loved ones and family. When the ESTJ has a family they take care of, they definitely put them first. The ESTJ will often sacrifice their own needs and work hard to take care of others, and this is something that comes naturally for them much more than people realize.

ISFJs will naturally put others first, almost to a fault. They do whatever they need to in order to take care of the people they love and make them happy. It is natural for the ISFJ to tend to the needs of those around them and put them first. ISFJs sometimes neglect their own needs unintentionally, since they are so focused on taking care of others. ISFJs don’t need to force themselves to prioritize their loved ones, this just comes naturally.

ESFJs naturally put others first, and find themselves often sacrificing their own needs to take care of their loved ones. ESFJs don’t need to focus on putting others above themselves, this is something that often happens naturally for them. They sometimes forget to tend to their own needs because they are so focused on taking care of others. For the ESFJ simply do whatever they must to take care of their loved ones and work hard to make them happy.

ISTPs don’t naturally put others first, simply because they are such independent people. They focus on tending to their own inner thoughts and doing what feels right for them. While ISTPs care for the people in their life, it just isn’t natural for them to put their needs first. ISTPs can certainly make sacrifices for their loved ones, but this is something they have to make the choice to do. ISTPs are so focused on the present moment that sometimes they can become distracted by outside things.

ESTPs do naturally put their loved ones first, but for them it depends on the circumstance and how they are feeling in that moment. ESTPs can bounce around depending on what they are feeling, and sometimes will naturally put their own desires first. For the ESTP each circumstance will be different and things will change depending on their current mood or focus. They often balance who they prioritize, and this is something that does happen naturally.

ISFPs don’t really find it natural to put others first, since they are so focused on their own internal emotions. They do what feels right for them in the moment, which can cause them to bounce around a bit. While ISFPs care for their loved ones and will do a lot for them, they simply put their own emotions first because this is what comes naturally for them. The ISFP is deeply caring and loving, and will often sacrifice a lot for the people they love but this is something that takes conscious effort.

ESFPs naturally focus on living in the moment and doing what feels right. They follow their hearts and sometimes this does lead them to putting others first. For the ESFP it entirely depends on how they feel in that moment, and they will follow wherever this might lead. In some cases this does mean putting others first, and they will sacrifice their own needs and happiness to do this. In other situations the ESFP is more focused on prioritizing themselves and their own needs if that is what feels right for them.