INTJ Writers: How the INTJ Can Overcome Writer’s Block 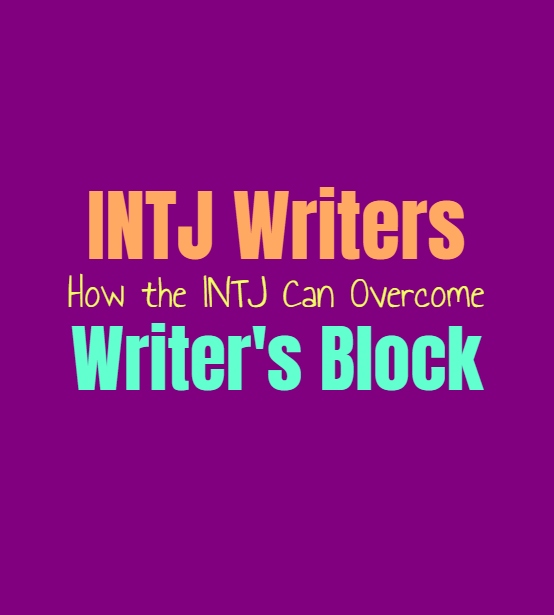 INTJ Writers: How the INTJ Can Overcome Writer’s Block

For some people writing is almost as natural as breathing. Their words are important to them and being able to string them together in just the right ways, helps them to truly express their inner selves and emotions. Writing can be a powerful tool to help us share who we are, but also to convey a message that might be challenging to speak out loud. Writing also can help people connect to one another, and find unique ways of venting out those inner feelings and even learning how to understand them better than we did before. For some people writing is deeply important to who they are and how they share themselves, while for others it doesn’t share this same value.

INTJs might not be viewed as poetic or naturally drawn to writing, but this can definitely be a misconception about them. INTJs love to do research and they often cherish hours spent reading and diving into a fulfilling book. From a young age they often find themselves drawn to the written word, and in being able to absorb information this way. What many people don’t think about with the INTJ, is that they not only enjoy time to themselves but they also have creative and imaginative inner minds. There is so much going on inside of them, and there is more than just the logic aspect of their minds which is something that needs to be considered.

INTJs can often surprise people with their poetic side, as many of them have a way with words. INTJs might not be the types to share their writing with the world, but they are often great at it. For them putting their thoughts down into writing can help them sift through all of the complex ideas and information. They have so much going on inside of them and having the time and ability to work through it can be really rewarding for them. INTJs don’t need to constantly be around other people, and actually prefer time alone to think and reflect. Writing can be a great tool for reflecting and cataloging all of their inner thoughts and ideas. While they don’t always share this writing, that doesn’t mean it won’t be valuable for the INTJ.

INTJs can actually have a creative and poetic side, and their writing is often complex and even beautiful. When the INTJ decides to let this part of themselves out for a bit, they can create some really unique and in-depth work. INTJs are logical people but that doesn’t mean they don’t need a creative outlet to help them process everything inside of them. They might not feel as open sharing this type of writing with others, but when they do the INTJ might be surprised by the response they receive. Being that they are often well-read, INTJs have an affinity for words and being able to string them together in just the right ways. They might even enjoy paying attention to certain word pairings, and how some can sound so much more poetic and appealing than others. They can apply their analytical minds, but also their creative aspects as well when it comes to their writing. While some INTJs might dismiss anything which doesn’t seem to have a point or is illogical, there is so much more to them than just this. INTJs are capable of seeing past the surface, and into the aspects of writing which appeal to their analytical and logical minds.

Perfectionism can often be one of the biggest causes for writer’s block with the INTJ. They are very focused on getting things perfect and don’t like feeling as if they could have done better. If the INTJ goes over their work they can often be rather hard on themselves. They judge their own accomplishments and work much harsher than they do for anyone else, and often feel like they could be doing a better job at something. This can cause the INTJ to experience writer’s block, especially when they put a lot of pressure on themselves to do a good job with their writing. When the INTJ invests time and energy into writing something, they want to be sure they are meeting their own rather high standards. They will likely go over it many times, and never truly feel like they have done a good enough job. This is something which makes it challenging for them to move forward sometimes, since they find themselves feel stuck because of doubt. While INTJs are naturally confident people, that doesn’t mean they don’t even struggle internally. For them it is difficult to proceed with something if they don’t feel like they are really fulfilling their own potential. The INTJ will need to take a step back when they are feeling writer’s block, and allow themselves a moment to really remember their own abilities and regain this sense of confidence in themselves.

A big writing struggle for the INTJ can be connected to the emotions of their writing, and this is where they might get blocked up. While focusing on emotions isn’t easy or natural for the INTJ, that doesn’t mean they are incapable of this. They need to take time to dive into these feelings even if it can feel a bit uncomfortable at first. Their desire to be alone and avoid focusing on their emotions can sometimes hinder them as writers, especially if they are working on fiction which includes characters who possess emotions. This is where the INTJ might need to take time to experience those parts of themselves, or else they might find themselves blocked up when they are trying to work on their writing and improve it where they can.