INTJ Friendships: How the INTJ is as a BFF 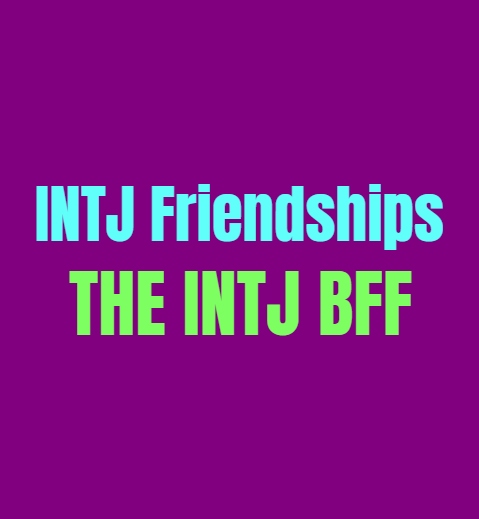 INTJ Friendships: How the INTJ is as a BFF

When it comes to relationships, your close friendships are truly important. We cherish these connections because without them we often feel a sense of loneliness. While having a romantic partner is certainly nice, that doesn’t mean friendship isn’t just as important or even more important for some people. Having someone you can trust and rely on no matter what, someone who simply wants to spend time with for who you are, that is a valuable thing. Each person has a different idea of what they want from a friend, and what they think is most important in these types of relationships.

While INTJs might not be the most affectionate and expressive people, that doesn’t change how they value their relationships. For the INTJ close friendships are actually extremely meaningful and important. They take their connections very seriously, especially the people closest to them who they interact with intentionally on a constant basis. When the INTJ considers someone their friend, this is something which means a lot to them and they don’t want to take this commitment and connections lightly. Most people don’t realize what the INTJ can be like as a best friend, and just how much they really do care about those closest to them.

The Best of the INTJ Best Friend

INTJs are fiercely loyal people who will stand by their friends and loved ones. When they care for someone they really do take this commitment seriously, and believe in standing by their friends. They are the type of people who will protect their friends, and stand by them when no one else will. INTJs don’t care about what others think, instead they care about the people closest to them and rely on their own personal opinions and views. INTJs believe in supporting their friends and standing by them when they are struggling. While they might not believe in pretending their friend is right when they aren’t, that won’t change their sense of loyalty. INTJs fight for the people they care for, and will protect them against those who wish to harm them. INTJs won’t simply abandon a friend because there is someone else wanting to take their place, they have a sense of morals when it comes to their close connections and relationships and don’t believe in just tossing those people aside.

INTJs are honest friends, who will be upfront with people no matter what. They don’t believe in pretending or being insincere, and so they strive to be completely honest with people. When their friends need some direct advice the INTJ is more than capable of giving this to them. They also believe in giving their opinion only when they are capable of being helpful as well. INTJs don’t just approach their friend expressing that something has been done wrong and that it needs to be fixed, they also approach them with helpful solutions. INTJs won’t point out a problem without having some sort of logical and strategic means of solving it. They actually enjoy helping their friends and work hard to come up with ways to make their lives better. They are often big supporters of their closest friends and will do whatever they can to help them achieve their goals and reach their full potential in life. When the INTJ is your best friend, they not only work hard to achieve their own dreams, but work just as hard to help you achieve yours. They believe in the people around them, which is why they choose to be close to them.

The Worst of the INTJ Best Friend

While INTJs are honest people, sometimes this can cause a strain on their relationships when they are too harsh. INTJs aren’t naturally connected to their sense of empathy or emotions, and so they have a hard time recognizing when they are being a bit too blunt. They don’t at all intend to hurt people, they just believe in expressing this clearly and directly. When they are trying to explain the facts of a situation it can sometimes be hurtful and upsetting for people who are a bit more sensitive to their words. This is one of the more challenging traits with the INTJ, especially when it comes to their close friendships. INTJs often believe in being direct with the people they love and care for, for them this is a sign of respect. They simply need their friend to be capable of approaching them with a sense of honesty and without being overly emotional about it. INTJs are willing to adapt and work hard on their relationships, and so if their friend is willing to make the step of explaining why their harshness can be hurtful, they will often be capable of working on this for them.

INTJs also can be hard on the people they love and want to see them push themselves to achieve their goals. They do this from a place of caring, but it can be draining for people at times, especially those who work at a slower pace. The INTJ is even harder on themselves when it comes to getting things done and being efficient, but when it comes to their friendships sometimes people just don’t want to be pushed. INTJs only do this with people they see potential in, and it actually comes from a place of believing in this person and seeing the good in them, since they don’t waste their time with those they don’t feel are worth the energy.

INTJs have some challenging qualities as friends much like any personality type or individual person does, but ultimately they can make for amazing supporters. They are loyal in a way that so many people lack, and believe in standing by the ones they care for. When the INTJ commits to someone they won’t turn their back on them for foolish reasons, and will be willing to work hard to keep this connection going.