ISFP Weaknesses, Flaws and Shortcomings: Where the ISFP Feel Challenged 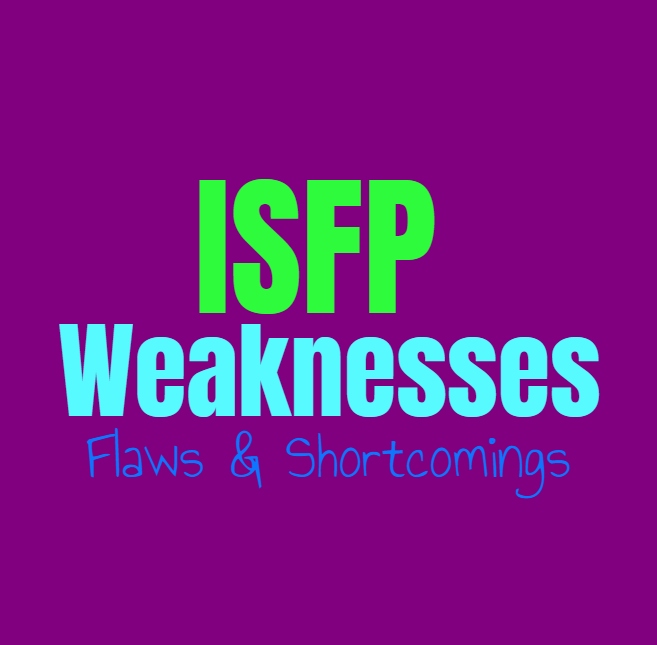 ISFP Weaknesses, Flaws and Shortcomings: Where the ISFP Feel Challenged

Like anyone else ISFPs possess certain natural weaknesses or places where they struggle. While they have plenty of strengths and positive qualities, they do have certain areas where they can feel challenged. For the ISFP dealing with these challenges isn’t necessarily something which comes naturally, since they are more focused on living in the present and enjoying the moment as it comes. They are lighthearted and caring individuals, who want to be able to soak up the positive experiences around them. ISFPs can see beauty in the world where others might struggle to do so, and want to be able to focus on this beauty rather than the things which seem to drag them down.

They Rarely Plan Ahead

ISFPs can struggle to plan ahead with things, wanting to live in the present moment. While being able to enjoy the present and take action when they want to is a great thing, it can also hold them back at times. The things which are their strengths can also be their weaknesses, and this is certainly something which can be both for the ISFP. They struggle to really see too far into the future, and so they don’t plan ahead for most things. They seek out what they enjoy in the moment and the things which make them happy now. They might have a hard time really focusing on long and detailed plans, not knowing how to remain focused on this. While ISFPs are capable of planning for some things, having to come up with long-term plans can be draining. This can make it hard for them to plan for their future or figure out certain goals which they want to achieve. This doesn’t mean they are incapable of working towards future goals, but it does make it a bit challenging for them. Instead the ISFP just goes with what feels right in the present, and might not be able to see around the corner with most things. They see what is in front of them, and aren’t really good at working towards a more long-term and complex goal for their futures. This can certainly get them into tricky situations at times, especially when they take action without considering the future consequences.

ISFPs struggle with criticism, and might even perceive someone as insulting them when they aren’t. They can take certain comments as being critical, even when it wasn’t directed at them to begin with. They have a hard time letting go of perceived slights and might feel personally attacked because of it. ISFPs are a bit more sensitive to these things than some other types might be, struggling to really process when they feel like someone has hurt them or attacked their character. ISFPs might even feel criticised simply because someone doesn’t share a similar moral or ideal as them. This doesn’t mean they are constantly or overly sensitive people, they simply perceive things different than others might. They can struggle when it comes to criticism from their loved ones, and don’t really know how to process this without becoming hurt by it. They want the people they love to see them positively, and don’t like feeling as if they see the bad in them. When the ISFP loves someone they often see the good and beauty they possess, and so when someone else can see their flaws it can be difficult to take.

ISFPs can appear indecisive because they often bounce from one thing to do the next. In reality the ISFP has high standards for themselves, wanting to be able to find things which perfectly fit into their ideals. They often want to go after some sort of inner dream or desire, and have a hard time settling for anything less than this. It makes them appear indecisive, since they can jump into something only to find it doesn’t meet those standards or fit into the ideal they so desperately want. The ISFP is often searching for things which can live up to those expectations, and don’t want to settle for anything less. This makes them seem rather indecisive since they bounce from one thing to the next, when in reality they are often searching for that dream scenario.

ISFPs can be very stubborn and unmovable when it comes to their beliefs and inner morals. When the ISFP believes something to be important they don’t change their minds easily and can be rather stubborn about this. They have strong inner morals and ideals and when someone attempts to challenge this they can become very angry and frustrated. ISFPs are not naturally argumentative people, but they can be stubborn about the things they value and believe in. This is something which is both a strength and a weakness for the ISFP personality. Being someone who knows what they believe in makes them capable of standing up for those values and beliefs. At the same time this can be taken to a difficult level for the ISFP, causing them to become stubborn about things they should consider listening to others about. It can make it hard for them to really notice other viewpoints and understand where someone else is coming from when they are stuck on their own inner beliefs.