INTP Myths, Stereotypes & Misconceptions: Cliches and Tropes That Are Inaccurate 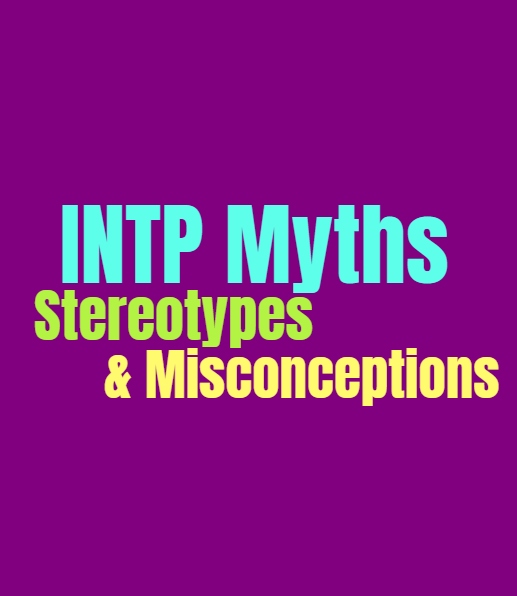 INTP Myths, Stereotypes & Misconceptions: Cliches and Tropes That Are Inaccurate

Each personality type has a handful of stereotypes and misconceptions connected to them. These often come from people who haven’t taken the time to truly understand what goes on beneath the surface. Sometimes the slightest errors or behavior causes people to believe that these personality types are all tied to this one trait, which is completely unrealistic. INTPs are logical people, and because of the way their minds work so internally there are many misconceptions about them which have led to some untrue and unpleasant stereotypes. It is important to understand the different variations and behaviors of each personality type, but also to dig deeper into understanding the individual and not just their type.

One of the most common stereotypes for the INTP is that they are cold or uncaring people. They don’t easily express things in an obvious or emotional manner, and so people become convinced that they aren’t affectionate people. This leaves people believing that the INTP is actually standoffish and does not want to connect. This stereotype was developed from a lack of true understanding or insight into the INTP and what is really going on inside of them. People see that they are focused on facts and information, and just aren’t the most outwardly expressive people. Because of this they feel like the INTP is emotionless or robotic, and just doesn’t care to be close to other people, instead they prefer cold hard facts and information. Of course this is completely untrue, and only comes from a lack of really seeing deeper into the heart of the INTP.

INTPs also get pegged as socially awkward nerds, never capable of really being outgoing or charming. People imagine the INTP as someone who is constantly skulking in the shadows with their computers and books. This stereotype and complete myth, pigeonholes the INTP into being completely against social interaction and almost incapable of it. It accuses them of being people who cannot function normally around others and are likely to be extremely awkward in social situations, especially when they are around a lot of people.

INTPs are often said to struggle with commitment and have a desire to bounce around constantly. The stereotype suggests that they cannot settle down in one place or stick by a choice, because they are constantly wanting something else. It makes the INTP seem incapable of committing to a relationship or a career, saying that they are always changing their minds and moving in a different direction. This makes the INTP seem very flighty and unreliable. It is also tied into the stereotype that INTPs are lazy people, who are incapable of finishing things or really keeping up with anything important.

INTPs aren’t cold or uncaring people, they just have so much going on inside of their own minds. This is likely the most common and most inaccurate stereotype connected to them. INTPs are often deeply caring people, especially when they let someone in and truly develop feelings for them on a deeper level. When the INTP cares for someone it can take up a lot of their thoughts, wanting to find ways to make this person better and make them happy. They invest a lot into the people who are close to them, and do what they can to help those people. INTPs just don’t find it easy to openly express their affection all of the time, but that doesn’t mean it is impossible. They often try to work on this part of themselves, and can even be romantic with someone they truly trust. INTPs are caring people, much more than people realize and they feel things very deeply. The INTP just isn’t naturally good at being expressive about these feelings, but to call them cold and robotic is one of the most untrue things one could accuse the INTP of.

INTPs are also stereotyped as socially awkward, but that is not something connected to their personality type at all. Sure, some INTPs might be socially awkward or anxious people but this isn’t connected to their type. There are plenty of INTPs who actually know how to be outgoing and even comedic around others. They have great senses of humor and often use this to connect with people in social situations. INTPs can actually be very outgoing people, even though they become drained by too much interaction. Just because INTPs enjoy time to themselves does not make them incapable of interacting with others and being social. Sometimes they even enjoy showing off a bit and being someone who can entertain others, they just become drained and need to be alone afterwards.

Saying that INTPs are incapable of commitment is entirely untrue and really harmful to their character. To say they cannot commit or stand by their word makes it sound like they are bad people who just don’t care about those around them. Not only is this harmful but it is grossly untrue, since INTPs do stand by important commitments. They care about upholding their word, INTPs just don’t want to commit to something until they are sure about it. Once they know they can really commit to a person or a choice, they will be capable of standing by this. INTPs are curious people who want to learn about the world and enjoy new things, but that doesn’t make them unstable or flighty people. The more the INTP matures the more they want to seek out things to ground them, they just need a sense of freedom at the same time.

Why The Stereotypes Are Harmful

These stereotypes make the INTP seem like cold and uncaring people, and this is entirely false. It is always important to take a deep look and work to truly understand what is going on inside of a person. People might write off the INTP as someone who is distant and incapable of connection, when in truth they crave finding someone who understands and appreciates them. INTPs can also be extremely caring and giving people, especially towards someone they love. To claim they are cold is definitely not true to who they are, and this is why digging deeper is important.

This can often cause people to keep their distance from the INTP and never truly give them a chance. When in reality they can be some of the most understanding people, who will go out of their way for those they care about. This is why stereotypes can be so harmful, both to the personality type being misunderstood and to the people trying to get to know them. These misconceptions need to be completely abandoned in order to give people a chance to really show their true colors.