INTJ Myths, Stereotypes & Misconceptions: Cliches and Tropes That Are Inaccurate 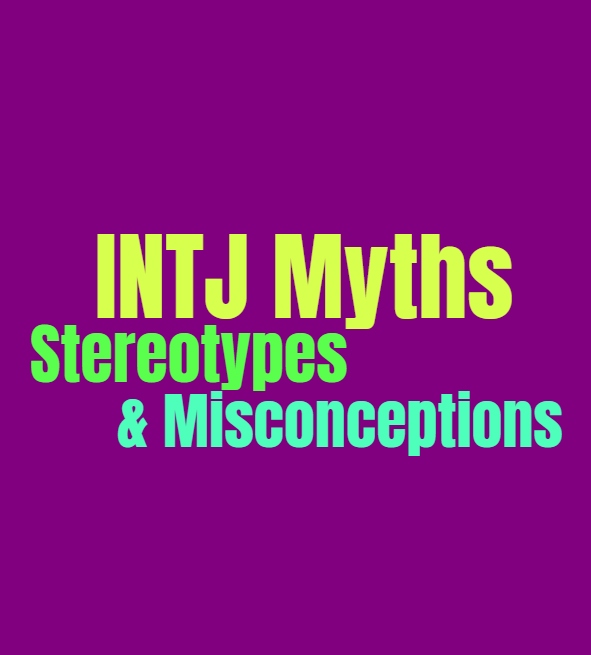 INTJ Myths, Stereotypes & Misconceptions: Cliches and Tropes That Are Inaccurate

INTJs are certainly labelled with many stereotypes and misconceptions which have nothing to do with their type. This often comes from a lack of accurate information, and simply making assumptions based on what they see on the surface. INTJs are complex people with many layers, as well as the fact that each individual is different. Personality types are not meant to describe an entire group of people and lump them all in together. The intent is to understand how people collect information and how they naturally respond to the world around them. This does not describe everything about a person, which is why digging deeper is necessary when it comes to really understanding someone on a personal level.

One of the biggest stereotypes for the INTJ is that they are emotionless or unfeeling people. There is this belief that INTJs are robotic people who just don’t have emotions or feel things the same way the rest of the world does. This almost labels them as sociopaths, or dangerous people who cannot be trusted. These harmful stereotypes claim that the INTJ does not care about other people or making choices based on morals. This is often because the INTJ does care very much about facts and logic and wants to make choices without allowing emotions to cloud their judgment. They are often very direct and to the point when expressing things, and so they don’t seem overly affectionate or bubbly most of the time. When the INTJ is focused on something important they don’t want to be over the top, they just want to be sure they are getting things done the most efficient way possible. These behaviors have caused them to be labelled as emotionless, when this could not be further from the truth.

Also connected to the previous stereotype, there is a misconception that INTJs are not good in romantic relationships. This idea makes people believe that the INTJ is to be avoided because they cannot provide a partner with what they might need or want. This make most people the INTJ is distant and cold when it comes to romance. This is because INTJs do focus on work often times and need time alone, and so people label them as a bad choice for a romantic partner. While this might appear like the truth on the surface, most people who have taken a chance and gotten to know the way the INTJ is in a relationship will know that this is actually very inaccurate.

There is also a misconception that INTJs are not fun people, only focused on facts and getting things done. They are workaholics who cannot take the time to let loose and have a good time. This stereotypes makes the INTJ continue to seem robotic and only focused on their practical and logical methods. While this idea comes from people who really do not know the INTJ, that doesn’t make it spread with any less harmful. This stereotype causes people to view the INTJ as cold and even boring people, only driven by their desire for power and to complete their goals in life. Of course, the people who are close to the INTJ often know just how untrue this actually is.

While INTJs are certainly logical people they are not at all emotionless. This is one of the more absurd stereotypes tied to the INTJ and can be rather harmful for them. INTJs are not emotionless at all, in fact they feel things just as deeply as anyone else. They have complex inner emotions and are actually very moral people. While they care about facts and logic, they still care about their loved ones immensely. For the INTJ doing things right and being upfront with people, is a way of showing how much they care. This sense of morals they possess makes them more honest people who believe in striving to make the world better by spreading the truth. For the INTJ removing ignorance is a goal which comes from a place of caring and wanting to actually make a difference. When it comes to the people the INTJ cares for, they will often go out of their way for them and are fiercely loyal individuals.

While INTJs might not be the most bubbly or outwardly expressive people, that does not make them bad in romantic relationships. INTJs who have committed to someone are actually very loyal and giving people. Once they let someone into their lives and their hearts in this way, it is not something the INTJ takes lightly. They can actually have a rather romantic side as well, it just takes time for them to feel comfortable exposing this part of themselves. When the INTJ does find themselves becoming more romantic with someone, it is very meaningful for them and their partner. This stereotype is so wildly inaccurate, but comes from people making surface judgements before actually getting to know the INTJ.

The idea of INTJs are not fun is also very untrue, since INTJs have great senses of humor. Their hurmo can often be more sarcastic and even dark at times, but they enjoy making jokes and spending time with their loved ones. INTJs are great at having fun and even relaxing when the work day is over. They simply enjoy being someone who can focus on their tasks and take things seriously when the time comes to do so. When they are spending time just enjoying themselves the INTJ knows how to have a great time and can actually be very outgoing and social. INTJs aren’t anti-social people, this is an unfair and highly inaccurate stereotype. INTJs enjoy having a good time and can be more fun than most types since they aren’t afraid of what others might think.

Why The Stereotypes Are Harmful

These stereotypes cause people to judge the INTJ as someone who is cold and uncaring. These ideas can cause people to avoid the INTJ or feel afraid to be around them or trust them. This is extremely harmful, especially to people who are misjudging the potential in the INTJ. They are capable of being very caring people, and they are not selfish like some people might believe. Just because the INTJ has boundaries and doesn’t allow people to push them around, does not make them self-centered. INTJs actually enjoy helping others and want to do what they can to remove ignorance. For the INTJ this is meaningful, since they see ignorance as something which is very damaging and harmful to people.

INTJs are nothing like the stereotypes placed on them, especially when given the chance to see more of their complex personality. It is important to abandon these preconceived notions and get to know people on a deeper level. While personality types can be a great way of learning how to communicate with someone better, it should not be used to judge someone as good or bad.