ENFP Myths, Stereotypes & Misconceptions: Cliches and Tropes That Are Inaccurate 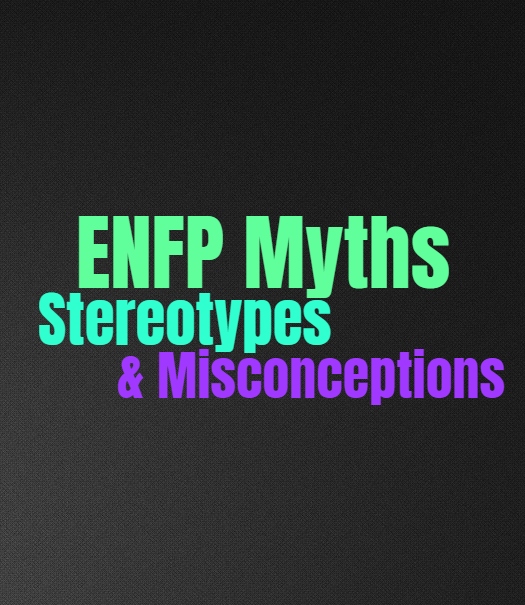 ENFP Myths, Stereotypes & Misconceptions: Cliches and Tropes That Are Inaccurate

Stereotypes are never much of a good thing, even the positive ones can be harmful in some ways. It is important to remember that stereotypes are rarely true, and almost always goes against the real behaviors of an individual. These stereotypes should be completely rejected if you truly want to get to know someone on a real and intimate level. Simply believing in these misconceptions can really cause you to see someone inaccurately, and potentially miss out on what they have to offer. ENFPs have many stereotypes and misconceptions attached to them, ones which don’t necessarily come from who they truly are.

The ENFP has many stereotypes attached to them, one of the worst ones is that they are incapable of commitment. Because the ENFP is so naturally curious and enjoys exploring different options, people believe that they are incapable of committing to something or to someone. This makes it seem like the ENFP is overly flirty and might even struggle to remain faithful to someone. This causes people to feel like they cannot enter into a romantic relationship with an ENFP, since they naturally believe that they are incapable of remaining faithful or fully committed to the relationship. Not only does this harm the reputation of the ENFP, but it is founded on complete myth. Sure, ENFPs do enjoy exploring different things but that does not instantly make them unfaithful people. This stereotype is one of the most obvious ones which most people hear about the ENFP, causing them to believe that all ENFPs are unfaithful and have a wandering eye when it comes to romance.

There is also a stereotype or misconception that the ENFP is constantly bubbly and peppy. This makes it seem like the rainbow is just filled with sunshine and rainbows every moment of the day. Making them seem like some sort of mythical creature who is never negative or in a bad mood. This makes people put that type of pressure on ENFPs, believe they should always be happy and fun to be around. This also causes some people to turn to the ENFP when they want someone to pick them up and just overall make their mood better. This can be exhausting for the ENFP, since they really don’t find it natural to have to tend to the emotions of others.

Many people believe that ENFPs are constantly expressive and highly emotional people. They see them as constantly spewing their feelings all over everyone, without the ability to really restrain themselves. The ENFP is depicted as someone who is constantly emotional and so deeply in touch with their feelings that they are constantly needing to express them. This makes the ENFP seem a bit all over the place, and like they are a blubbering mess most of the time. This might be one of the more offensive stereotypes attached to the ENFP, even more so because it is highly untrue.

The truth about the ENFP is that they are not incapable of commitment or of remaining faithful to someone. This is founded on the fact that ENFPs are naturally curious people, they do enjoy exploring different things. They want to be open to options and want to be capable of experiencing a myriad of different paths and choices in life. While the ENFP does enjoy exploration, this does not instantly make them incapable of remaining faithful. When the ENFP does care about someone and wants to share something special, they are very capable of remaining faithful. For the ENFP it is about the individual and if there is something real and meaningful in that connection. When they make that choice to commit to someone, the ENFP is very capable of remaining loyal to them. They are often very honest and sincere people, and so when they really care to commit then they are certainly capable of doing so. This depends on the specific person, and not just their personality type. But in truth many ENFPs value commitment and care about remaining true to their word, since they are highly moral people. If the ENFP is “unfaithful” to someone it is often because they have made it clear they aren’t committed to what they have.

The stereotype that the ENFP is constantly bubbly and happy is one of the most untrue things out there. While ENFPs do enjoy trying to remain positive and they dislike being constantly negative about things, that doesn’t make them always bubbly people. ENFPs even enjoy sarcasm and darker humor sometimes, more than most people realize about them. While ENFPs don’t like discord or tension in their environment, that doesn’t mean they are constantly bouncing around being bubbly and sunshiny. They get in grumpy moods just like everyone else, and even enjoy being a bit dark at times.

The misconception that the ENFP is constantly open about their emotions is actually highly inaccurate and often what causes people to mistype them. ENFPs aren’t always comfortable being open about their feelings, especially if they have been hurt in the past. ENFPs are naturally very honest people who feel things very deeply and powerful, but that doesn’t instantly make them someone who wants to spew their feelings all over the place. There are times when the ENFP does feel the need to openly express themselves and their feelings, since they believe in being honest and sincere. This doesn’t happen all of the time, and isn’t always a representation of how the ENFP behaves on a regular basis. While emotions are very important to the ENFP, it doesn’t mean they are someone who just constantly needs to unload their feelings onto everyone around them.

The stereotypes for the ENFP are definitely harmful, both to the ENFP and the people who meet them. This often causes people to have expectations from the ENFP which aren’t necessarily true to who they are. While some of these stereotypes might ring true for the occasional ENFP, it isn’t something which is constant and for most they aren’t true at all. It is important to get to know the individual and who they are inside, not just judge them based on their personality type. These types are meant to help us learn how to communicate with someone better, not cause us to write them off simply because of their worst stereotypes.

ENFPs are not overly emotional people, and they certainly are not incapable of commitment. Some ENFPs are actually wonderful in relationships and enjoy remaining loyal to their partner. This entirely depends on the person and what their goals are, and so judging them based on these misconceptions would be harmful to the ENFP. This could also cause people to miss out on being close to an ENFP, since these can be truly valuable connections to have.