ENFJ Myths, Stereotypes & Misconceptions: Cliches and Tropes That Are Inaccurate 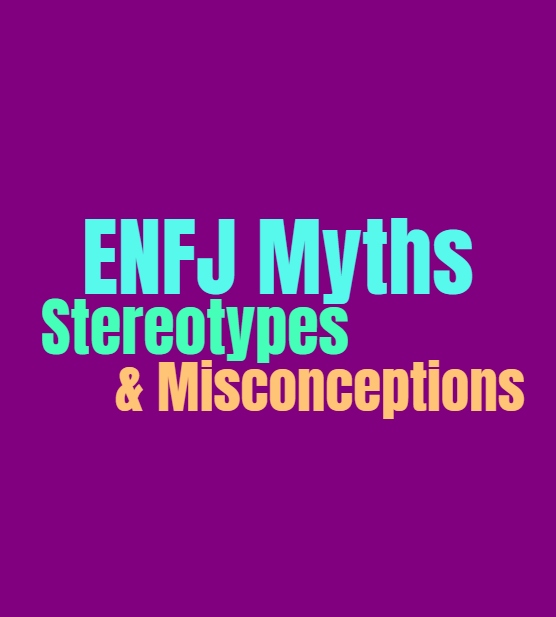 ENFJ Myths, Stereotypes & Misconceptions: Cliches and Tropes That Are Inaccurate

Every personality type gets marked with various stereotypes and misconceptions, which really aren’t true to them or their type. These little myths often come from people only seeing what is on the surface and not truly understanding where these people are coming from. It is a complete lack of real information and is solely based on momentary perceptions,. This is why digging deeper is important if you want to truly understand someone better, especially when it comes to understanding each personality type and what their behavior truly comes from. Stereotypes are rarely ever accurate or useful, and often come from ignorance and preconceived ideas about someone.

One of the more common ENFJ stereotypes is that they are illogical people who only base their choices of off emotions. This stereotype makes the ENFJ seem incapable of thinking logically about things, as if they cannot see reason. It makes them appear much less practical, and instead only focused on feelings and inner emotions. It stems from the fact that their dominant function is Fe (extraverted feeling) which focuses on the emotions of others and tending to their needs. This causes people to see the ENFJ as incapable of having these in depth and logical conversations. It pegs the ENFJ as someone who can’t really focus on these types of complex theories or ideas, because logic just isn’t that important to them.

ENFJs are also stereotyped as being constantly bubbly and social, and almost over the top flirty. It makes them appear like they never want to be alone and really just want to surround themselves with people. The stereotype accuses the ENFJ of being someone who has a full social calendar and wants to maintain this sense of popularity. As if the ENFJ does not want to be by themselves and really just enjoys constantly being bubbly and interacting with others. This comes from the fact that ENFJs are friendly people, who naturally care about others and want to help them. They do care about creating a sense of community and connection with their loved ones and are fairly good at being the social butterfly when they want to be.

Because they are such social people who enjoy interacting with others, they are often pegged as gossips. The stereotype is that ENFJs will struggle to control what they say and have a tendency to gossip behind someone’s back. When they get around other people they turn into someone who wants to just chat about anyone, even if this turns into harmful and upsetting gossip, making the ENFJ out to be someone who is untrustworthy because they can’t seem to keep quiet.

There is also a stereotype that the ENFJ is constantly optimistic, and ready to take on any problem. While ENFJs are fighters who push through struggles and believe in working hard, that does not make them constant optimists. The stereotype pegs them as someone who is always going to see the bright side and never feel like things are overwhelming or too difficult to handle. It makes them seem overly optimistic to a point where they don’t ever see the bad side of things and want to just remain positive and always looking towards the future.

ENFJs are not constantly focused on emotions to such a degree that they cannot see logic or reason. ENFJs actually enjoy doing research and want to be someone who understands more complex ideas and information. ENFJs don’t just sit around focused on emotions constantly, never seeing the logical side of things. When the ENFJ goes against the more logical option this isn’t because they are ignorant to it, it is because they have chosen to focus more on doing what they feel is morally right and good. They care about others and want to make people happy, and sometimes this just becomes their priority in a given situation. While this might be their main focus and goal, that doesn’t make the ENFJ illogical or incapable of seeing reason. It is often quite the opposite since ENFJs have wildly active inner minds and enjoy learning and growing.

The idea that ENFJs are constantly social butterflies is extremely untrue. While ENFJs are naturally outgoing people who enjoy being friendly, this isn’t a constant for them. Being that they are so in touch with the emotions of others, ENFJs can actually became drained after a while. While they enjoy the presence of other people, they also enjoy their time alone just as much. For the ENFJ it is important to have some time to themselves or else they start to lose sight of who they are and what their own needs actually are.

The stereotype that ENFJs are gossips is a complicated one, but not entirely true. For the ENFJ negatively gossiping about someone is not something they are often okay with. They become upset at the idea of hurting people and so gossiping is something which they can see as immature and harmful. If the ENFJ is simply discussing someone they care for that is different, since they are naturally interested in people and enjoy knowing more about them. Chatting about a loved ones is not gossiping for the ENFJ, at least not until the conversation starts to become negative and cruel. In this case the ENFJ isn’t a fan of gossiping behaviors and often becomes upset by them.

The stereotype that ENFJs are perpetual optimists is not entirely true, but it isn’t completely false either. ENFJs are more likely to hope for the best but prepare themselves for the worst. They can sometimes even be a bit cynical about certain things, especially when they are feeling weighed down by the constant pressure of their lives. ENFJs are perfectionists and will continue to push hard to overcome struggles, this is what makes people believe they are optimists. ENFJs also care about making others happy and so there are times when they will put on a smile even when they are feeling a bit defeated inside.

Why The Misconceptions Are Harmful

Stereotypes and misconceptions are often rather harmful, since it leaves people getting incorrect ideas about a person and their character. Many of the stereotypes for the ENFJ cause them to appear emotional and overly bubbly people. They can appear overbearing and even a bit gossipy, which is certainly not a positive perception for people to have about them. This causes others to want to avoid certain personality types because they don’t really get an accurate idea of who they are. These stereotypes can also be upsetting for the ENFJ, causing them to feel this sense of negativity when it comes to personality types and their own personalities.

These types of stereotypes are harmful and almost always entirely inaccurate. It is best to get to know someone on a deeper level and to completely abandon these misconceptions which cause us to think ill of others. While personality types are useful tools in understanding people better, they don’t describe every detail of a person and what makes them who they are. These things take time and understanding, and they certainly don’t take relying on some sort of stereotype we read about online.