Here’s How You Would Handle a Career in Law Enforcement, Based on Your Personality Type 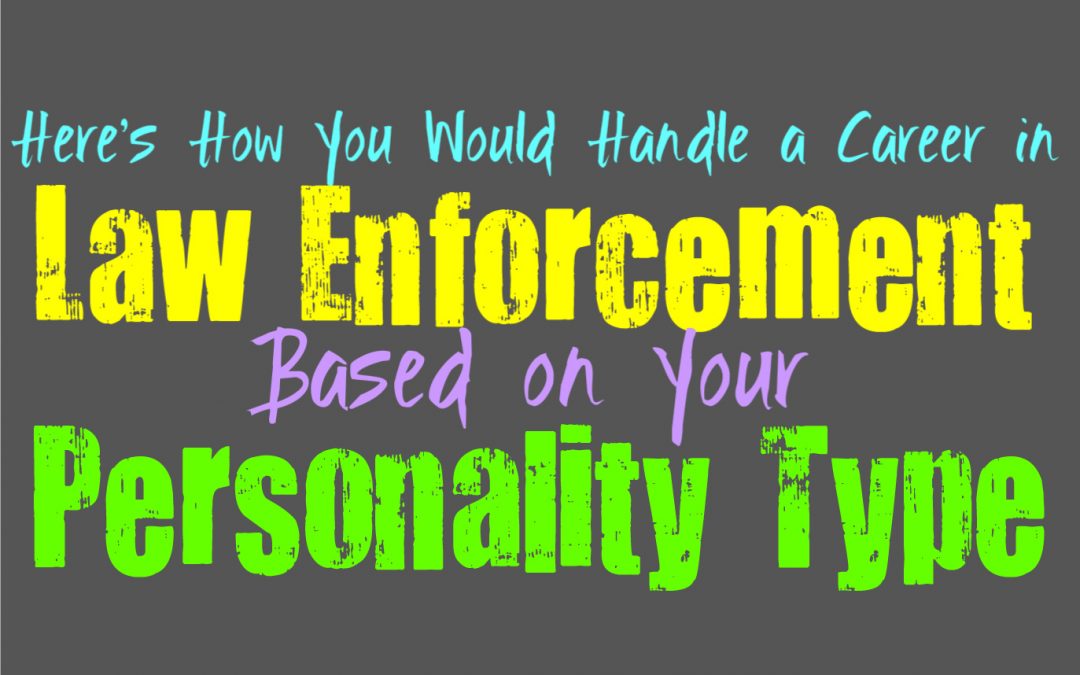 Here’s How You Would Handle a Career in Law Enforcement, Based on Your Personality Type

INFJs might struggle with the idea of a law enforcement career, since it requires reprimanding people. At the same time they value the intent of protecting people and in some ways carrying out a sense of justice. The struggle INFJs will have is having to reprimand people for breaking laws that they aren’t entirely opposed to. They often have their own idea of right and wrong, and having to constantly follow the rules and force others to do so, can be hard when the INFJ personally does not agree. This is likely the biggest struggle for them, and might make it hard for them to uphold a career in law enforcement.

For the ENFJ there are definitely pros and cons to working in a career in law enforcement. For them taking charge of a situation and working hard to protect others, is likely to be the highlight of the job. They enjoy being around others and can communicate with people rather easily, their sense of empathy is also something that would help them reason with civilians. For ENFJs the struggle would often be having to reprimand people when they have done something wrong, especially if the ENFJ has a hard time following this law themselves. They can disagree with how things are run, and so sometimes this type of career poses a struggle for them in that aspect.

For the INFP a career in law enforcement can be a bit overwhelming for them, and might feel like they are becoming too much of an authoritarian. They can become frustrated with the idea of having to uphold laws that they don’t personally believe in, and having to force others to follow them. This can be difficult for the INFPs most of the time, and they might feel like it goes against who they are. While they likely respect law enforcement and the job they do, having to be the one carrying this work out can be a bit against their personal beliefs.

ENFPs might idealize the thought of working in law enforcement, especially since they enjoy the idea of protecting and serving the people. They are highly moral people, but they have their own beliefs on what is right and wrong. ENFPs have some qualities, such as bravery and charisma, which would make them excellent in a law enforcement career. Their struggle would be with having to uphold laws they don’t believe in, but they do value being able to help people and be someone that others look up to in this way.

INTJs are not afraid of taking charge of a situation, and they are certainly capable of reprimanding people when needed. They aren’t afraid of stepping into a challenging situation and doing whatever it takes to make things right. INTJs are planner and they are often great at enforcing the rules, which would be a great asset to them in a law enforcement career. They are also good at memorizing information and will spend plenty of time progressing and honing in their skills in any career. Law enforcement does pose challenges, but for an INTJ that can sometimes be a plus.

ENTJs are often great at taking charge and enforcing rules, which will certainly help them in a law enforcement career. They often know how to manage a difficult situation and will work towards making sure everything goes the way they plan. ENTJs are good at upholding the laws and can often find ways to pushing people to do the same. They can be a bit intimidating, but their sense of control and confidence is something that helps them in this type of career. ENTJs are also people who value efficiency and so they will do whatever it takes to excel at their job.

INTPs aren’t often the type to be drawn to a law enforcement career, since they don’t like having to reprimand others. Having to be the person to enforce laws- some of which they don’t believe in- just isn’t ideal for the INTP.  They don’t like having to play the role of someone who takes charge and demands that others listen to them, and so this type of career might feel insincere to who they are. While INTPs believe in doing what is right, the idea of being in law enforcement might pose a challenge for them.

For the ENTP a career in law enforcement might sound appealing, at least at first. They might be drawn to the sense of pride they would feel and the thought of doing something that truly makes a difference in the world. ENTPs often imagine themselves in many different careers and lifestyles, even the ones that may not be ideal for them. ENTPs aren’t always the best at following rules, and would struggle with the thought of upholding laws they don’t personally believe in. Their rebellious nature might make certain aspects of the job a bit challenging, but at the same time their intuition and charm would be a great asset.

For the ISTJ a career in law enforcement can truly be a wonderful fit. They have a strong belief in upholding the law and doing what is right, and this helps them become someone who can carry this out. ISTJs are also great at maintaining a sense of control over situations and are highly efficient people. They often do things by the book, which certainly helps them in a law enforcement career. ISFJ will be able to remember the important regulations and protocols, and are great at making sure things are done properly.

ESTJs are often excellent in law enforcement careers, especially since they are such efficient people. They believe in following the rules, and will be great at carrying out and enforcing the laws of society. ESTJs aren’t afraid of taking charge and can be very assertive people, which certainly helps them in this career. They know how to control a situation and will work hard to make sure things don’t get out of hand. ESTJs can memorize and understand the protocols and rules that they need to follow, and will often take pride in them.

ESFJs can certainly be great at a career in law enforcement, especially since they are compassionate people. They value efficiency and often have a somewhat rule following nature. They understand that certain laws are truly important and will do whatever it takes to uphold them. ESFJs also take pride in their work and will do their best to ensure that they excel at their job. Their sense of compassion can help the ESFJ connect with people, so that they can better do their job and understand what is going on in any given situation.

ISTPs might enjoy some aspects of a law enforcement career, especially if they work in a more exciting field. They enjoy the idea of having new things to experience and would like not necessarily knowing how things are going to turn out. For the ISTP it is fulfilling to do something that gives them a chance to feel challenges and also like they are doing something of true value. While the idea of having to enforce laws can be challenging sometimes, ISTPs can also value these laws if they can logically understand the reasoning behind them.

ESTPs might enjoy certain aspects of a law enforcement career, especially if they work in a field that provides intensity and excitement. They enjoy experiencing new things and are best in a career that lets them feel challenged and dives into the unexpected. Where ESTPs might struggle is with having to actually enforce laws that they don’t believe in or feel like upholding themselves. At the same time ESTPs rebellious nature is not always one of an illegal sense, and so this career can still be truly rewarding for them.

ISFPs might not enjoy working in law enforcement, since they can have a hard time being the enforcer type. They don’t like having to reprimand people for making mistakes, especially if they don’t always agree with the laws that are in place. ISFPs have their own sense of morals, which are very personally to them. They don’t like going against what they believe in, and so sometimes law enforcement careers can make them feel hypocritical. While they understand the value and importance of this type of career, it isn’t always one they personally thrive in.

ESFPs are strong-willed and adventurous people, and will possess certain qualities which would be beneficial in a law enforcement career. Their greatest asset would be their sense of charisma and bravery. ESFPs are friendly people who can get along with just about anyone, which is something that can help them persuade others into doing what they tell them. At the same time ESFP are spontaneous people who don’t always like following rules themselves, so this can sometimes stand in their way.