Are You Someone Who Makes Enemies Easily, Based on Your Personality Type 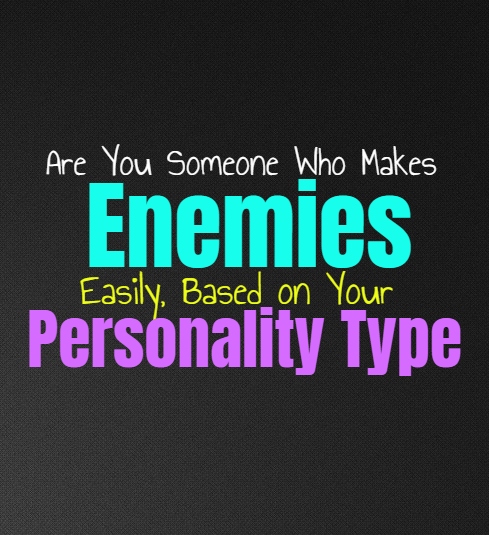 Are You Someone Who Makes Enemies Easily, Based on Your Personality Type

We all can make enemies simply because we are different than someone else. There are times when just being yourself can be too much for another person to handle and so they become confused by who you are. While this can happen to anyone, there are some people who have a tendency to make enemies just about anywhere they go. Here is how likely you are to make enemies, based on your personality type.

INFJs don’t really like making enemies and do keep to themselves most of the time. For them it easier to make connections with people who understand them and so they don’t open up until they find this. They can keep some of their unique opinions to themselves, avoiding shaking things up too much. INFJs do make enemies just like any person, but when they do this is because of something which means a lot to them, and INFJs really aren’t the type of people you want to make an enemy of. They certainly try to avoid this and most of the time they are capable of it, since they are good at keeping to the people who they truly love and care for.

ENFJs are outgoing and compassionate people, which does help them avoid making enemies most of the time. Their friendly nature helps the ENFJ to connect with and understand people. Most individuals who encounter the ENFJ see them as fun and caring people, and they rarely find themselves wanting to become their enemies. They do however, have larger than life personalities which can occasionally rub someone the wrong way. ENFJs aren’t afraid of being themselves and this can sometimes lead to them creating enemies but most of the time people don’t want to make enemies of the fierce ENFJ.

INFPs are kind and fun people, who really don’t make enemies easily. They keep to themselves most of the time and try to always be considerate of how they express themselves to others. They don’t want to cause pain, and because of this they can often avoid any drama or creating enemies where they don’t want to. On the flipside of this, INFPs will stand up for the things they believe in and can become rather fierce in defense of these beliefs and their loved ones. When this happens the INFP can certainly make enemies of those who disagree with them.

ENFPs are lighthearted people who prefer to focus on positivity and having a good time. For them making enemies can actually be deeply upsetting, since they don’t really understand the reasoning most of the time. ENFPs try to focus on being friendly and kind, and so most of the time they can avoid making enemies. They are usually popular people who make friends wherever they go, instead of making enemies. They are unique people who will stand up for their beliefs though, and sometimes this can create unexpected enemies.

INTJs are strong-willed people who believe in spreading the truth instead of covering things up to protect people’s feelings. This is certainly something which can cause them to make enemies where they go in life, but this is something they are often prepared for. INTJs tell it like it is, rather than sugar coating things in order to make people feel better. This is something most people cannot handle and so they do sometimes create enemies in the process of spreading the truth wherever they can.

ENTJs are very strong-willed and often intense people, and because of this they can be prone to making enemies in life. When the ENTJ wants something they go after it, and they don’t believe in apologizing for this behavior. They focus on doing what feels right to them and work hard to make things happen. ENTJs also don’t believe in sugar coating the truth in order to make someone feel better, but sometimes the truth is hard for people to cope with. Their sense of focus and sometimes lack of tact, does cause the ENTJ to create enemies in life.

INTPs do try to keep to themselves most of the time, which can help them avoid making enemies in most situations. They keep a lot of their thoughts and feelings inside of them, not really feeling comfortable opening up to those around them. Sometimes their aloof personalities can cause people to misunderstand the INTP, and these misunderstandings sometimes lead to making enemies. They also believe in spreading the facts and they aren’t always good at doing this in a sensitive manner, which is something people might not respond to very well.

ENTPs are outgoing people who go after uncovering the truth and can sometimes be a bit larger than life. The way they go after what they want and live with a sense of intensity, can certainly cause them to create enemies wherever they might go. Not everyone can handle the way the ENTP enjoys debating and working to prove their points. They do this for the sake of learning and growing, but not everyone is capable of understanding their intentions. Because of this ENTPs certainly make enemies in life, but they also make plenty of sincere connections.

ISTJs tend to focus on their own lives and just want to build up something they can be proud of. For the ISTJ it is better not to make enemies or try to create discord which could cause them problems. Most of the time people see them as reliable and respectable people, since they can keep their inner feelings to themselves. They often save their more personal thoughts and feelings for the people they truly trust, so that they can avoid shaking things up or causing too many problems with people who won’t understand them.

ESTJs are sometimes aggressive people, especially when they are going after something they want. This can occasionally cause them to make enemies on their way to accomplishing their goals. When the ESTJ wants something they won’t let anyone stand in their way, and they can be rather stubborn in the process of this. Because of this ESTJs definitely make enemies in life, but they are often perfectly fine this with realization.

ISFJs don’t like the idea of making enemies and most of the time they can avoid this. They focus on being kind to others and want to be able to help people as often as they can. ISFJs want to be someone who others can turn to and really don’t like causing discord or trouble. Most of the time the ISFJ will go in favor of creating harmony in their environment, rather than shaking things up and creating enemies.

ESFJs rarely create enemies, mostly because they are people pleasers. They focus on tending to the needs of others and don’t want to do anything which might upset someone. ESFJs are often capable of avoiding making enemies, since they actively try to do this. For them it seems like a bad idea to create problems with people they encounter. They would rather create a sense of harmony in their lives and want to be able to make things easier for those around them.

ISTPs are often seen as mysterious people, keeping to themselves and not wanting to get mixed up with others most of the time. They do believe in spreading the truth but they can often do this in a way which doesn’t create enemies or problems along the way. They are often charming people and so when they try and make their point it rarely creates enemies, and even when it does they can find ways to mend this if they want to.

ESTPs are charming people who can often find ways of making amends if they do create enemies along the way. Most of the time they are good at making friends where they go and really don’t want to cause discord or problems. While they can be rather intense and even headstrong people, most of the time their sense of charisma helps them to get out of sticky situations and win people over.

ISFPs really aren’t likely to make enemies in life, since they try to focus on being positive and creating friendships instead. ISFPs don’t like spreading negativity and can actually become rather upset if they create too many enemies in life. They focus on being around people who understand and appreciate them for who they are, and so this does help the ISFP avoid making enemies most of the time.

ESFPs are friendly and outgoing people who really don’t want to make enemies in their lives. For them it is better to make connections and friendships, and to avoid making enemies. ESFPs are very focused on finding joy and living in the present moment, rather than getting hung up on the bad things in life. Most of the time they can avoid making enemies, and will use their charm to get out of any sticky situations.