Here’s How Self-Deprecating Each Personality Type Can Be 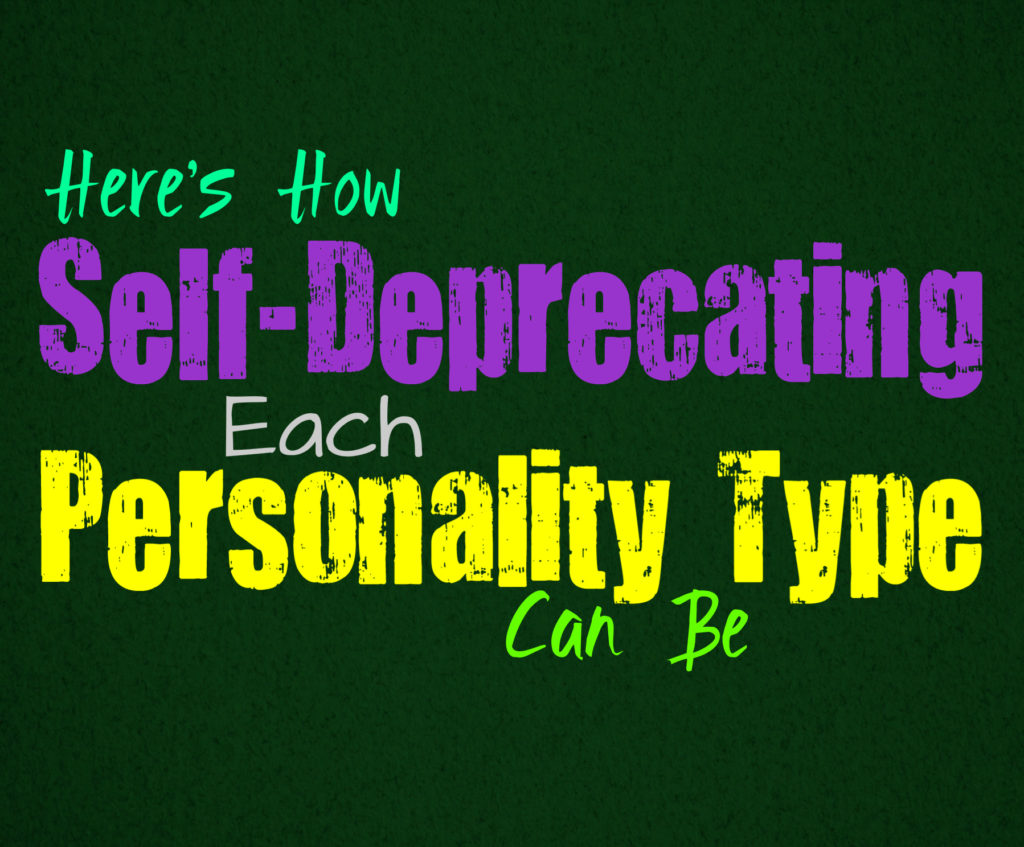 Here’s How Self-Deprecating Each Personality Type Can Be

INFJs are warm and giving people, but they can be rather hard on themselves. They have moments where they want to express themselves in a serious way, but they know how to take a step back. INFJs are often very self-deprecating, and enjoy not always taking themselves too seriously. They have a good sense of humor, and will make fun of themselves in order to lighten the mood. Sometimes INFJs can use this self-deprecation as a way to express their insecurities without people taking to too seriously. They do have moments where they are far too hard on themselves, and need their loved ones to step in and show them how great they truly are.

ENFJs are very supportive of their loved ones, which becomes their main focus in life. Although ENFJs are more attentive to the needs of others, they do have moments of being self-deprecating. They enjoy making people smile, and want to be liked by those closest to them. If the ENFJ can make a few jokes at their own expense, they certainly don’t mind doing this. They don’t take themselves so seriously that they are incapable of being playful, and actually enjoy making others smile. They poke fun at themselves simply for the sake of humor and expressing that they are a truly down to earth person.

INFPs keep to themselves most of the time, but are completely different people when they trust someone. When they are comfortable with someone the INFP comes out of their shell and expresses their true selves. They are actually very funny people, with incredible senses of humor. INFPs utilize their very unique sense of humor, which includes self-deprecating comments. They have somewhat dark humor, and enjoy being able to poke fun at themselves. INFPs don’t usually do this because they are insecure, but simply because it is funny and shows they don’t take themselves too seriously.

ENFPs are enthusiastic people, and in most cases they prefer to remain positive. They do have a great sense of humor though, and on occasion with be a bit self-deprecating. They don’t do this because they are sincerely insecure, but rather because it can make people laugh. ENFPs like taking advantage of the best possible joke in front of them, and enjoy being spontaneous about it. They don’t mind being self-deprecating, but they don’t do it constantly.

INTJs are intelligent people, who focus on research and understanding. They like to be on their own most of the time, and are very independent people. They prefer to express their confidence when they are around others, and don’t really like to be self-deprecating. Behaving this way is something INTJs prefer to save for the people they trust, since they realize that others might misunderstand it. They know that some people will assume they actually have those insecurities, so they would rather not present themselves that way. When the INTJ is around their loved ones though, they do have moments of being self-deprecating for the sake of humor.

ENTJs are hardworking people, with a strong sense of independence. They present themselves in a rather confident way, and don’t want people to think they are weak. Sometimes being self-deprecating can be taken the wrong way, and cause people to assume the person is insecure. ENTJs realize that sometimes people can misunderstand this, so they often avoid presenting themselves in such a way. The ENTJ will likely only be self-deprecating when they are with their loved ones, but even then it is rare. They prefer not to put themselves down, and want to remain somewhat positive and forward thinking.

INTPs are very independent and somewhat introverted people, but they actually have excellent senses of humor. They enjoy being able to make people laugh and like to craft a creative punchline. INTPs are witty people, and often utilize self-deprecating humor as a means of making people laugh. They don’t do this because they are insecure, they simply enjoy being able to make the best possible joke in the moment. They do want people to realize that they don’t always take themselves overly serious, and actually know how to kick back and relax a bit. It can be frustrating for INTPs sometimes when people don’t appreciate their humor, but it’s not uncommon.

ENTPs are outgoing and fun people, who really enjoy being self-deprecating. They often do it for the sake of humor, and enjoy being able to explore different sides of themselves. ENTPs don’t let anything hold them back, and are rather open-minded. Making a joke at their own expense is something that comes naturally for ENTPs, and sincerely doesn’t come from a place of insecurity. When the ENTP is self-deprecating it is often because they are confident and comfortable with themselves. They might have moments of exposing their weaknesses with self-deprecating humor, but will likely only do this with their loved ones.

ISTJs are hardworking people, who prefer to focus on getting things done. When it comes to the workplace ISTJs prefer to present themselves with poise and confidence. They don’t want to be foolish or misunderstood when they are working, and would prefer to impress their coworkers and bosses. When they are with people they trust, ISTJs become much different. They are comfortable letting their sense of humor show, and can be a tad self-deprecating. They have more of a sarcastic and dry sense of humor, which includes a few jokes at their own expense.

ESTJs are proud and hardworking people, who prefer to get things done. They favor efficiency and believe in doing their absolute best at everything. ESTJs don’t want to show any sign of weakness, and prefer to appear strong and put together. They do have great senses of humor, but ultimately don’t want to do anything that expresses themselves in the wrong way. ESTJs don’t usually act self-deprecating in front of others, and prefer to show confidence and strength.

ISFJs are often reserved people, who prefer to present themselves with a sense of poise. They want to be viewed a certain way by others, and dislike being misunderstood. ISFJs often do not enjoy any kind of humor that insults others or themselves, and like to keep things much lighter. They don’t like seeing anyone in pain, which makes certain types of comedy rather obnoxious to them. ISFJs are caring people, with loving hearts who simply want to care for the needs of others. They generally aren’t self-deprecating people, since it feels a bit foolish.

ESFJs are compassionate and loving people, who prefer to focus on the needs of their loved ones. They don’t want to do or say anything that upsets others, and can become upset when they see people in pain. Certain types of humor can go too far for them, since they prefer to avoid hurting people. They do have moments of being self-deprecating when they are around people they trust, but usually only do this in a funny way. Sometimes ESFJs do use it as a way to expose their vulnerabilities, in hopes of having someone combat them.

ISTPs are laid back people, who enjoy seeking out new adventures. They don’t mind being self-deprecating, but this does not come from an insecurity. They enjoy having their own space most of the time, and keep to themselves when they can. ISTPs don’t feel afraid to be self-deprecating, because in most cases they don’t really care what people think of them. If the ISTP decides to make a choice, it is solely for themselves and not for the sake of someone else.

ESTPs are outgoing and social people, who enjoy being liked by others. They do exude a certain sense of confidence, and enjoy having people look up to them. ESTPs will be capable of utilizing self-deprecating humor, especially if it gets a good laugh. They don’t mind making a little fun of themselves, and do this more when they are around loved ones. If they ESTP feels like they can trust someone to understand their jokes, they will certainly be a bit self-deprecating.

ISFPs are independent and caring people, who have rather strong morals. They don’t mind being a bit self-deprecating, but usually it bothers them. ISFPs prefer to be sincere and upfront, and don’t like pretending for the sake of humor. ISFPs also dislike making a joke out of their own weaknesses or even the weaknesses of others. They prefer to express themselves in an honest way, and want to enjoy the present moment.

ESFPs are fun-loving people, who prefer to soak up the present moment. They want to make people smile, and love being the center of attention. ESFPs do have moments of being self-deprecating, but only for the sake of entertainment value. They enjoy making people laugh, and love being in the spotlight. They don’t want to embarrass themselves too much though, and enjoy expressing a certain level of confidence. When the ESFP is being self-deprecating, it is simply to be entertaining.