The Interesting Qualities of the Male ESFP Personality 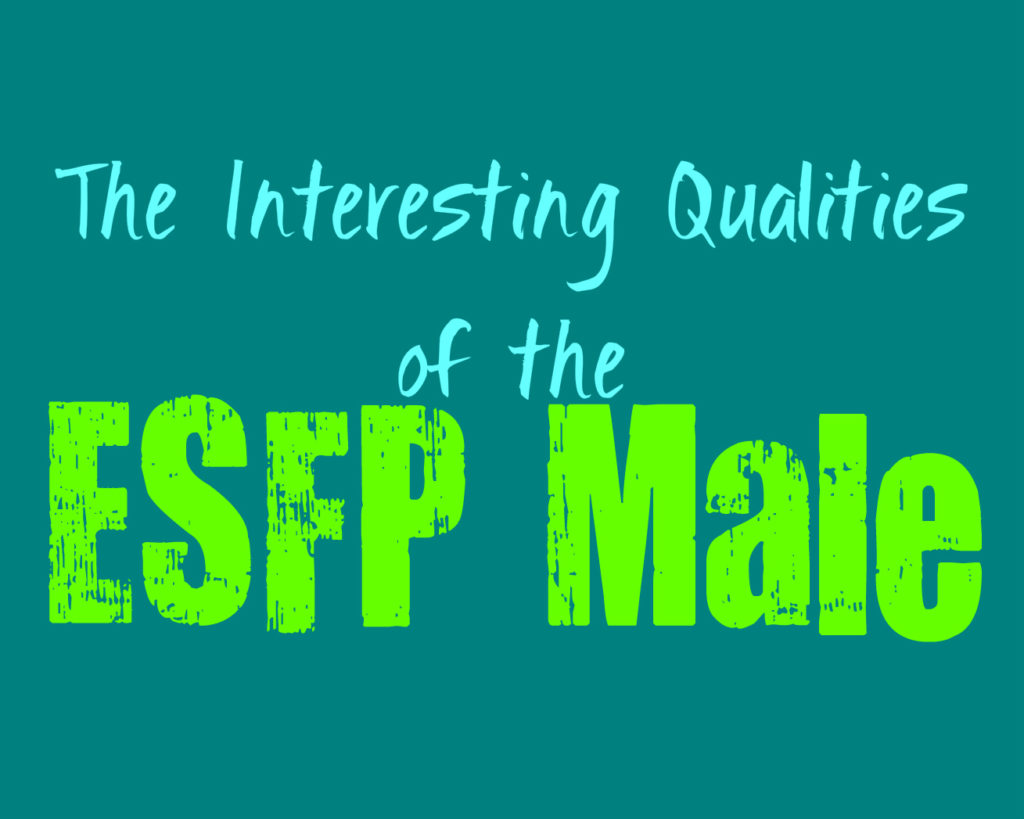 The Interesting Qualities of the Male ESFP Personality

The ESFP male is popular and lovable, with intriguing personality traits. They do have a few incorrect stereotypes tied to their personality, but they are truthfully caring and warm people. Here are a few interesting qualities of the ESFP male.

The ESFP male loves living in the present moment, and wants to have fun. They are spontaneous people, which can sometimes make them a tad reckless. They enjoy being able to feel free to do whatever they please, and do what feels right in the moment. The fact that the ESFP reacts to their whims, can get them into trouble when they are younger. Before they have learned a certain amount of self-control, the ESFP likely jumps from one things to the next rather quickly. They might wind up acting on their impulses in ways that get them or their loved ones hurt. This is something that likely makes the ESFP male rather popular when they are young, since people enjoy their outgoing and adventurous personalities.

They don’t intent to hurt or upset anyone, ESFPs simply enjoy being able to soak up the moment. They want to enjoy their lives instead of focusing on all of the negatives around them. ESFPs hate to feel dragged down, and they certainly don’t want their own sour mood to drag anyone else down with them. As they get older the ESFP male does better if they learn how to balance their spontaneity with responsibility, so they don’t become too reckless.

The ESFP male is actually very affectionate towards their loved ones. They are charming people, who are often aware of how to be romantic and impress their love interests. They have a knack for drawing people in, and keep them enticed with their charisma. They often enjoy being romantic with someone, and like being able to impress them. ESFPs do need a lot of attention in relationships, but they don’t mind giving it in return.

While the ESFP male can be quite the Romeo, they also are capable of being kind to people. They don’t enjoy seeing people in pain, and hope to bring a smile to their faces. The ESFP male is often friendly with everyone, even when it comes to meeting strangers. They are naturally social people and are comfortable approaching people. If they see someone in pain, the ESFP often wants to approach them and try to brighten their day. It is their goal to entertain others, and they will notice when someone isn’t having a good time.

They Do Crave Attention

It is true that the ESFP male craves attention, and enjoys being center stage. They love being able to keep people entertained, but this comes from a positive place. When they entertain people they are keeping the mood positive and happy. ESFPs love being able to keep everyone laughing and having a great time. They have a talent for bringing a group together and saving an otherwise dull mood. ESFPs are natural entertainers, who simply know how to draw the attention in their direction.

While the ESFP male does have a tendency to showboat a bit, people enjoy their playful personalities. The ESFP male is often popular and liked by others, and have a large group of friends. They also enjoy being friends with everyone, and hate when someone doesn’t really like them. ESFPs also love to receive attention from the people they care about, and often crave their attention the most. They can certainly be a handful, especially when it comes to relationships.

They Aren’t Incapable of Commitment

ESFPs have a tendency to jump from one thing to the next rather quickly, and this can sometimes include relationships. They simply enjoy being able to explore new things and don’t want to be stuck in one place. ESFPs live by their emotions and whatever feels right in the moment, which can sometimes lead them down difficult paths. They aren’t always in a situation where they are ready to settle down, which makes the ESFP appear incapable of commitment. This is an untrue stereotype, which is unfair for the ESFP. They are definitely capable of settling down, they simply should not try to do this before they are ready. The ESFP needs someone who can keep them stimulated, and who doesn’t try to control them. They only commit when they know they have found someone who can keep up with them and who is the right fit. It is often best for ESFPs to settle down later in their lives, after they have learned and discovered what they truly want in life.

The ESFP male follows his heart, even when it doesn’t seem obvious to others. They do what feels right in the moment, and follow their emotions above logic. They want to do what feels good for them, and don’t want to feel judged by others because of it. They might not always want people to see how warm and sensitive their hearts are, but deep down they are living in a depth of meaningful emotions.

ESFP males simply want to experience life and live every moment to the fullest. They don’t want to feel disconnected from their loved ones, and enjoy drawing close to them. They have big hearts, and want to be able to share that with others. Their affectionate and passionate natures, make them wonderful companions. They certainly are a handful to have in your life, but well worth the effort. Being close to an ESFP male means having a life filled with excitement, fun and even a little romance.

Insights Into The ESFP Personality That You Should Know