Dealing with Disappointment as an INFJ 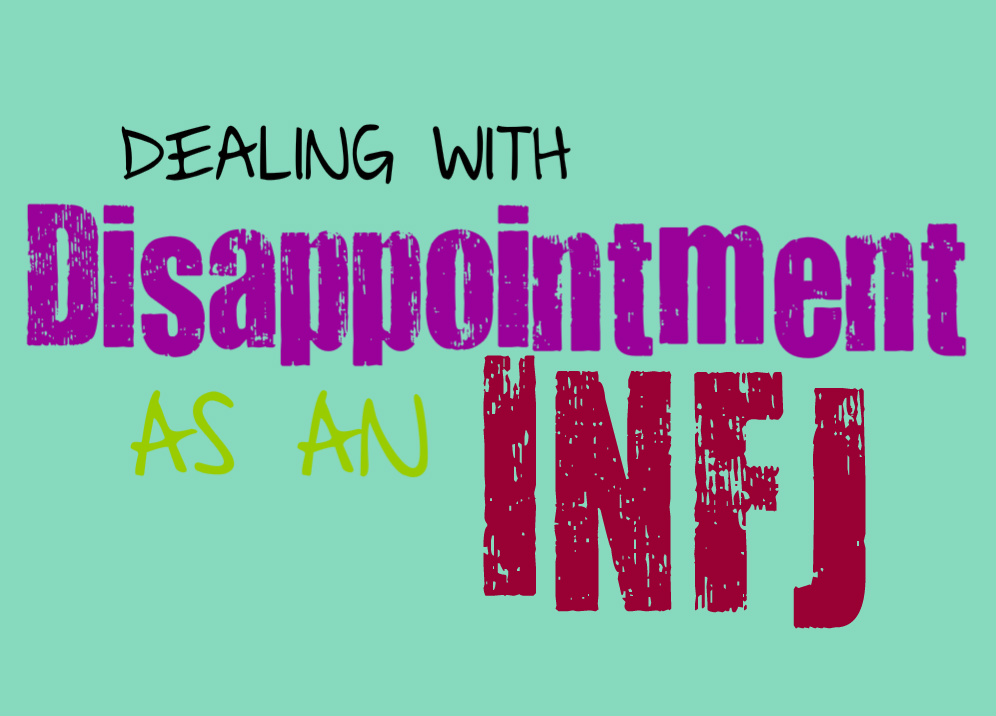 Dealing with Disappointment as an INFJ

The world is a dark and confusing place. There seems to be no truth, no justice, within it. Hope is a luxury we can ill afford in this age of widespread hatred and violence. What is to become of us? Where are we headed? What do we believe in, when the perceived best among us are revealed to be charlatans and liars? How do we come back from that, and can we even do so?

Last week, I was faced with a certain revelation about one of my favorite writer-directors in all of cinema. He was a man I had looked up to as a heroic figure, an inspirational icon, and a kindred spirit in some sense. A man whose self-effacing humor and awkward geekiness matched my own. Someone whose work effectively changed my entire outlook on life, and for that reason, I held him in high esteem.

After the accusations and revelations about him, I felt extremely dismayed and distressed. It felt like I was adrift, like I had no truth to latch on to, and like the rug had been pulled out from under me. And then came the existential questions, the dark ruminations, like the ones I mentioned at the beginning of this article. Maybe this was an overreaction, and I suppose a lot of the blame for this can be placed on me for putting someone like this man up on a pedestal. Still, I’m not a naive person, but I do tend to give others the benefit of the doubt, especially when I respect their character–or, at least, my perception of their character–or work.

So how does one cope with the feeling of disappointment when a friend disappoints you, or a hero falls from grace? I don’t have all the answers, of course, and this is an entirely subjective view from an average person, but I do know a few methods we can utilize in order to regain our perspective on life. Mostly because I’ve been faced with this kind of dilemma before.

The first step is to give yourself time to come to terms with your disappointment, and to accept that the person in question is a flawed, imperfect being, same as you. The second is to simply keep on going forward with your life. The world doesn’t stop turning because your heroes failed to live up to your expectations. Finally, use this as an opportunity to live and grow, both as an individual and in your relationships with close friends.

It’s like falling in love with someone, but they don’t love you back. At least, not in the same way, or the way you want them to. For example, when I love someone, I go all in. They become the center of my world, and my galaxy orbits around them. It’s almost obsessive, but in a well-meaning way. I just want the person to know how important they are to me, and that I’d do anything to help them or show affection toward them. I do put the person up on a pedestal, however, and that’s not completely healthy. People are not perfect, and most of the time, the person I loved so much ends up letting me down.

Ultimately, I feel like there is no easy way to counter the disappointment and betrayal we feel when people don’t live up to our expectations, or even when we ourselves fail to do so. The only method I can honestly say is foolproof is to be patient and give it time. “Time heals all wounds,” as they say, and just because the person you thought was so above it all turned out to be *gasp!* a fallible, imperfect human being doesn’t mean that they’re a failure. In the case of the writer-director I mentioned earlier on, his work remains as inspiring and awesome as it always has been. And yes, just as problematic in some areas, as well. It doesn’t change just because he’s an immoral person. As my friends have told me in the past few days, some of the works of art we admire as a society were created by despicable people. It doesn’t devalue the work itself; rather, it presents us with a glimpse into what that person, and all of us, could be when we practice what we preach and live as our best selves.

And as for the person I loved… Well, that was a complex situation. I do know that the experience changed me in a profound way. I’ve become more open to things I would have shut out or ignored in the past. I think the experience of being in love with her is something I’ll always treasure, and I believe that she played a part in making me a better person because of it. It may not have worked out the way I wanted it to, but I wouldn’t erase those feelings from my memory or change the way things happened. All I know is, I opened myself up. I loved someone. And that has shaped me into a new creation.

In a way, facing disappointment when things don’t go our way or when we feel betrayed gives us an opportunity for immense personal growth. We find ourselves faced with the mundane reality that we all are fallible, as we make mistakes and discover how tragically imperfect we are. And yes, there is a void left in our souls when the person we cherish leaves us or someone we respect lets us down. Nothing will ever change that fact, I’m afraid. But that doesn’t mean we give up. We can fill that void by volunteering our time to help others who are in need, or by meeting new people and cultivating friendships. We can learn from our experiences and do better, embracing our flaws as tools we can use to develop into more stable and mature human beings. The key is to be open to our weaknesses as well as our strengths, and to use that knowledge to become more well-rounded individuals.

I’m not perfect, that writer-director isn’t perfect, and the woman I loved isn’t perfect, either. However, that doesn’t mean we can’t still inspire one another to strive for more, to be better people, to grow and mature into our ideal selves, and to make the world a better place.

That, my friends, is the moral of the story.