Here’s How Much of a Matchmaker Can Be, Based on Your Personality Type 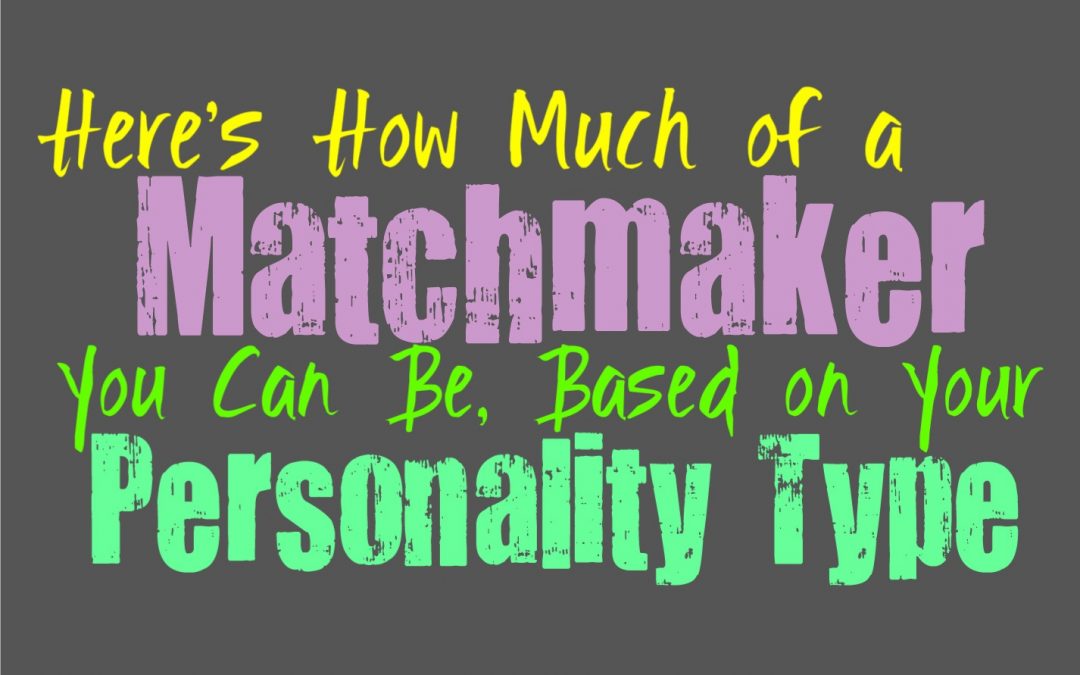 Here’s How Much of a Matchmaker Can Be, Based on Your Personality Type

Some people enjoy being able to help others come together and find romance. While some people simply don’t care others feel like natural cupids. Here is how much of a matchmaker you are, based on your personality type.

INFJs might not fancy themselves a matchmaker, but in truth it is something they are good at. They can often see when people have a connection and are great at playing mediator. INFJs understand people and their emotions rather well, which helps them get a grasp on who people will be good with. INFJs will often help two people they care for make a connection, especially if they are having trouble opening up to one another. Being a matchmaker is definitely something most INFJs are good at, even if they aren’t eager to be one.

ENFJs are definitely great matchmakers, and they often enjoy taking on this title. ENFJs love being able to bring people together, especially in a romantic fashion. They often believe that finding love is truly important, and want to do what they can to help others be happy. For the ENFJ making their loved ones happy is the most vital thing, which is why matchmaking is something they value. They understanding the emotions of others and this helps them mediate and bring others together.

INFPs aren’t really fans of having to play matchmaker, since they often feels like it might get them into trouble. INFPs want to see others happy, and will help when they are enlisted to do so. Otherwise INFPs will simply want to inspire people to follow their own hearts in order to make decisions about their love lives. INFPs can help people follow their desires when it comes to someone they like, but they don’t want to coerce people towards something they might not really want.

ENFPs aren’t often fans of being matchmakers, since they prefer to let people make their own romantic choices. There are times when the ENFP might help someone uncover who they have feelings for, but they do this by inspiring them to follow their own hearts. They don’t want to control someone’s romantic lives, and instead want to help them gain the confidence to go after what they want. ENFPs believe in following their hearts and seeking out the people who make them happy, they often believe that finding the right relationship is important as well.

INTJs are not usually seen as matchmakers, since they aren’t really interested in meddling in other people’s romantic lives. INTJs would rather give people their space and let them make their own decisions when it comes to their love lives. They are often good at giving helpful advice however, and will try to give someone perspective if they ask for it. INTJs simply don’t feel the need to play the matchmaker, since they understand that some people might not be in a place to take on a new relationship in their lives.

ENTJs really aren’t matchmakers, and would much rather let people take care of their own romantic lives. For the ENTJ it is more important to let people figure things out themselves, and believe in having a sense of independence. They might see that two people like one another, but they rarely feel the need to step in and give them a shove. ENTJs let people do their own things, unless someone comes to them for advice in the mater. They are more interested in getting things done and are always working towards building a future for themselves and their loved ones.

INTPs aren’t really seen as matchmakers and often dislike meddling in other people’s lives. While they will do their best to give someone advice when they request it, INTPs aren’t like to stick their nose in. They don’t really see themselves as matchmakers since they aren’t great at deciphering emotions. In order to be skilled at pairing people and brining romance into a situation, it requires a close connection with feelings and emotions, which is something INTPs simply do not possess.

ENTPs really aren’t matchmakers, mostly because they aren’t fans of meddling in this way. ENTPs aren’t strongly connected to emotions, so it makes it challenging for them to really pair others up. They do care about their loved ones and want to see them happy, but ENTPs are more interested in inspiring people who seek out what they want rather than showing them in detail what they should do. They aren’t really much for matchmaking, instead they would rather allow people to make those choices for themselves.

ISTJs aren’t really the matchmaking types, and prefer not to meddle. They believe in allowing other people a sense of independence and giving them a chance to make those choices on their own. ISTJs also aren’t that in touch with emotions so it isn’t natural for them to try and connect two people in this way. For the ISTJ is better to let people make their own romantic decisions, and because of this they really aren’t matchmakers.

ESTJs aren’t much for matchmaking and would rather let people make their own choices when it comes to romance. ESTJs do believe in helping people by giving them advice about their lives and their choices, but oftentimes this isn’t about their romantic lives. They don’t like trying to push people together and often feel like this is being smothering. ESTJs really aren’t matchmakers, and would rather not get in the middle of people’s romantic decisions.

There are times when ISFJs can make great matchmakers, and they don’t mind meddling a bit. If they see people who seem right together, the ISFJ will certainly step in and try to bring them closer. They often understand the emotions of others which helps them to mediate and find ways to connect these two people. For the ISFJ matchmaking is about trying to make two people happy by bringing them together and helping them understand their feelings for one another.

ESFJs can sometimes be seen as matchmakers, especially since they want to make others happy. If they see that their loved ones could be happy together, they will work to bring them together. ESFJs are good at understanding the emotions of others, which helps them become great at mediating when two people are struggling to express their feelings. ESFJs enjoy being able to be a matchmaker for others, especially if it could really end up making two people happy.

ISTPs definitely aren’t matchmakers, and dislike meddling in this way. They would much rather let people make their own choices, especially when it comes to their love lives. ISTPs would become truly frustrated if someone attempting to match them up with someone, and so they don’t want to do this to another person themselves. For the ISTP independence is important, so they will rarely feel the need to meddle in other people’s love lives.

ISFPs aren’t often fans of matchmaking, especially if someone is protesting the idea. They will help their friends get together if it is something they are open to, since they enjoy seeing people fall in love. ISFPs enjoy romance quite a bit, and to them being able to bring two people together is a wonderful thing. They can meddle on occasion if it seems like the right thing to do, and as long as their loved ones won’t be angry about it.

ESFPs can sometimes play the matchmaker, especially for the people they love the most. If they see someone close to them isn’t making the best romantic choices, the ESFP might feel the need to step in. They often look at things from a unique perspective, and will do their best to connect people who seem right for one another. ESFPs like to give people space to make their own choices, but at the same time they reach a point where it seems like the best choice to step in and meddle a bit.