Here’s How Easily You Can Detach From Others, Based on Your Personality Type 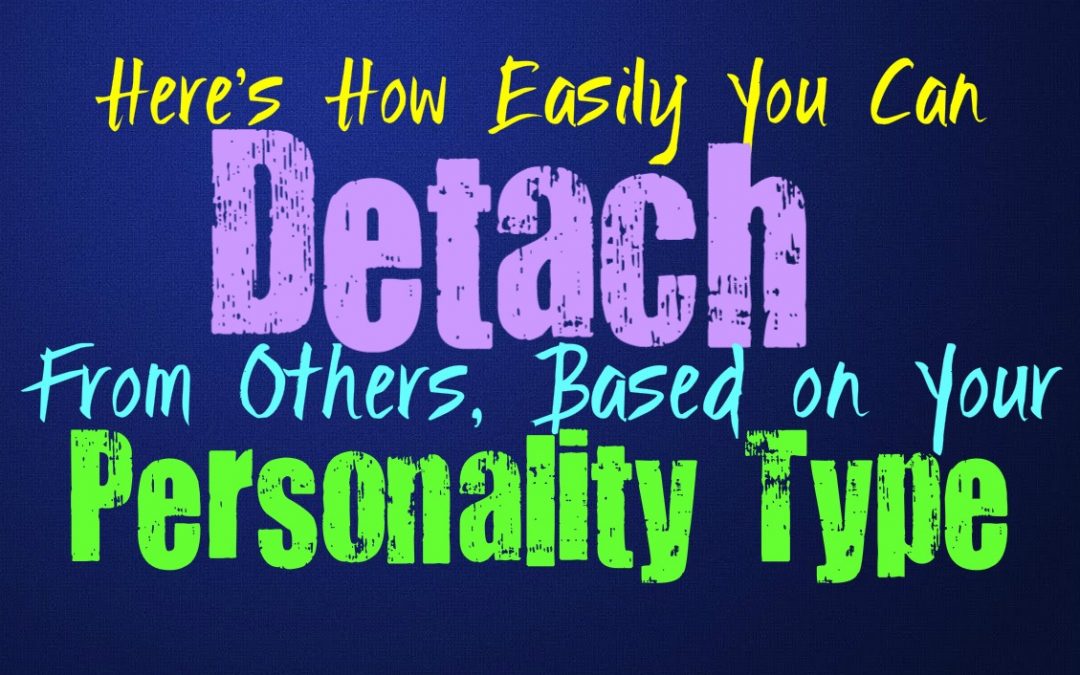 Here’s How Easily You Can Detach From Others, Based on Your Personality Type

While some people find it very difficult to emotionally detach from someone they care for, others can do it when they have been pushed far enough. For some self-preservation is important and sometimes that means they need to close the door on a relationship. Here is how easily you can detach, based on your personality type.

INFJs are very connected to their loved ones and want to remain committed to their relationships. INFJs love very deeply and will work hard to make their relationship work and last as long as possible. While INFJs will do anything for the people they love, they have limits to just how much they can take from someone. If their loved ones continue to emotionally abuse them or take them for granted, the INFJ will try to let them know they are reaching their limit. If that person does not come around or put forth effort, then ultimately the INFJ will be capable of detaching. They will close the door on that relationship and will disconnect from the person who continued to hurt them.

ENFJs are compassionate people who can often understand and be patient when others make mistakes. ENFJs can definitely give people plenty of chances when they do something that upsets them, and will try to make things work. When the ENFJ cares for someone they are loyal to them and will go above and beyond to make them happy. While detaching from others can be truly challenging for the ENFJ, they reach a point where they have no other options. If it seems like someone is never going to make a true effort and simply continues to hurt the ENFJ< they will detach from them and close that person out.

INFPs definitely have a hard time detaching from people, since they are often steered by their emotions. Their desire to follow their hearts makes it difficult for them to shut their own feelings out. When the INFP cares for someone they don’t find it easy to simply detach from them, even when that person hurts them. INFPs might come to the conclusion that they need to shut someone out of their lives, but they rarely detach from them emotionally. They simply remove this person from their lives, but the INFP likely still feels the connection in some ways.

While ENFPs are often good at making it appear like they are detached, they often feel things on a much deeper level. ENFPs have a hard time truly detaching when they feel something for someone, and have rather complex emotions. When the ENFP cares they cannot simply disconnect and stop themselves from feeling this way. While the ENFP might eventually remove someone from their lives, they still feel for them in a way that most people cannot truly understand. ENFPs might even continue to have some sort of connection to these emotions years after they have cut ties.

INTJs can definitely detach, at least when it comes to responding to their emotions. While they will likely still feel for this person, they can detach from those emotions in order to respond using logic and reason. INTJs simply don’t like following their feelings in order to make decisions and always want to be sure they are making the most logical and practical decisions. There are times when the INTJ will struggle to let go of someone they care for, but they still know that it is the best thing for them. They take their commitments seriously, but at the same time they know when someone is incapable of changing for the better.

ENTJs can often detach from their emotions, which helps them disconnect from people in some ways. This isn’t something the ENTJ does without thought, since they actually take their commitments and connections very seriously. When the ENTJ cares for someone they want to hold onto this forever, and believe in making bonds that will last. They don’t want to step away from someone when they have committed to them, and will do whatever they can to make things work. When the ENTJ does feel like someone is taking advantage of them or like they need to disconnect, they often detach from their emotions and try to approach the decision from a logical standpoint.

INTPs can appear detached, but they are very connected to the people they care for. They will attempt to approach things from a logical position, even though their emotions will be trying to cloud their judgement. INTPs prefer to be logical about their decisions and don’t want to allow their feelings to get in the way. They feel things very deeply, they just don’t want to make the wrong choice because they don’t trust emotions in these situations. INTPs will be capable of moving on and detaching from someone if they believe it is the right decision to make.

While ENTPs do care for their loved ones deeply, they are capable of detaching in some ways. When they feel like someone isn’t treating them right or is toxic for them, the ENTP will try to detach from their emotions and approach the situation from a logical standpoint. The ENTP will disconnect from someone if they have thoroughly come to the conclusion that there is nothing to be salvaged from the relationship. They have a hard time letting go, but at the same time the ENTP doesn’t want to let people hold them back.

ISTJs have a hard time walking away from someone once they have made a serious commitment. They don’t find it easy to simply disconnect, and will continue to try and make things work. The ISTJ will often have a hard time letting go and won’t find it easy to simply detach. While they aren’t ruled by their emotions, they don’t easily detach once they have made a connection with someone.

ESTJs actually find it truly difficult to detach once they have made a connection with someone. They can detach from new connections, or from people they don’t know well, but when they have committed to someone that is entirely different for them. ESTJs take these commitments seriously and want to find ways to make the relationships work no matter what.

ISFJs definitely find it difficult to detach from others, especially once they care for them. Once the ISFJ is committed to someone they want to nurture that relationship in any way possible. The ISFJ doesn’t like giving up on someone and will continue to work on the relationship. ISFJs definitely do not detach easily, it is one of the most challenging things for them to do. While it can be difficult, they do often reach a limit when someone continues to take advantage of them for far too long.

ESFJs don’t detach easily from others, and take their commitments very seriously. When the ESFJ cares for someone they want to keep a close bond with them no matter what. They will often go above and beyond to make others happy, even when it seems like these people don’t always appreciate it. The ESFJ does reach a limit however, when it seems like they are continuously being taken advantage of. When this happens the ESFJ will appear detached and will certainly disconnect from the relationship. This is hard for them but they are capable of it once they have been pushed too far.

ISTPs often try to use logic and practicality to make their decisions, so sometimes they need to detach from others. If the ISTP believes that a person is no good for them, they will likely take a step back and try to detach from the emotions of the situation. They do this so that they can make a logical decision about that individual and if they can actually make things work.

ESTPs can definitely disconnect from people if they feel like it is what they have to do. While they will try to detach, it isn’t something ESTP can do easily. Once the ESTP cares about someone and lets them in, they often cannot let go of those feelings. They may even care for that person years down the line, and will find it hard to truly forget them and the bond they shared.

ISFPs really don’t detach easily, even when they cut someone out of their lives. When the ISFP feels like they need to remove a toxic person from their lives, they often still care for them a long time after. It can be very painful for the ISFP to disconnect from someone, and is something they will likely mourn over. When this happens the ISFP will try to avoid that person in the future, but the feelings will likely remain rather strong.

ESFPs can definitely detach from certain people but this only happens as a means of self-preservation. If the ESFP cares for someone it is something that runs very deep, and they can be hurt easily by these people. They have sensitive hearts which can be damaged by the people they love, so ESFPs can sometimes find the need to detach. When a person continues to hurt them the ESFP will try to avoid that person entirely in order to avoid that pain once again.