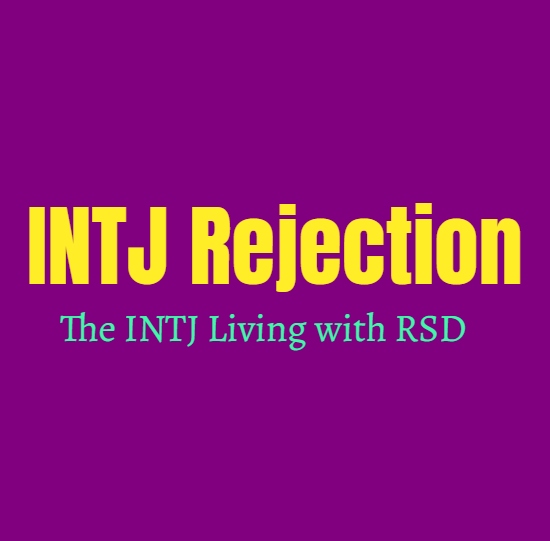 INTJs often do their best to process rejection and try not to allow emotions to cloud their judgement or behavior. They want to focus on facts and logic, rather than allowing negative feelings to hold them back. That doesn’t mean rejection won’t hurt them, INTJs can sometimes respond to this by trying to improve and taking it on as some sort of a challenge. They simply try their best to push past these feelings without allowing them to hold them back. When it comes to experiencing RSD this is an entirely different situation as it is a condition which the INTJ cannot simply overcome or ignore without help. Anything like this is often very frustrating for INTJs, since they don’t want something out of their control affecting their lives.

When it comes to rejection for the INTJ it often depends on the specific situation and who they are feeling rejected by. If this is done by someone they are not close to or don’t know well then the INTJ can often move on from this rather easily. They don’t want to allow outside people to really affect them or prevent them from getting things done efficiently. When it comes to their loved ones and the people they trust this can be entirely different for the INTJ. They take a long time to really trust someone or let them in, and they want people who are loyal and supportive of them. When someone they care for rejects them in some way, it can be rather difficult for the INTJ to figure out how to process these feelings. While they don’t mind people challenging them or disagreeing with their opinions, feeling a sincere sense of rejection from their loved ones is entirely different for them. This can cause them to appear somewhat shut down or closed off to this person after, not wanting to subject themselves to that negative feeling again. This doesn’t mean they will cut that person out completely, they just might feel distant for a little bit. They don’t want to appear like they are being emotional, but can have a hard time really working through these emotions.

RSD is something that people with ADHD or ADD can suffer with, and can be a rather debilitating thing to deal with. For these people it becomes beyond painful when they experience a sense of rejection, and causes them to continuously obsess over it. They can perceive a rejection which hasn’t really occurred, feeling as if someone has slighted them when it was not their intentions at all. They can feel like they have been criticized by people they love rather easily, and this is really too much for them to handle in those moments. It is something which comes on in random situations, which makes it hard to really seek out ways of moving forward or avoiding these situations. For the INTJ living with RSD it can be difficult to cope with these feelings, since they prefer things which they see as logical. They have a hard time with anything which goes against this logical part of their mind, and so not being able to just let go of these feelings can be overwhelming for them. The INTJ might assess this as some sort of personal failure at first, instead of recognizing that they need to seek help for it. This is why research is so beneficial for the INTJ, since it allows their mind to wrap around the scientific aspect of what they are dealing with. Being someone who prefers to focus on practical things and being efficient, makes it hard for the INTJ who is constantly fearful of rejection and the pain they feel from this. They can become rather reclusive because of it, wanting to shut themselves out from the world and situations which leave them feeling rejected or criticized.

For the INTJ who dislikes feeling rejection, sometimes communication is the best step. They care about their loved ones and want to feel valued by them, and so just learning how to express themselves better can be helpful. It isn’t necessarily easy for them, but can be a useful tool towards moving forward and letting go of those feelings. The closer they are to someone the better this will feel, as they can work through ways of avoiding this in the future. They won’t have to feel like they are distancing themselves from an important relationship, and will certainly appreciate loved ones who are willing to mend the situation and avoid doing it again in the future.

For anyone dealing with RSD the situation isn’t just about seeking therapy or becoming comfortable with themselves. There are certain medications which might be necessary, especially for someone who seems to be really held back by this. It is always beneficial to seek help from a professional., especially with something like RSD. For the INTJ research is always a useful tool in understanding what they are going through and in finding ways to better their situation. Being more aware of it and understanding the factual pieces of the puzzle can give the INTJ a sense of hope for how it can all be improved.