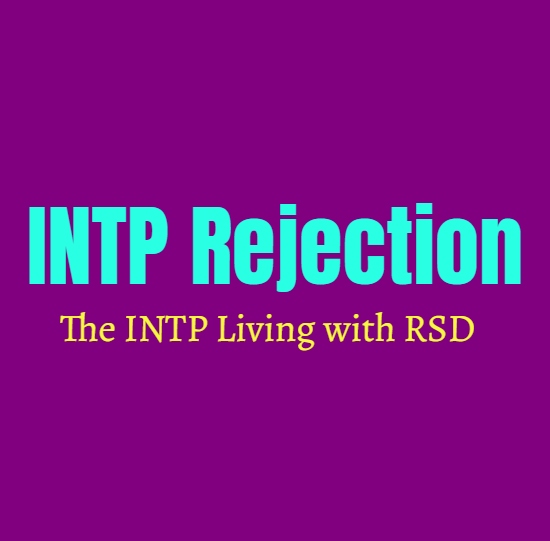 Like most people, INTPs aren’t really fans of experiencing rejection from the people they love. They can find ways to process outside rejection, often by trying to avoid focusing on the emotions and instead focusing on the logical aspects of it. INTPs might not appear to be affected by rejection or criticism, since a lot of their feelings are kept inside. Most people don’t realize or notice when the INTP is struggling or when they have been hurt by someone they love. This can make rejection even harder for them at times, since people write them off as fine or unbothered. When it comes to experiencing RSD this can be a challenge for INTPs, since they don’t always find it easy to recognize when something like this is out of their control.

When INTPs truly care about someone they can really struggle with the idea of being rejected by this person. This is why they might not seem like the most forward people, since the thought of being vulnerable can be a bit terrifying. They might attempt to avoid rejection entirely, and instead wait for other people to make the first move. Putting themselves out there and feeling rejected or criticized can be a surprisingly painful experience for the INTP. They prefer to focus on information and logic, rather than allowing feelings to get in the way or cloud their judgement. They might try to pass it off as if they are fine, when in reality they can be hurt deeply by the people they love and care for. INTPs feel emotions just like everyone else, they just struggle to process and express them in an outward manner. When it comes to rejection they might try to avoid taking notice of these feelings, which can certainly cause them to come out in other ways. INTPs would rather avoid situations where they can feel this type of emotional response, but that doesn’t really protect them from it all of the time. They can still struggle to really process certain criticism, especially when it comes from someone they care about and rely on. They want to be open to hearing other people’s thoughts, they just become more sensitive to these things when they have let someone in and really trust them. It can be much easier for the INTP to move on from outside rejection or criticism, but even still they can internalize these feelings and blame themselves for some perceived failure.

RSD is something that people with ADHD or ADD can suffer with, and can be a rather debilitating thing to deal with. For these people it becomes beyond painful when they experience a sense of rejection, and causes them to continuously obsess over it. They can perceive a rejection which hasn’t really occurred, feeling as if someone has slighted them when it was not their intentions at all. They can feel like they have been criticized by people they love rather easily, and this is really too much for them to handle in those moments. It is something which comes on in random situations, which makes it hard to really seek out ways of moving forward or avoiding these situations. For the INTP this becomes a struggle because they don’t always find it easy to recognize their own feelings. When they are dealing with RSD they might try to push it aside, which can cause them to become rather reclusive. They might appear like they just don’t care to try new things or step outside of their comfort zone, but this is often because they are struggling with RSD. They find it crippling to experience rejection for things, and so they avoid putting themselves out there entirely. Instead of taking the chance to learn and grow, the INTP becomes reclusive and doesn’t want to expose themselves to opportunities and possibilities. They struggle to find the way to push past this unless they have taken time to research and probably find a diagnosis. For the INTP with RSD it often becomes difficult to cope with this pain from rejection, and so avoiding it entirely becomes their go-to response. In some cases they can go into perfectionist mode, wanting to put on an act and outside image so that people cannot reject their true selves.

For the INTP who struggles with rejection the best thing is to be open with the ones they love. Finding ways to express their feelings more comfortably can help the people around them to understand where they are coming from. Burying those emotions can only cause them to fester and often become worse over time. Rather than alienating themselves the INTP can benefit from trying to express what is bothering them, even if they do this in small doses.

For anyone dealing with RSD the situation isn’t just about seeking therapy or becoming comfortable with themselves. There are certain medications which might be necessary, especially for someone who seems to be really held back by this. It is always beneficial to seek help from a professional., especially with something like RSD. INTPs benefit from doing research and learning more about RSD, as it gives them a logical handle on the situation. Knowing what their next step is can help them to realize they are not to blame for experiencing those difficult emotional responses to rejection.