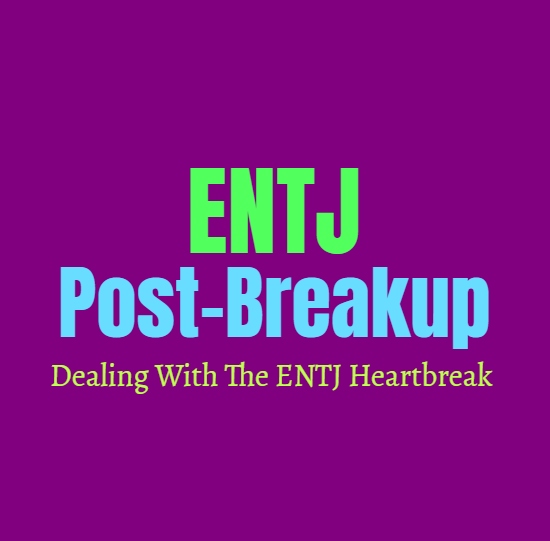 Enduring heartbreak is something most everyone has to go through at some point in our lives. While it is a part of life and a very common human experience, that doesn’t make it any easier to get through it. Each person has their own process and needs to go through their breakup in certain ways in order to move on and really cope with what is going on inside of them. It is important to understand ourselves better so that we can figure out the best way to heal from heartbreak.

ENTJs can be somewhat guarded people at times, and they focus on growing themselves and doing what they can to improve. When it comes to romance and relationships they do not enter into things lightly, which is why breakups and heartbreak can actually hit them harder than people think. While on the surface the ENTJ might focus on their goals and keeping those feelings inside, that doesn’t mean they do not struggle with it. Loyalty is so important to them, and when they care about someone they take this commitment seriously. For the ENTJ how they deal with a breakup often depends on the seriousness of the relationship, and if they had set goals for the future with this individual.

For the ENTJ there are two ways they often respond post-breakup, and this entirely depends on the seriousness of that relationship. If the ENTJ didn’t have deep feelings for this person and likely wanted things to end, they can deal with it fairly well. They can logically see how it could not work, and don’t feel that sense of connection which is worth holding onto. They will most likely try to move on by being social, and by connecting with their friends and loved ones. Having people to spend time with can be a good distraction, but it likely won’t take long for them to move on and let go, especially when they realize it wasn’t the right person. They likely won’t be upset, and might appear cold to those around them. In reality this is just the practical side of the ENTJ, as they don’t feel like it was a bad choice and is something they can learn from instead.

When the ENTJ truly loved the person, this heartbreak is something which can settle in deep for them. When they care about a person and have committed to what they had with them, it seems almost impossible to move on and let go. The ENTJ wants to go into a mode of fighting for that relationship, of doing everything they possibly can to make things work. They try and come up with logical and practical solutions, and might struggle to really let this person go from their lives. They don’t like simply giving up when they care about someone, and believe in working to make things right rather than just letting go. This can make the breakup truly difficult for the ENTJ, as they might find themselves holding onto those feelings for a long time after things have ended. They likely think about ways things could have been better, and might want to contact this person again in hopes of making amends and woking things out. The ENTJ might even want to remain single for a while, not feeling like jumping into something else is the right choice for them. While some people seek out other romantic interests as a distraction from the heartbreak, the ENTJ would rather wait things out before they jump into something again. This helps them to see things from a logical standpoint and even try to learn from what they have experienced. The ENTJ might go through a stage of indulgence, turning more to their extraverted sensing function as a means of coping. This can make the ENTJ be a bit more reckless, wanting to seek out things which bring them joy in the present moment. This can simply be a tool for them at first, as a means of burying their feelings rather than really dealing with them right away. ENTJs just don’t like feeling as if they are allowing those feelings to control them, and so sometimes it feels easier to push them aside.

One of the best things for the ENTJ is processing the feelings, as well as trying to learn from them. They can feel a sense of regret, analyzing the situation in hopes of solving the problems. When they truly cared for someone they don’t like letting go, as this can feel like giving up and ENTJs don’t consider themselves quitters. They would often prefer to work on things, and do whatever it takes to fix the problems. In order to actually let go, they need to find a way to see the relationship as a learning experience for the future. Look at the things they gained and the experiences which likely made them a better partner for their future companion. The process isn’t always an easy one, as ENTJs don’t really let go all that easily when they have committed to someone or something. It is important for them to seek out connections with their friends as well, as these people can help them see potential in the future instead of focusing on the past. Self-improvement is a great tool for ENTJs, and so setting goals and working hard to make them happen really makes a difference for them. They can focus on the future and see the path which will help them to let go and move on in the way they need to. The ENTJ might need to take some time to process their emotions, but after this they do better moving forward and focusing on themselves and the goals they have set. Dwelling too much on the best can cause the ENTJ to feel trapped, rather than see what they can become and the life they see for themselves.