Just How Likely You Are to Believe in the Supernatural, Based on Your Personality Type 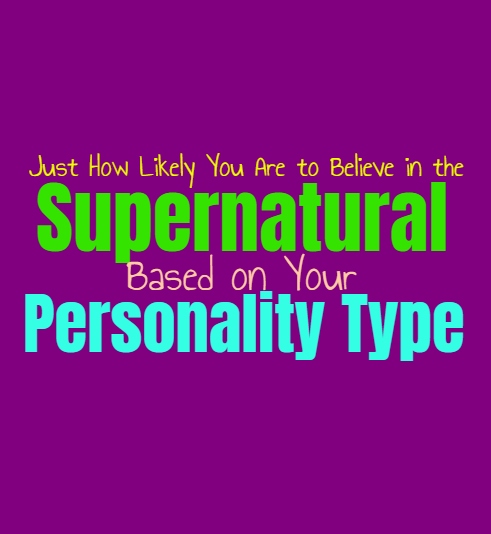 Just How Likely You Are to Believe in the Supernatural, Based on Your Personality Type

INFJs are often more sensitive to things they cannot see, since they are connected to their intuition. This causes them to believe in something which cannot be easily proven, since they are cataloging information subconsciously. INFJs who trust in their own intuition, are often more likely to believe in the possibility of the supernatural. They might not believe in it more shocking things, but they can certainly be connected to their spiritual side in some ways. INFJs can certainly be capable of opening their minds to these things, even if it can be challenging at times since they are also factual people.

ENFJ
ENFJs are often more open to new beliefs than it seems, since they are intuitive people. Their sense of empathy is often what helps them feel more open to things they cannot see. They are connected to both their intuition and their empathy and this makes them sensitive to what cannot be proven in typical ways. ENFJs might not find it easy to believe in the supernatural, since they are often focused on the truth and uncovering facts, it can be a battle for them. ENFJs can go back and forth with these beliefs, between their feelings and wanting to follow logic.

INFPs are often draw to the things they cannot see or prove, wanting to feel more open to the possibilities around them. Because of this sensitivity to their emotions and often their spiritual side, INFPs can be more inclined to believe in the supernatural. This doesn’t mean they believe in things which seem unreasonable or over the top, but they do often believe there is more to life than the things which are tangible. INFPs don’t like being closed off to possibilities and so they often want to imagine or consider that there might be more out there.

ENFP
ENFPs are often sensitive to their emotions and don’t like closing themselves off to possibilities. ENFPs don’t need everything to be tangible and proven for them to believe in it, and so they might be more inclined to consider that supernatural things can exist. While ENFPs don’t like sharing this with others because they also believe in knowledge and facts, they often have a lingering feeling that there might be more to the world than the things they can easily see or prove to the true.

INTJs are often less inclined to believe in the supernatural, since they focus on things which can be proven. There are some INTJs however, who might take to trying to prove or disprove supernatural things. For the INTJ it is about the facts and being able to uncover the truth of a situation without any chances of it being confused. They want to dig deeper and figure out every angle of the information, since INTJs don’t like leaving things up to change.

ENTJs are often less likely to believe in things like the supernatural, sine they are drawn to things they can prove. For them simply believing in something which is not tangible, is truly challenging. ENTJs want to be able to prove things and really dive deeper into the information in front of them. For the ENTJ there are sometimes feelings which draw them towards the potential of the supernatural, but they need someone who is capable of convincing them it is possible, with information to back it up.

INTPs are often very factual people, but they are also open to new possibilities. While INTPs might not easily believe in the existence of the supernatural, this doesn’t mean they won’t consider it. INTPs like to look at all of the angles and really dive in with a more open mind. They learn best by being more open-minded and allowing themselves to consider each different potential outcomes of a situation. INTPs might be skeptical, but that doesn’t mean they aren’t capable of believing in things they cannot see proven just yet.

ENTPs are often very skeptical people, but at the same time they like to keep their minds open to possibilities. They don’t simply discount something because it has not been proven yet, they often take this as a challenge. ENTPs enjoy diving into different possibilities and will do their best to consider all of the angle. They want to be more open to things, and because of this they will often imagine the possibility of the supernatural existing. This doesn’t mean they will believe it in the long run, but they can be more open to this.

ISTJs are not often likely to believe in the supernatural, since they are practical minded people. They want things to be proven and tangible before they will believe in their existence. They don’t like walking into the unknown and often feel foolish if they are inclined to believe in something which is not proven. ISTJs simply don’t like opening up to things which are unrealistic, since this can leave them susceptible to getting tricked by someone.

ESTjs aren’t likely to believe in things they cannot see or prove. For them the supernatural seems like fantasy ideas which people foolishly believe in. They would much rather focus on proven methods and things which are completely factual. They don’t want to become so open to things that they can be fooled by someone else, and so for the ESTJ believing in anything which is not tangible is just difficult.

ISFJs don’t often find themselves believing in things they cannot see, but they are empathetic people and so this can sometimes open them up to these possibilities. They are often drawn to what is practical, instead of things which are based on their inner emotions. If someone they love does believe in the supernatural, then the ISFJ might be more inclined to consider this an option. They need to be convinced by someone they trust or else it is truly unlikely.

ESFJs often find themselves battling with their potential belief in the supernatural. They are naturally more practical people who want to follow proven methods in order to get things done. At the same time ESFJs are very in touch with their sense of empathy, which is something much less tangible and so it can open them up to other beliefs. It often depends on how they grew up and if they were raised in an environment which was open to believing in the things they cannot see.

ISTPs are often very focused and factual people, and so they don’t believe in things without some sort of evidence. They do realize that not everything true has been proven, but even still it is hard for them not to be skeptical. Most of the time ISTPs struggle to really believe in anything which is not tangible or cannot be proven. They might be open-minded to some new things, but most of the time believing in the supernatural is difficult for ISTPs.

ESTPs are often more open-minded than people realize, but believing in the supernatural can be hard for them. Anything which they cannot see with their own eyes, is not easy for the ESTP to believe in. They are focused on the physical world and so for them facts and evidence is often very important. ESTPs are more drawn to believing in things which are tangible, and so the supernatural is often something they struggle to trust in.

ISFPs are very connected to the physical world but they are also connected to their own inner emotions and beliefs. ISFPs can often be more open to new things, and might even find themselves becoming very spiritual people. They don’t want to close themselves off to things simply because they cannot see it in front of them. If the ISFP feels something in their heart then they are likely to believe in without question.

ESFPs often go back and forth when it comes to their belief in the supernatural. They are often drawn to new ideas and things which are exciting and different. ESFPs might want to believe in supernatural things more than they actually do, since their draw to the physical world makes it hard for them to trust what they cannot see. ESFPs also believe in following their hearts, and so this can be an ongoing battle for them.