The Feelings Attached to Baring Your Soul for Each Personality Type 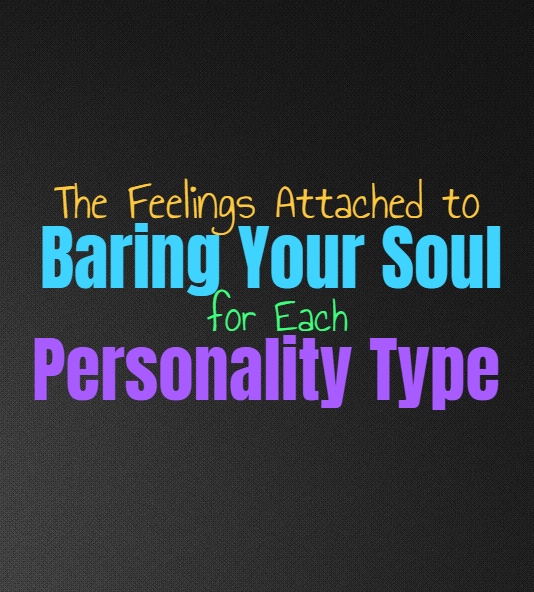 The Feelings Attached to Baring Your Soul for Each Personality Type

There are times when you need to open up or when your creative desires force you to be a bit more vulnerable. Truly baring your soul is often a frightening experience, but it is something each person will handle differently and in their own unique way. Here is how you feel about or respond to baring your soul, based on your personality type.

For the INFJ baring their soul is often terrifying, as they aren’t comfortable being this vulnerable with most people. It takes a long time for the INFJ to peel back their layers and expose themselves to those they trust. This is something which can take a while and really be a long and drawn out process. The idea of really baring their soul to someone is both thrilling and truly frightening for the INFJ. They want to feel safe enough to open up and show these deeper parts of themselves, both the light and darkness. For the INFJ it is something they dream of, but something which scares them and they rarely feel truly safe enough to do this.

ENFJs are often outgoing and friendly people who care about connecting with others. While they do enjoy being able to share parts of themselves, this doesn’t mean they always feel comfortable or open with this. When it comes to truly baring their soul and the inner workings of their minds, the ENFJ can actually find this a bit frightening. They desire someone they can trust enough to really share these things with, but that doesn’t mean they can do this easily without a sense of fear and trepidation attached. ENFJs are afraid of being rejected, especially by someone they love and care for.

INFPs often want to be open about their feelings and thoughts and everything inside of them. While baring their soul can be frightening, this is something which the INFP deeply craves. They want to be able to be vulnerable and open with those they love. For the INFP being able to connect with someone and completely bare their soul, is something which gives them a sense of hope that they can be understand and share themselves with others. While it can certainly be something they are uneasy about, it is also something which is important to the INFP.

ENFPs do often crave the feeling of baring their soul to someone, and feeling safe enough to fully open up. ENFPs have so much going on inside of their hearts and their minds, and so it can be difficult for them to really make others understand this. While they might feel doubtful that someone can understand them, ENFPs also crave this immensely. They want to find someone they feel safe truly baring their soul to, and really desire this feeling of connection on a much deeper level.

INTJs rarely find the idea of baring their soul to be all that appealing, since this would require them to actually dive into their own emotions. For the INTJ the idea of having to bare their soul to someone is often unnerving and feels a bit pointless. This can even feel dangerous for the INTJ, since they can be a bit doubtful and untrusting when it comes to being around others. For them it can feel a bit unwise to expose their feelings to others, when they could simply be used against the INTJ later on.

ENTJs are often left feeling anxious and a bit scared of the idea of baring their soul to someone. They don’t like feeling exposed or vulnerable, instead they believe in trying to maintain a sense of control of their lives. For them it isn’t smart or comfortable to bare their souls and really let their feelings out to others. ENTJs want to feel like they can trust someone enough to do this, but that doesn’t make it any easier for them to go through with it.

INTPs really don’t feel comfortable or happy about the idea of baring their soul to someone else. While part of the INTP does crave the idea of being able to trust someone and share themselves with them, that does not make it any easier. They want to connect with someone and feel truly understood by them, but this isn’t something which they find easy to open up to. They can often be doubtful that others will understand or appreciate them and so baring their soul can certainly be difficult for them.

ENTPs don’t feel safe or comfortable exposing themselves or baring their souls to most people. ENTPs have so much going on inside of them, but that does not make it easy for them to let all of this out. They often prefer to focus more on their minds than their feelings, wanting to favor logic rather than allow their emotions to control them. ENTPs do want to be able to connect with someone they love, but often the idea of truly baring their soul is a bit overwhelming for them.

ISTJs really aren’t comfortable baring their souls to others, since they don’t like diving into their own emotions most of the time. It can be difficult for the ISTJ to really open up about their feelings, since they prefer to focus on logic and practicality. They want to dive into the means of working hard and moving forward in their lives. ISTJs are hardworking people who truly love their families, but this doesn’t make it easy for them to bare their soul.

ESTJs really don’t naturally bare their soul to others, since they are more focused on being practical. They would rather work hard to get things done and uncover the facts of a situation. ESTJs don’t like doing anything which is based on emotions, since for them this often can lead to making mistakes and being less efficient. While they try to focus on practical things and taking care of their families, baring their souls is both unrealistic and terrifying.

ISFJs want to feel connected to the people they love, but that doesn’t make it easy for them to bare their souls. While they want to be able to connect with others, it can be a bit terrifying to really open up and share their feelings. For the ISFJ exposing their feelings means risking being a burden, or being hurt because of it. For them it is definitely something they desire, but also something they are often too afraid to do.

ESFJs really want to open to the ones they love, and they care about sharing themselves. While ESFJs might want to find someone they can trust to bare their soul to, it is something which can be rather terrifying for them. ESFJs are often fearful of being vulnerable since it leaves them afraid that they might be rejected, or that they will feel like a burden to someone they love. For them baring their soul is truly difficult, which is often why sharing their creativity is unnerving.

ISTPs don’t like baring their souls and often feel very fearful of this idea. They are more focused on facts and getting things done their own way. For the ISTP even focusing on their own feelings is truly challenging for them, since they prefer to use their minds to make choices. They strive for a sense of independence, but the idea of being vulnerable can actually be something which scares them. For the ISTP baring their soul really isn’t something they are drawn to most of the time, and this can be difficult for them.

ESTPs can be afraid of baring their soul to someone, except for them they trust someone deeply. ESTPs do want to connected with others, and enjoy the idea of sharing their hearts and their thoughts with someone they feel comfortable around. While this is something they desire, it takes a lot for them to actually feel comfortable doing this. It is hard for them to really open up, and baring their soul is something they often hesitate with.

ISFPs are often afraid of baring their soul, but this is something they deeply crave. They are often willing to take the chance though, since ISFPs follow their hearts and don’t want to allow fear to hold them back. They do what inspires them most, and believe in standing by these choices and emotions. For the ISFP baring their soul is something which can leave them feeling fulfilled and connected.

ESFPs often bare their soul to people they love naturally, and don’t really need to be forced into this. For some people the idea can be frightening, but ESFPs don’t feel right holding things inside of them. They really do believe in baring their soul and being able to really express their hearts and minds to the people they care for most. They aren’t as afraid of being vulnerable, instead they just allow themselves to follow what feels right.