What Do You Think About Selling Out, Based on Your Personality Type 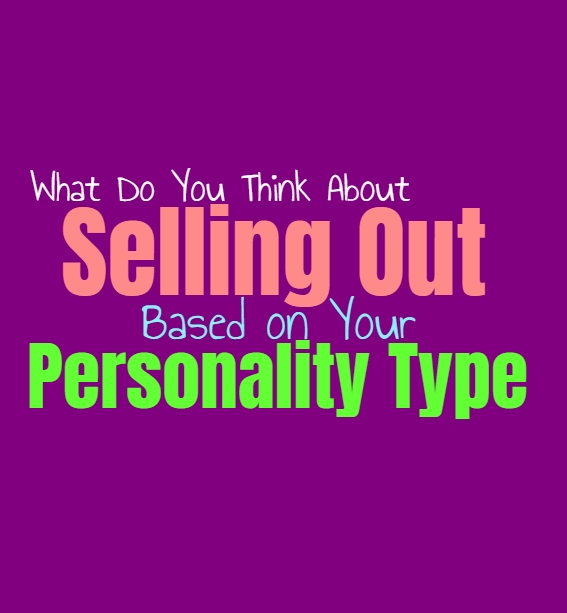 What Do You Think About Selling Out, Based on Your Personality Type

The idea of being a sell out is never a good thing, but to some it seems a bit blown out of proportion. While some people might think that being a “sell out” is awful and immoral, others feel like people dramatize this and don’t understand what is really going on. Here is what you think about selling out, based on your personality type.

INFJs are compassionate people who are often capable of looking at the different sides of a situation. Personally they can become a bit annoyed with the idea of selling out, since they want to remain true to themselves. INFJs don’t like the idea of going against their beliefs simply for money or popularity. On the flipside they can often look at the situation and realize that sometimes people “sell out” because they need the financial stability and they can be sympathetic to this and understand that it isn’t for anything malicious.

ENFJs are often understanding people who try their best to step into the shoes of those around them. This sense of empathy and compassion does help the ENFJ see where someone might need to “sell out” and they often don’t see it as a bad thing. For ENFJs personally it can be hard to compromise their passion and creativity simply for financial stability or popularity, especially with something they are deeply connected to. It is often a back and forth struggle, since they also want to be able to provide for the ones they love and don’t like putting their own needs above this.

INFPs are often strongly against the idea of selling out, since they believe in doing what feels right for them personally. They don’t want to compromise their morals and personal beliefs, which is often what selling out means to them. INFPs have strong inner morals, and they believe in always staying true to themselves and their goals. Selling out means compromise these things which are so deeply important to them, and for the INFP this really isn’t worth doing. It will likely leave them feeling more lost than anything else if they are forced into selling out.

ENFPs care about being true to themselves and their inner morals. They don’t like doing anything which might compromise who they are or what they believe in. While ENFPs enjoy being popular and someone others like, that doesn’t mean they can really handle compromising their morals for this. They might try to sell out a bit when they are younger, falling into things like peer pressure and image. As they get older they realize this just isn’t right for them, and makes them feel much less satisfied than simply being true to themselves.

INTJs don’t like the idea of selling out against what they believe in, but for them this is often something they see differently than others. Simply going after what they want and choosing a sense of accomplishment and stability over their emotions, is not selling out in the eyes of the INTJ. They have goals they believe in and they will push hard to achieve them, but simply compromise emotional goals and feeling is not selling out for them. They actually prefer to choose logic and reason over feelings, this is being true to themselves.

ENTJs don’t really judge people who want to sell out, since they are logical and often practical people. They can often understand why someone would want to be sure they are financially stable. ENTJs also don’t believe in allowing emotions to control them or their choices, since they prefer to be more in control of themselves. If they decide to do something which others consider “selling out” then it really won’t bother the ENTJ. They follow their own goals and choices, regardless of what it means to someone else.

INTPs definitely don’t like the idea of being a sell out, and so they often analyze each situation in hopes of understanding what they consider to be selling out. INTPs realize that everyone is going to see it differently, and they know that some might consider their own actions to be selling out. INTPs try to assess their own opinions on it, so that they can be sure they are remaining true to themselves and their own beliefs, as well as doing what is most logical in the situation.

ENTPs don’t really like the idea of being a sell out, or of doing something just because it seems popular or stable. They believe in following their own path, sometimes this means bouncing around a bit. ENTPs can certainly be willing to make compromises in order to achieve their goals, but for them it isn’t okay to completely sell out for the sake of money or what others want from them. Most of the time they can avoid really selling out, since they just focus on doing what they know to be the right choice for them.

ISTJs definitely don’t consider searching for financial stability to be selling out, since this is a personal goal of theirs. They believe in working hard to achieve their goals, which can often be tied to work and their finances. This is because ISTJs care about creating a stable environment for their family, not being they want to sell out. They are practical people who are more focused on logic and being pragmatic, rather than following their inner emotions.

ESTJs are practical people and so for them selling out means something entirely different than it does to others. They don’t’ believe in following their whims and emotions, instead they believe in doing what they can to achieve their important goals. They want to be able to provide for the practical needs of their family and loved ones, not wanting to do anything which might compromise this in any way.

ISFJ
ISFJs are often practical people who will do just about anything to take care of their family and loved ones. They believe in doing what is right and often have a lot of pressure on them to succeed. They care about being able to tend to the needs of those around them, amd sometimes this can seem like a sell out to people who don’t understand the ISFJ. Their own internal goals and wants are to create harmony and be able to make others happy, and so for them it isn’t selling out when they prioritized practicality over their own emotions or creativity.

ESFJs care about achieving their goals and making their loved ones happy, and so for them selling out really isn’t something they would define the same way as others. For the ESFJ being practical and ensuring their loved ones are financially stable, is not being a sell out at all. For them this simply means they are compromising their own desires, so that they can make the people around them happy and ensure that they are properly cared for.

ISTPs don’t really care about what others think when it comes to selling out. They follow what inspires them in the moment, but they don’t like feeling obligated or controlled by others. If the ISTP wants to go after something in a way that others see selling out, they really don’t care much how it makes people feel. It isn’t about being selfish, for the ISTP it is just about needing to make their own choices regardless of what this means.

ESTPs don’t really care about selling out, for them it is more about following their own path. They can also be focused on logical things, which does mean selling out in the eyes of others. If the ESTP wants to achieve a goal, they are willing to compromise some of their creativity in order to get to where they want to be in life. They live in the present and do what inspires and excites them, but they are sometimes hungry for success.

ISFPs really don’t like being sell outs, instead they want to follow their hearts in life. They believe in doing what inspires them and want to decide things based on their inner sense of morals. ISFPs don’t believe in selling out simply because someone tries to push them in this direction. They want to be sure they are always following their own path and try their best to do what feels right for them.

ESFPs don’t like being sell outs, since they want to be someone who is independent and unique. ESFPs live very much in the present moment, and have little regard for practicality or prior planning. For them it is best to follow their hearts and go down whichever path this might leads them. ESFPs won’t want to be seen as selling out, but they do sometimes go after things which are flashy and might even seek out popularity and financial gain.