Here’s How You Handle Remorse, Based on Your Personality Type 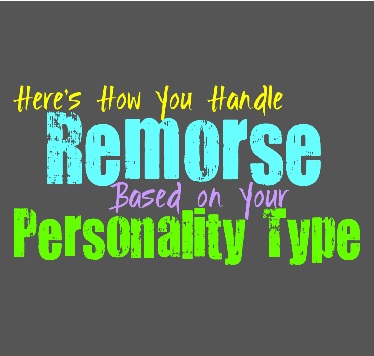 Here’s How You Handle Remorse, Based on Your Personality Type

Some people don’t struggle all that much with remorse, but others certainly do. We each cope with feelings of guilt and remorse in our own way. Here is how you handle feeling remorseful, based on your personality type.

INFJs often live with a lot of remorse for their own actions or mistakes. They can be truly hard on themselves, feeling guilty for things they truly shouldn’t. INFJs simply don’t like feeling as if they have failed others and will take this as a serious loss. They can often blame themselves for certain failing, even when others do not. INFJs feel remorse for a long time and will likely struggle to really overcome these feelings. They will try to find ways to make amends, but INFJs do have a hard time really letting go of their remorse.

ENFJs do sometimes struggle with remorse, especially when they feel like they have failed someone they love. ENFJs go above and beyond to provide for others, and strive to be perfect in a lot of ways. If they feel like they have done something wrong or hurt someone else, the ENFJ will definitely experience deep feelings of remorse. They will try their hardest to make things right but they will often feel a sense of remorsefulness for a long time.

INFPs definitely do feel remorse for their actions, which is why they always strive to do what is right. They try to live their lives with a strong connection to their morals, wanting to make choices they can be proud of. If the INFP does make a mistakes and does something that goes against their own morals, they will definitely feel remorse over this. They will try to find a way to make things right, or in the very least learn from their errors. INFPs might not outwardly express this, but they do feel this deeply and will have a hard time really getting over it.

ENFPs definitely feel a sense of remorse when they hurt someone or make a mistake, but they don’t always express this openly. They can sometimes bury these feelings, in hopes of moving forward and letting go. They will still feel the remorse though and are often much harder on themselves than people realize. ENFPs can definitely put a lot of pressure on themselves to do the right thing, and will feel deeply remorseful when they cannot live up to these expectations.

INTJs try not to dwell on feelings of remorse, instead they try to move forward. If they feel like they have wronged someone or made a mistake, they will do what they can to make amends. INTJs are not above making things right if they have truly done something wrong, and will usually try to make it right. They are very conscious of their actions though, and try to avoid allowing anything to happen that they would feel remorseful about in the first place.

ENTJs try to avoid making mistakes and don’t want to have anything to feel remorseful over. They strive to do things right the first time, and most of their actions are done consciously. ENTJs don’t easily apologize for things, and often they intend everything they say and do. If someone is deeply hurt by the ENTJs actions and they do feel like they have personally made a mistake, they will certainly feel a sense of remorse. But they don’t like dwelling on those feelings and instead would rather doing something practical to make it right.

INTPs definitely feel a sense of remorse when they have done something wrong, but they don’t express this easily. They often struggle to really understand their own emotions and might have a hard time processing these feelings. INTPs do however put a lot of pressure on themselves, and can feel guilty for things that most people don’t even remember. They simply don’t find it easy to process and express these feelings to others in an open manner. That doesn’t mean they are incapable of apologizing, it just means most people don’t recognize how remorseful they can truly be.

ENTPs definitely have a remorseful side if they feel like they have hurt someone or wronged them. ENTPs try to live their lives with a sense of freedom and independence, but sometimes their bluntness can be hurtful to some. They will do their best to make amends and they certainly don’t intend to hurt the people they care for. ENTPs will do their best to make the situation right, and will certainly feel remorse more than people realize. They often mask their emotions with humor or sarcasm, but they do feel things deeply.

ISTJs try to make sure that their actions are precise and exactly what they want them to be. They think before they act and this is how they try to avoid making too many mistakes. ISTJs don’t want to constantly make major errors that lead to feeling remorseful because they have hurt someone else. ISTJs aren’t outwardly emotional people but they care deeply about their loved ones and don’t intend to say things that are harmful. When they do something that causes them to feel a sense of remorse, they try to move forward by solving this in a practical manner.

ESTJs do feel remorse if they sincerely feel like they have hurt someone, but that doesn’t mean expressing this is easy for them. They often try to solve their mistake by doing something practical instead of expressing their emotions. ESTJs might struggle to actually show their remorse, and find it more natural to keep these feelings inside of them. They don’t intend to upset people they simply have a blunt way of explaining things that can sometimes come off as hurtful.

ISFJs feel instantly remorseful when they feel like they have made a mistake or hurt someone else. ISFJs don’t like feeling like they have failed, especially when it comes to their loved ones. They strive to take care of others and do their best to be someone they can rely on. When the ISFJ does make a mistake it leaves them feeling deeply guilty and they will often do whatever they can to make it right. They sometimes run these thoughts over in their mind, trying to find a way to really fix this mistake.

ESFJs feel a strong sense of remorse when it comes to any past mistakes they might have made. They can be rather hard on themselves, sometimes feeling guilty for things they probably shouldn’t. ESFJs don’t like feeling as though they have failed someone they love, and will certainly feel a strong sense of guilt or remorse over this. They will do their best to make things right, often going above and beyond to fix their mistakes. ESFJs will feel remorse over these things for a long time to come, even if others don’t realize this.

ISTPs can sometimes struggle to really understand their own emotions, and they like to avoid feelings of remorse. They don’t want to do anything that might hurt someone, or might cause them to feel angry with the ISTP. They do feel remorse if they have accidentally hurt someone they care for, but they don’t want to dwell on these feelings. Instead they would rather make things right and move forward from the situation.

ESTPs do feel remorse if they feel like their mistake has hurt someone deeply, or has held them back in some way. They do feel guilty over these things, but they don’t like to dwell on it. ESTPs can sometimes bury their own emotions, instead of trying to actually process them. They will want to move on from any negative emotions, and try to live in the present moment instead of dwelling. ESTPs like to live their lives in the present, and have a strong sense of independence.

ISFPs have strong inner morals and strive to do what they feel is right. They don’t want to do anything that would harm someone else and if they do they certainly feel a sense of remorse. ISFPs might even hold onto guilt from past relationships that they had to move on from. ISFPs might seem to bounce from one relationship to the next, but this is because they are searching for the right person. When this happens they feel more remorse than most people truly realize.

ESFPs do feel remorse if they have hurt someone they love, but they try not to let this overwhelm them. They want live their lives in the present and often want to let the past go. ESFPs can feel guilty if they have made a mistake that hurts someone, since they try to make others happy. ESFPs simply don’t want things to hold them back and try to focus on the positive things in their lives. They seek out joy and excitement, instead of feeling stuck.