Here’s How Much of a HSP (Highly Sensitive Person) You Are, Based on Your Personality Type 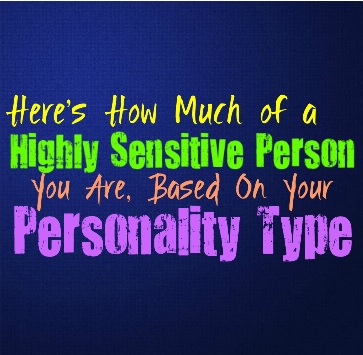 Here’s How Much of a HSP (Highly Sensitive Person) You Are, Based on Your Personality Type

An HSP or Highly Sensitive Person, is someone who is hyper sensitive to the world around them. They can react much differently to the pain of the world and the things they see around them. While it comes with many struggles it also comes with many gifts, and causes these people to be deeply caring and compassionate individuals. Based on your personality type you might be more prone to these behaviors, and so we decided to elaborate on which types are likely to be a highly sensitive person.

INFJs are definitely prone to being an HSP, simply because they are so compassionate and connected to others. They might not show traits that appear highly sensitive, but that is because they often good at keeping this inside. INFJs simply feel things on a much deeper level and are highly affected by what they see and feel. They can feel things that other people are going through and understand these emotions so naturally. This can cause the INFJ to by uneasy simply because they can feel someone else’s emotions. This is something that can be a struggle for them, and is part of why they need so much time by themselves.

ENFJs are often very likely to be a highly sensitive person, since they are so connected to the emotions of others. They find themselves easily affected by the feelings another person, and can feel those emotions without even trying. This sensitivity to others causes the ENFJ to feel overwhelmed sometimes without fully understanding it themselves. They are hyper sensitive to people, and even their environment. This is simply because they are so in tune with the world and the pain they see.

INFPs are often highly sensitive people, simply because they are so connected to their inner emotions. These sensitive and deep emotions can cause them to feel everything in a way that can be challenging sometimes. INFPs might be extremely sensitive, but that does not make them weak or incapable of staying strong. They simply have a connection with others and their emotions, which is what makes them such caring and moral people. They strive to do what is right, because they are so connected to what they see and feel.

ENFPs can be more susceptible to being a HSP, mostly because of their deep and meaningful emotions. They feel things on a level that is truly deep and complex, and sometimes this can cause them to be more sensitive to what they see and feel. ENFPs might try to push through these overwhelming emotions, not wanting to let them affect their behavior. ENFPs can be more likely to be an HSP but that doesn’t mean all ENFPs are this way.

INTJs aren’t usually prone to being an HSP, and this type of thing would be truly challenging for them. They aren’t hyper sensitive to their own emotions or the emotions of others, and are more connected to logic. INTJs follow their heads much more than their hearts, rarely finding those things battling one another. They would rather focus on facts and things that they know can be reliable. They really aren’t commonly seen as highly sensitive people, as this would be conflicting to their personality and very difficult for them.

ENTJs aren’t commonly HSPs, since they aren’t as in touch with their emotions or the emotions of others. ENTJs live their lives following facts and listening to their head instead of their heart. While ENTJs are passionate people who can certainly fall in love and make decisions based on these feelings- that still does not make them HSPs. They often have a hard time expressing their inner emotions and keep most of these things to themselves fairly easily.

INTPs aren’t commonly seen as HSPs, mostly because they keep their emotions inside. The INTPs who are HSPs can often struggle with this immensely, having a hard time truly sifting through these emotions that can be overpowering at times. They can be at war between their heart and their head, trying hard to follow what they know to be factually true. The INTP HSP definitely has their own set of struggles that can be hard for them to deal with on their own. Most INTPs are not prone to this behavior, since they are more connected to facts and logic than they are the sensitivities and emotions of the world.

ENTPs aren’t often seen as HSPs, simply because they are more drawn to facts and logic. They don’t always find it easy to connect with their own emotions and are more likely to bury them. While it isn’t necessarily common, an ENTP HSP is possible. The ENTP with these traits can try truly hard to bury these hyper sensitive emotions, and sometimes the burying makes it even more challenging for them. They might become a bit manic in their efforts to overcome their sensitivities to the emotions around them.

ISTJs aren’t commonly HSPs, since they aren’t very sensitive to their own emotions or the emotions of others. They are more drawn to facts and practical means of getting things done, and prefer to focus on what can be proven. ISTJs can often struggle to understand their own emotions and the emotions of others, making quite the opposite of a HSP. While they do care about their loved ones, they have a hard time really understanding their feelings.

ESTJs aren’t often seen as HSPs, since they aren’t very in touch with their inner emotions or the emotions of others. They can sometimes struggle to connect with feelings and are more in touch with facts and practicality. Most ESTJs actually have a hard time understanding emotions, and can struggle to really stay in touch with them. They care about their loved ones but they don’t really find it easy to connect with what they are feeling, and HSPs are often the opposite.

ISFJs can be somewhat prone to being HSPs, since they are so in touch with the emotions of others. Sometimes they can feel how someone else is feeling naturally, and this can be overwhelming at times. ISFJs are sensitive to the emotions of others and this can cause them to require time to themselves to recharge from everything. ISFJs care deeply about others and they feel this on a level that sometimes makes it difficult to really communicate.

ESFJs are often prone to HSPs traits, since they are so naturally in tune with the emotions of others. They often feel the emotions of those around them without even trying, and this can actually be overwhelming at times. The ESFJ can struggle to sift through what they are feeling and what someone close to them is experiencing for emotions. This hypersensitivity can definitely cause them to be HSPs, which sometimes means the ESFJ needs time to themselves to relax and let go of those emotions.

ISTPs aren’t as commonly seen as HSPs, since they aren’t very in touch with the emotions of others. They are more connected to facts and logic, and follow their head much more than their hearts. ISTPs do care about their loved ones and can be sensitive to their needs, they just don’t find it overwhelming and they rarely get emotional because of it. The ISTP HSP is likely to struggle with these feelings deeply, constantly trying to ignore their sensitivities and overcome them with logic.

ESTPs are less likely to be HSPs, since they are more drawn towards facts. While they do care about their loved ones and can be sensitive to their needs, it isn’t something that usually overwhelms them. Most HSPs are so in touch with the emotions of others and the world around them, that sometimes it can leave them feeling emotionally exhausted themselves. This isn’t something the ESTPs commonly have happen, and they are more likely to shut off if things get too overwhelming.

ISFPs can definitely be HSPs, since they feel things so deeply in their lives. They are connected to their inner emotions and filter everything through them. ISFPs can become highly sensitive to the pain of the world, sometimes feeling overwhelmed by the things they see. They can certainly be highly sensitive people, especially when they are constantly exposed to sadness and pain around them.

ESFPs can actually be prone to being HSPs, even if this isn’t always apparent to others. They have such deep emotions and big hearts, that sometimes this can be overwhelming for them. They might want to put on a positive and happy face in front of others, keeping their sadness inside so that it doesn’t bring others down. ESFPs can be extremely sensitive to the pain around them, and truly feel hurt when they witness this pain. They are likely to be the people who cry when they see animals hurting on TV, wanting to quickly change the channel.