Here’s How You Handle Being Nagged, Based on Your Personality Type 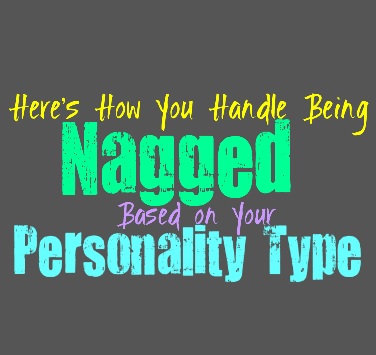 Here’s How You Handle Being Nagged, Based on Your Personality Type

Nobody enjoys being nagged, but some people can handle it much better than others. While some people respond by trying to shut it down, others might be great at blocking out what they are hearing entirely. Here is how you handle being nagged, based on your personality type.

INFJs can actually take being nagged rather harshly when it comes from someone they care about. They can often blame themselves, and have a hard time when they feel like they have done something wrong. The nagging often gets to them, even if the INFJ attempts to block it out and focus on something else. They have a tendency to internalize things, especially when someone is nagging them or telling them they are doing something wrong. INFJs simply don’t like feeling this overwhelming negativity, and can be truly sensitive to it.

ENFJs can have a hard time when they are being nagged by someone they care about, but their response is often to try and fix the problem. They do their best to please their loved ones, and work hard to try and make them happy. If someone is nagging the ENFJ they often want to mend the situation and make things right. If the nagging continues even through the ENFJs best efforts, they will ultimately become frustrated by the situation. They don’t like feeling like they aren’t being appreciated, especially when they are working hard to care for others.

INFPs definitely don’t appreciate being nagged, but they often try their best to just block it out. They have such rich inner minds that sometimes zoning others out can be something they find natural. INFPs can feel overwhelmed when someone is nagging and rarely does this ever inspire actual motivation. They don’t like feeling pushed to do something and prefer to have space to do their own thing and make their own choice sin life. For the INFP being nagged can weigh heavily on them, especially if it comes from someone they love.

ENFPs truly despise being nagged, especially by someone they care for. If someone they aren’t close to nags them they can often respond passive aggressively. They don’t really take well to this and are likely to find a way to remove themselves from the situation entirely. ENFPs can feel completely overwhelmed when someone nags them, and will want to find a way to tune this out. While they might try to ignore it, the situation can feel truly draining on them emotionally.

INTJs really don’t appreciate being nagged and will likely make this very clear. They aren’t afraid of telling people their limits and will let them know that they aren’t going to put up with this situation. INTJs also work hard to get things done and don’t need someone trying to nag them in order to motivate them forward. INTJs prefer to have space and distance in this type of situation, and would rather not be around someone who is constantly going to nag them about things they are more than capable of handling themselves.

ENTJs don’t have patience for being nagged and can actually become short tempered. They might snap on someone who continues to nag them and often become truly frustrated by this. ENTJs will try to make their feelings clear and will set boundaries so that people know where they are coming from. They simply want to have space to handle things themselves, and don’t need people nagging them or making them feel more overwhelmed by a situation. ENTJs are efficient people who work hard to get things done, and they certainly don’t need someone on their back about it.

INTPs really don’t like being nagged, and often will try to block this out completely. If someone continues to nag the INTP they might need to find out how to get away from this person. They don’t like being around people who don’t give them space and room to do what they want. INTPs can sometimes lack motivation, but having someone nag them only makes the situation worse. They can feel extremely frustrated by someone who continues to disrespect their boundaries, and will likely snap on this person and lose patience.

ENTPs really don’t appreciate being nagged, they prefer to have space to do their own thing. Someone constantly nagging the ENTP does not inspire them to get things done, instead it makes them feel more stagnant. ENTPs can be defiant people, which causes them to want to rebel against someone who incessantly nags them. They need to feel free to make their own choices, and even make their own mistakes in life. ENTPs will likely try to get away from someone who nags them, or come up with a way to shut them down.

ISTJs really don’t appreciate being nagged, but if it is by their boss they will often do their best to fix the problem. ISTJs will simply step up their game and try hard to ensure that they are living up to the expectations of their superiors. While they do work hard to make up for anything they are lacking, the ISTJ can become frustrated if this continues. Eventually they will speak up and make it clear that they are working hard, and that they don’t appreciate the nagging situation.

ESTJs are hardworking people who want to live up to their expectations, but at the same time they don’t appreciate being nagged. If their superior continues to nag them over something the ESTJ will often become frustrated with this situation. At first they will try to make things right and work hard to improve whatever they might be failing at. If they continue to get nagged by someone the ESTJ won’t be afraid of stepping up and pushing back a bit.

ISFJs can feel overwhelmed if they are nagged by someone they love, and will do their best to fix the problem. They want to always do their best and have a hard time not being seen as perfect. When the ISFJ is nagged by someone it can be taken rather personally, and leave them feeling like they haven’t been doing things right. ISFJs will eventually speak up if someone continues to nag them even though they are trying, but it often takes a while before they reach this breaking point.

ESFJs can become overwhelmed if they are nagged and might take this personally. They work hard to take care of others and don’t handle feeling like they are failing very well. ESFJs will do whatever they can to make the situation better, especially if the nagging comes from someone they love deeply. If the nagging is coming from someone they don’t feel close to, the ESFJ can actually become a bit short tempered and will make sure this person knows that they aren’t going to put up with it.

ISTPs can sometimes ignore the person who is nagging them, and will do their best to block it out completely. They really don’t like someone pushing their buttons in this way, and really value having space. ISTPs don’t like wasting their time and energy on someone who nags or pushed them in a negative direction. When they are being pushed by someone in this way they might try to get away from them, or in the very least set boundaries.

ESTPs definitely don’t like being nagged, but can react differently depending on who it is. If someone they love nags them they might try to defend themselves, or make a case for why they aren’t living up to this persons expectations. ESTPs try hard to make their loved ones happy, and they really don’t like feeling like they are failing at this. They will try to make things right, and might have end up taking this personally. ESTPs can become short tempered when some people nag them though, especially if they are at work and trying to get something done.

ISFPs really don’t like being nagged, and might internalize this situation. If someone they love continues to put them down or nag them, it likely hurts the ISFP deeply. They might not respond with much at first, but this will continue to eat away at them. They want to be someone that others love and appreciate, and don’t like feeling as if they are failing their loved ones. ISFPs strive to be there for others, but this feeling of nagging can cause them to distance themselves.

ESFPs don’t appreciate being nagged, and can often take this personally. They become hurt when someone they love nags them or looks down on them, and will have a hard time coping with this. They might try to make light of it at first, wanting to change the subject or deflect. When someone continues to nag the ESFP it likely hurts them deeply, but they will try to find a way to overcome this or make things right.