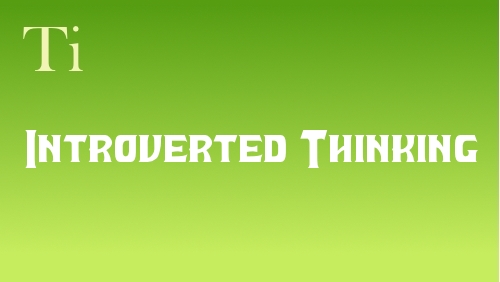 Introverted Thinking (Ti) is a function that is primarily used inward.

People with Introverted Thinking want the world to make sense in a logical manner. They form an internal framework of how the world works. It is constantly being modified and improved through life experience and experiments.

Introverted Thinking’s goal is to create a web of knowledge in which everything is interrelated.

For example, someone with introverted thinking can find out how a car and all its parts work by relating it to some other system, such as a computer.

They have the ability to find commonalities in seemingly unrelated things.

Introverted Thinking is also great at troubleshooting. Someone with Ti can analyze something, figure out where the problem areas are, and fix them rather quickly.

Users of Introverted Thinking also strive for efficiency. If something isn’t working well, they can become very frustrated. They have trouble working for bosses that they don’t believe are doing their job well.

People with Introverted Thinking can be seen as wanting to do things that are “the most effective for the least amount of work.” Some people may see this as laziness, however, it’s a form of perfectionism most Ti users have.

Ti users tend to be better in a reactive environment; somewhere where their skills can be called upon to “Save the day.” Ti users can create their own systems as well, but they are much better suited for improving an already working, but somewhat dysfunctional system.

Introverted Thinking has a desire for truth.

Someone with Introverted Thinking may take a while to fully understand a concept. This is because they want to know all the components and how everything works together. A Ti user would not be satisfied with someone saying, “this is the gas pedal, you press it to go.” A Ti user would want to know, what happens when you push it, what is the pedal connected to, how does it interact with the engine, etc.

A user with Extraverted Thinking may not need this much clarification.

However, once a Ti user figures out the whole system, everything clicks. They can see how the car and motor works, and how it all fits together. They have created a map and an internal framework, which could be applied to understanding how engines in other machines work. Pieces of this framework could also be used to understand seemingly unrelated concepts, like how a plumbing system works, or how computer programming languages interact with hardware.

Introverted Thinking wants to create a holistic understanding of the world. Maybe people with Ti appear to others to always be taking “short-cuts” and getting away with it. This may frustrate others or bosses that don’t understand. But in reality, the Ti user has spent a large amount of time and energy figuring out these systems beforehand, so that they are able to see what parts are truly necessary, and which parts can be skipped or eliminated.

Problems can occur with Introverted Thinking when the person does not take enough clues from their external environment into consideration.

Ti can be very stubborn and its users tend to believe they are always right. While they usually are, there are times when they might ignore facts and just revert to thinking about what they already know. This can be very unhealthy and lead to ways of thinking that are not very productive and are possibly detrimental.

A Ti user would be wise to make sure what they are analyzing is matching up with what is being observed in the external world. INTPs and ENTPs should take their Extraverted Intuition into play to see multiple angles and possibilities. ISTPs and ESTPs should use Extraverted Sensing to observe the current environment and use facts and data that they have gathered.