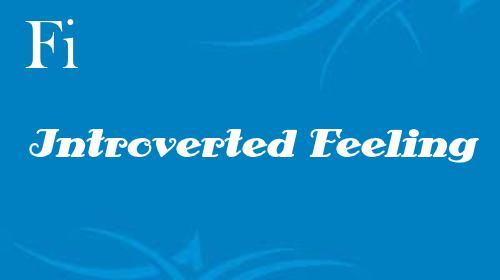 People with Introverted Feeling tend to be on a quest to figure out who they are and what they want out of life. Ideally, they would like everything they do to be in congruence with their personal believes. They want to live a life as true to themselves as possible.

The Fi user also wants to impact the world around them. They have a desire to express themselves and make an impact.

Introverted Feeling is constantly taking in the world around them. They filter it out through a lens of “good/bad” or “this is me/this isn’t me.” An introverted feeler is very self aware of who they are and their place in the world.

A problem with Introverted Feeling is that it can hinder personal growth. Fi can shut down new experiences that go against who they are as a person. Instead of doing something and taking the time to assess the situation later, they may become stubborn and refuse to try new experiences.

An Fi user would be wise to develop their Extraverted Intuition or Extraverted Sensing to allow them to just let go and experience the world without preconceived judgment. Doing this will help paint a more accurate picture of the outside world, as well as allow the user to discover more about themselves that they might not have known before.

Introverted Feeling also develops close attachment to people, things, and places. Fi takes a considerable amount of time to form these bonds, but each day they grow stronger. Fe typically forms bonds much quicker, but the emotions do not tend to run as deep as Fi.