What Qualities Do You Idolize in Others, Based on Your Personality Type 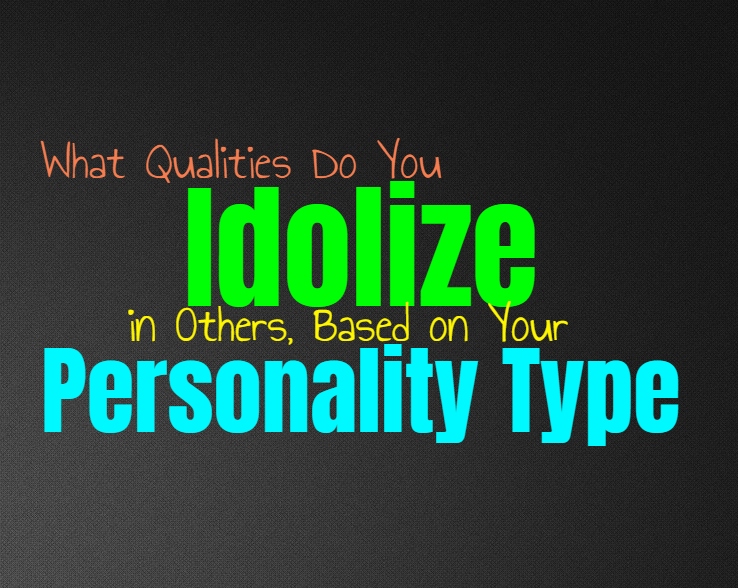 What Qualities Do You Idolize in Others, Based on Your Personality Type

We all have certain traits we aspire to, but there are other qualities which we completely idolize when seen in others. Sometimes these are traits we simply admire, other times they are ones we don’t think we could ever adapt ourselves. Here are the qualities you often idolize in others, based on your personality type.

INFJs often idolize people who possess immense inner and even outer strength. People who are capable of overcoming hardships while remaining true to themselves and their loved ones. INFJs often find themselves idolizing people who know how to stand their ground with what they believe in, someone who has a strength in their convictions and are capable of telling people off when it is the right thing to do. INFJs also have this tendency to admire people who aren’t afraid of taking risks, people will who can go after what they want even when it feels a bit frightening to them.

ENFJs often idolize people who aren’t afraid of taking risks in order to obtain what they want in life. They often find themselves admiring those who can take a few chances and who follow their passions no matter what. They have a deep respect for people who are capable of following their own path, while still caring for their loved ones and maintaining a strong sense of inner morals. ENFJs value being able to take care of others and do so much to make their loved ones happy, and so this remains something that they idolize in others as well.

INFPs are sensitive and caring people, but they tend to idolize those who possess a great deal of strength and conviction. People are are capable of commanding a room and making others both love and respect them, will be truly admirable to the INFP. They might not always be great at taking charge, but this is often a quality they idolize in others INFPs enjoy this quality of strength, but only when it is accompanied with a sense of consideration and compassion towards others.

ENFPs might not easily idolize others unless they see some sort of deeper quality which they adore. For ENFPs it is often about the specific person and whether or not they possess a certain amount of passion. ENFPs might find it hard to look up to most people and so it is rare for them to really feel inspired by others. What they do often adore and idolize in others, is someone who is both strong and patient. They don’t always have patience themselves and don’t have much respect for people who are incapable of giving others a certain level of respect and consideration.

INTJs rarely find themselves idolizing other people, but when they do it is almost always tied to their mind somehow. INTJs love knowledge and have immense respect for people who have unique and truly incredible minds. When someone is highly intelligent and capable of coming up with useful ideas and solutions, the INTJ develops a powerful respect for them. They don’t like people who are wishy washy or incapable of critical thinking. For the INTJ the more admirable qualities come from people who have truly complex and impressive intellects.

ENTJs often idolize people who are strong-willed and powerful, and who use their minds to get things done. They truly look up to people who are capable of overcoming their fears in order to accomplish their goals. People who are are both intelligent and highly capable people, are likely to gain the ENTJs respect. When someone climbs to the top with focus, and sheer will, the ENTJ is likely to idolize these qualities quite a bit. While it is difficult for them to find many people they truly idolize, it almost always comes from someone who is both strong and intelligent.

INTPs don’t often idolize or admire people, but when they do it almost always connected to their intellect. They admire people who are capable of using their minds to achieve great things, and those who are willing to push themselves in order to do this. INTPs also find themselves drawn to people who are capable of thinking outside of the box, instead of simply listening to what everyone else says is correct. INTPs often admire and even idolize the qualities in people who think for themselves and do their best to uncover the truth in things.

ENTPs often idolize qualities like creativity and intelligence, but only when they are found in abundance. When someone is truly intelligent and uses their mind to accomplish things in life, the ENTP truly looks up to this. People are capable of thinking for themselves instead of just following the masses, are often rare and truly admirable to the ENTP. They are drawn to those who aren’t afraid of standing out on their own in pursuit of the truth.

ISTJs often find themselves idolize people with strength of character and intelligent minds. People who are capable of using this intelligence in order to get things done and accomplish their goals, are likely to gain immense respect from the ISTJ. They only look up to people who are capable of getting things done, and who don’t make excuses when life does not go as expected. They admire those who are strong-willed and who do whatever they must in order to finish their tasks.

ESTJs often find themselves idolizing people who possess power and who also have strength of character. They don’t simply follow those in power, instead they want to be able to look up to someone who uses this power to make a difference and do what is right. ESTJs actually do have a sense of inner morals, and so they admire those who possess this as well. While ESTJs might possess a different set of morals than is typical, they still believe in trying to do what is right for others in order to protect them.

ESFJs often find themselves idolizing people who are both caring and passionate. They are drawn to those who possess unique talents and who aren’t afraid of showing these skills to the world. Someone who has a kind heart but who also have a deeply passionate soul, is going to draw the ESFJ in and leave them feeling completely in awe of their abilities. While they are personally caring and often sacrificing people, they find themselves admiring people who can live their own lives while still caring those around them.

ISTPs rarely find themselves idolizing people, but when they do have certain qualities they admire it is often rare. ISTPs find themselves admiring people who are capable of making their own choices, without upsetting those around them. People who can be both dependable and have a sense of freedom in their lives. They admire people who think for themselves without constantly turning to everyone else in order to figure out the answers.

ESTPs find themselves idolizing people who are confident in themselves, but who are always willing to go that extra mile to get things done. They are drawn to those who are strong and who aren’t afraid of standing up for their beliefs. ESTPs also idolize people who are intelligent and who don’t simply believe everything they hear or read. They don’t like people who simply accept the first answer they are given, since leads to plenty of ignorant people.

ISFPs often idolize people who are strong but who continue to stand up for their beliefs. They turn to those who accomplish their goals without constantly floundering or making foolish mistakes. ISFPs also admire people who can stand up for themselves, without being cruel or hurtful about it. Those who stand strong and have an ability to get things done without constantly falling apart, are truly admirable for the ISFP.

ESFPs often find themselves idolizing people who are strong, and who are capable of overcoming just about anything which stands in their way. People who never quit even when they are struggling, are truly admirable to the ESFP. They are naturally passionate and adventurous people, but they sometimes find it difficult to overcome their desire to bounce around. People are are capable of getting things done and still maintain a consideration for those around them, and definitely worthy of being idolized to the ESFP.