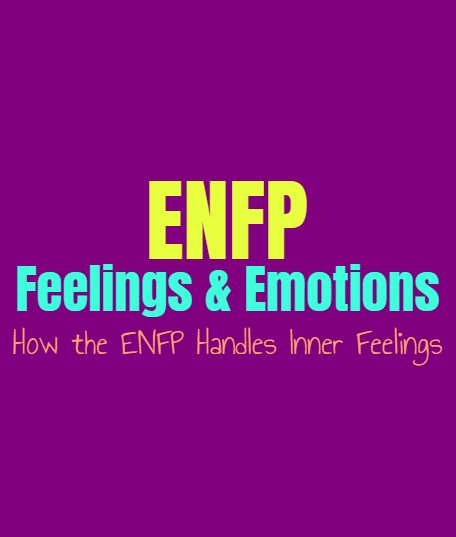 For the ENFP their inner emotions are deeply important and something they value instead of neglect. While some personality types prefer to bury their emotions, this isn’t something which feels natural or right for most ENFPs. They are more comfortable being open and sincere, and dislike covering things up for the sake of others. ENFPs believe in expressing themselves and standing up for the things they believe in, and value their sense of inner morals because of this.

They Believe in Sincerity

ENFPs believe in being honest and don’t like covering up their feelings simply because someone wants them to. They don’t feel comfortable burying their emotions and trying to run from them, since they are such a big part of who they are. ENFPs are logical people as well, and enjoy researching and learning about new things. While they care about and value logic and reason, they focus a lot on their inner emotions. For the ENFP addressing the things they are feeling is deeply important, and so they don’t like hiding from these things.

ENFPs want to understand themselves, and this is why they work hard to build this inner confidence. In order to go after what they want and follow their dreams, they need to take the time to actually understand what they are feeling. For the ENFP processing these emotions is what helps them to understand what they are truly experiencing inside. They value their own wants and emotions, and so this is why even though they are extroverts sometimes the ENFP needs time to themselves. Diving into these feelings and learning to understand them better helps the ENFP get a better realization of what they want from life. For them following these dreams is really something which is meaningful and important to their happiness.

They Have Strong Morals

ENFPs have strong inner morals which comes from their introverted feeling function. For the ENFP holding onto these inner morals and values is an important part of who they are. These are deeply tied to their emotions, but for the ENFP this isn’t something fleeting. It comes from these firm emotions and beliefs which are rooted in who the ENFP truly is. They come from spending time inside of their own minds, and their complex inner imaginations. ENFPs develop these morals more and more over time, and for them having this challenged is very troubling. They don’t like when people try to come against these beliefs or make the ENFP feel badly about them.

For the ENFP it is their own internal emotions which are important to them, coming from their auxiliary function Fi. While they do care about others and their emotions, they don’t necessarily process them the same as a strong Fe user would be. While they care about their loved ones, they don’t process or respond to outward emotions the same way. Instead ENFPs make choices which are rooted from inside and based on what they think and feel and are not dependent on the emotions of others. For the ENFP developing this strong sense of self-awareness is what helps them become confident people as they mature.

This Doesn’t Make Them Overly Emotional

ENFPs are actually more capable of coping with and handling their own emotions because they are comfortable with them. They don’t neglect these feelings or bury them inside for fear of experiencing them. There are many people who don’t feel at ease with emotions and so instead of trying to understand them, they push them deep inside. For the ENFP this isn’t natural and trying to stifle their own emotions is going to leave them feeling drained. They have a hard time when they are in situations where people won’t accept their emotions or try to force the ENFP to keep these things to themselves. ENFPs need a sense of openness in their lives which gives them a chance to really be themselves without feeling restrained.

They want to be sincere with those around them and because of this sense of understanding the ENFP is often more equipped to handle emotions. People might peg them as emotional people but this isn’t the case, instead they can often control them better. They aren’t like to have outbursts all that often, instead they allow themselves to express things and this helps them release those feelings slowly instead of all at once. Of course under times of extreme stress this might be different, but normal emotions aren’t going to overwhelmed the ENFP or cause them to overreact. This is why stereotypes really aren’t good to rely on, since many can claim that ENFPs are overly emotional people when this really is not the case. Instead they are simply people who value their emotions and listen to them, instead of neglecting these inner feelings. ENFPs are equipped to handle their feelings because they don’t ignore them or push them aside for a fear of being vulnerable or feeling too much. They do have moments where they can appear this way, but that doesn’t mean ENFPs don’t care about being logical. They simply take their feelings and morals into account more than they do basic logic and reason. This balance for the ENFP is important and depends on the situation and what their ultimate goal is.