The Ways in Which Shyness Affects You, Based on Your Personality Type 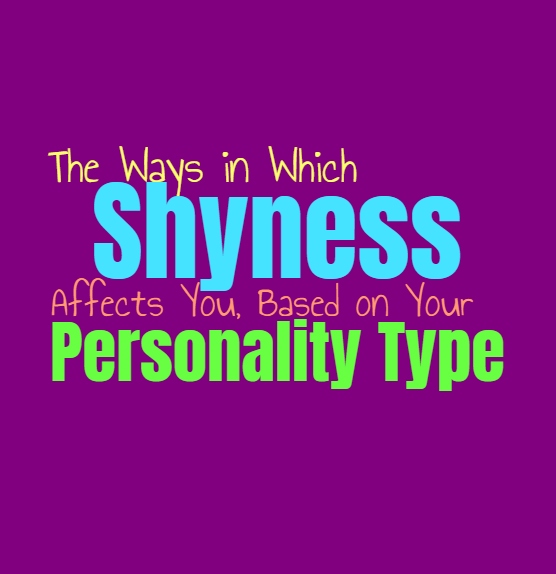 The Ways in Which Shyness Affects You, Based on Your Personality Type

Shyness is something which introverts and extroverts can both experience, and isn’t simply tied to those who keep to themselves or are drained by too much interaction. There are plenty of shy extroverts, or outgoing introverts, and so these qualities are not mutually exclusive. Some people are affected differently by being shy though, and this can be tied to their personality type. Here is how shyness affects you, based on your personality type.

INFJs can definitely be bothered by feeling shy, since they want to be able to connect with people. Sometimes they can feel like their own shyness might hold them back in life, and prevent them from seeking out certain experiences. INFJs might be introverted, but they still crave connection and want to feel close to people. They need time to themselves to recharge, but without having people in their loved who they trust and rely on the INFJ will feel alienated. If they are overly shy and feel this hold them back, it can certainly be something which bothers the INFJ.

ENFJs are social and often interacting people, and so if they feel shy it can be something which holds them back. ENFJs who are a bit shy are often this way because they are nervous of how people will respond or react to them. They want to be liked by others, and so this is certainly something which can be difficult for them. If their shyness alienates them from others it is something which will greatly affect the ENFJ, since they desire closeness and connection with those around them.

INFPs do sometimes alienate themselves because they prefer having time alone, but that doesn’t mean they are normally shy people. Most of the time INFPs enjoy being social and connecting with others, and can be rather outgoing in the right settings. The shy INFP can sometimes struggle with feeling distanced from others and might have a hard time finding people to open up to. They might find it difficult to search for companionship, instead they become inclined to wait for it to come to them.

For the ENFP to be truly shy it is certainly a challenging thing for them to go through, since they crave being able to connect with others. They are naturally social creatures, and so most ENFPs will do their best to overcome these feelings of shyness. They might even use the fact that they are shy to their advantage, and this can be seen as an endearing and lovable trait. The shy ENFP still wants to connect with people and so they try not to let this stop them.

Most of the time INTJs focus on doing their own thing and don’t need constant interaction to be happy with their lives. The only time being shy might negatively affect the INTJ, is when it prevents them from getting things done and moving forward in their lives. They will likely work to overcome this so that it doesn’t prevent them from being efficient and building the lifestyle which they want in the future. Most of the time INTJs don’t really care about being outgoing or expressive, since they do enjoy keeping to themselves.

ENTJs who are shy certainly won’t enjoy experiencing this, since they care about how they connect with and are perceived by others. ENTJs will most likely try to overcome this shyness, or at least find ways of working around it. They don’t want to allow something like this to become a weakness in their lives, which prevents them from accomplishing their goals. The shy ENTJs will take this as another challenge and hurdle which they need to push through/

The shy INTP likely wants to find ways to work around their shyness so that they can move forward and accomplish the things they want. INTPs don’t really need a lot of time interacting with others, and most of the time they prefer to be alone. They can usually deal with being shy simply by allowing the right people to break down these barriers. When it comes to feeling insecure about their shyness, the INTP will try to research means of overcoming this challenge and moving forward.

ENTPs are normally outgoing people, since being social and interacting with others is important to them. The shy ENTP often struggles with this, and wants to find ways to overcome it. They don’t like feeling shy, and often take this as a challenge they need to overcome. For the ENTP being able to connect with others and open themselves up to new experience is truly important. They don’t mind keeping to themselves sometimes, but for them it is important to have a balance.

ISTJs don’t really find that being shy affects them that much in life, since they simply focus on getting things done. They are very driven people who keep to themselves often anyways, and become drained with too much social interaction. For the ISTJ being shy really only affects them in certain areas of their lives, and in these situations they will likely do whatever it takes to push past those feelings in order to get things done.

ESTJs are naturally social people who want to be able to fit into their community, and so shyness isn’t something they really appreciate having to deal with. If the ESTJ feels naturally shy they will likely try and push past this and find a way to overcome it. They are competitive people who take things like this as a challenge, especially when it comes to their shyness preventing them from moving forward or making connections.

ISFJs are often private people who enjoy time to themselves, but they also care about being able to connect with others. The shy ISFJ will do their best to remain close to people they trust, in hopes that those people can shield them from uncomfortable situations. They want to try and avoid putting themselves into scenarios where their shyness can feel overwhelming, and so they stick to things and people they know.

ESFJs who experience shyness can feel a bit frustrated by this, since they care about connecting with others. They are normally social people who need to interact with others and for them this is important. The shy ESFJ might try and find people they know they can connect with, or wait for certain people to approach them. When this occurs they often stick to these connections and try not to expose themselves to too much change. Most of the time ESFJs can try to ignore their feelings of shyness, since being close to people is far more important for them.

ISTPs who experience shyness do often try to overcome these feelings, since they like taking on the challenge. They don’t simply avoid things which make them uncomfortable, and often prefer to push themselves. At the same time ISTPs don’t need constant social interaction, instead they actually prefer to have time to themselves. ISTPs become drained by being around others too much, and so shyness isn’t necessarily holding them back from much.

ESTPs who experience shyness often do their best to avoid letting this overtake them, instead they wait for the right people to approach a friendship with them. ESTPs don’t want people to realize just how shy they are, since for them it is important to have connections and interact with others. They enjoy experiencing new things and don’t want being shy to hold them back from diving into the things they want.

ISFPs who are shy often don’t mind having time to themselves, so it doesn’t necessarily hold them back. As long as the ISFP has people they can connect with who understand and appreciate them, they don’t mind feeling a bit shy. They often try to hang onto this person and their connection, since this can help them feel more comfortable around others and help ease their shyness a bit.

For the ESFP being shy is certainly something which would be difficult, since they care deeply about connecting with others. They are social people who like to be able to interact and get to know new people. For them being shy would certainly be a difficult thing to deal with, and they would likely need to find ways to overcome this. Sometimes it helps if they connect with people who make them feel more comfortable, so that they can open up a bit more around new people.