Are You Likely to Throw a Big Wedding, According to Your Personality Type 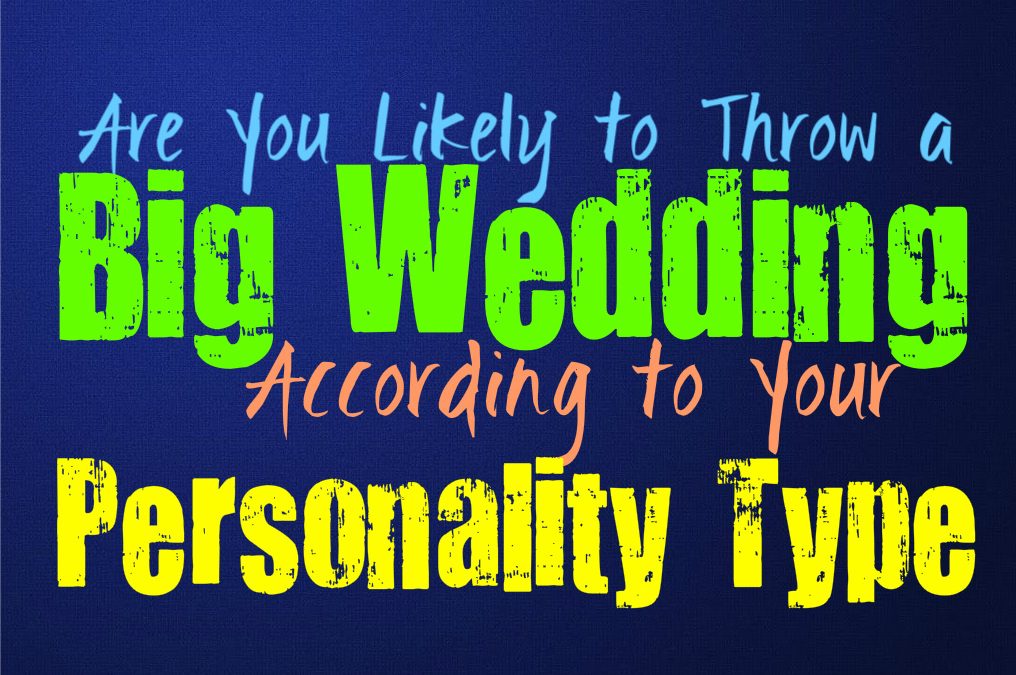 Are You Likely to Throw a Big Wedding, According to Your Personality Type

Many people dream of having a really big wedding, while others are better suited for an intimate occasion. Having a big wedding seems to be the ideal fantasy, but for a lot of people this really isn’t the best way to have a truly happy day. Here is how likely you are to be drawn to a big wedding, based on your personality type.

INFJs aren’t often drawn to the idea of having a big wedding, unless someone they love is pushing them to do this. INFJs can be susceptible to their loved ones desires, and so they might plan a big wedding in order to make someone else happy. Most of the time INFJs would be more intrigued by something intimate and personal, and less over the top. They do find themselves drawn to some lavish things from time to time, but that doesn’t mean they would want a more dramatic wedding. INFJs would want this personal day to really convey a deeper meaning and express to their loved ones how important this commitment is to them.

ENFJs actually might be inclined to throw a big wedding in order to impress their loved ones. They want people to join them and be happy for this special day, and so the ENFJ might get a little carried away sometimes. For the ENFJ there are certain special occasions and events which should be truly marked and even be a bit over the top because of this. For them their wedding day is often important and sometimes they want to really cherish and make it sincerely special for everyone who is sharing in this with them.

INFPs aren’t often drawn to the idea of having a big wedding, but that doesn’t mean they won’t want something truly special and maybe a bit elaborate in some ways. They might not want to invite a lot of people, and will likely want to include only those they are close to. For the INFP this day shouldn’t be about showing off, instead they just want to share with the people they care for the most. While they might not have a large group of people at their wedding, some INFPs can be drawn to lavish things and so their wedding won’t necessarily be simple.

ENFPs might enjoy the idea of having a big wedding and really going over the top with everything. They want this special day to really be everything they dreamed of, and for most ENFPs this means not holding back at all. ENFPs are passionate people who go after what they want in life, and this include their love life. When they find someone they want to spend the rest of their life with, the ENFP is likely to enjoy the idea of celebrating this in a big way. They often want a big wedding to really show everyone how they are feeling inside, and make it something sincerely special.

INTJs aren’t likely to enjoy the thought of having a wedding with a lot of people attending. For them this type of special day should only include the people who are going to be happy for them and enjoy supporting their wedding. INTJs might not enjoy the idea of having a lot of people at their wedding, but that doesn’t mean they want to be a boring experience for those attending. INTJs might not be over the top or dramatic with their plans, but they are often drawn to things that are classy and maybe a bit expensive when it comes to something like their wedding day.

ENTJs might enjoy the idea of having a big wedding, in a way that really shows off this special day. They are committed people who take the idea of marriage seriously, and so they often want to make the most of it. ENTJs sometimes enjoy a big party, especially one that is marking such a serious and important moment for them. For the ENTJ a big wedding where they can really showcase everything that their partner means to them, is often something they are drawn to.

INTPs aren’t often drawn to the idea of throwing a big wedding, and so they might go more with what their partner wants. For them having to throw an over the top party can seem a bit too much at times. INTPs might enjoy the idea of sharing in this special day, but they often want to include a smaller group of people. They are likely to be drawn to something a bit more classic and simple, instead of something which seems a bit forced and even insincere. For the INTP the most important thing in their relationships is being sincere and so they don’t want their wedding to be something that is the opposite of this.

ENTPs might enjoy the idea of having a more lavish wedding and a celebration which shows how happy they truly are. For them it isn’t about showing off, instead it is about sharing in this special day and making it truly memorable. ENTPs don’t necessarily want to have a large group of people at their wedding, but that doesn’t mean they need it to be understated. ENTPs might enjoy a wedding with a bit more flash and excitement to it, especially if this is something their partner wants.

ISTJs aren’t really over the top people, but that doesn’t mean they don’t enjoy wedding with a bit more lavishness to it. For the ISTJ it often comes down to what their partner wants, but in some situations they might dream of having a big wedding. They take their commitments very seriously, and so to the ISTJ their wedding day is truly a big deal. They value having someone to share their lives with and so they often do want to make this day something special where others can share in their joy.

ESTJs can be frugal people, but at the same time they might enjoy the idea of having a big wedding. For ESTJs it might be about finding ways to make things a bit more affordable, while still not having to compromise what they want for this special day. Even though they take this commitment seriously and often dream about finding the person they want to share their lives with, this doesn’t change the fact that they are practical people. ESTJs will want to find a way to have the big wedding they want, while being able to afford this.

ISFJs might enjoy the idea of having a more lavish wedding, but that doesn’t mean they want to make things too over the top. ISFJs often dream of this day and dream about sharing it with the people they love the most. For the ISFJ sometimes they can feel pressured into having a bigger wedding than they want, especially if someone they love wants this for them. They will often try to make others happy even on this day which should be more focused on the ISFJ and their partner.

ESFJs might dream about having a truly special wedding, one where they can show everyone how happy they truly are. Whether they want something more simple and classic, or something truly lavish and over the top, ESFJs value their wedding day and truly want to make it something special. They are likely to put a lot of time and energy into their wedding, and will do their best to make everyone happy who is included. ESFJs sometimes feel pressured to have a bigger wedding if someone close to them wants this for them, and they will likely have a hard time turned away from this.

ISTPs might not be all that drawn to a big wedding, and might even leave the planning up to what their future spouse wants. ISTPs don’t really like being over the top with something that should be more focused on sincerity. They also have a hard time with the idea of inviting people who really aren’t that close to them. Most ISTPs don’t enjoy having to plan a lavish wedding to express their feelings, and would rather just move forward with their commitment.

ESTPs can often be swayed by what their partner wants and will find themselves trying to do what will make them happy. If the person they are engaged to wants something a bit over the top, then they will likely to be excited about this. If their fiancé wants something a bit more understated, the ESTP will do what they can to give them this. They might enjoy the idea of having a big party which really expresses their joy, but ESTPs do want to make the loved one happy.

ISFPs might enjoy the idea of having a truly beautiful and lavish wedding, but that doesn’t mean they want a lot of people there. The feeling of having people who aren’t sincerely there to celebrate their special day, is likely to stress the ISFP out immensely. They want everyone involved to be truly happy for them, and to share in something that means a lot. For the ISFP their wedding day should be beautiful and truly express the shared love between themselves and their partner.

ESFPS are often drawn to the idea of having a big wedding, especially one with an excellent party. ESFPs are often great at throwing parties and putting together something where everyone is going to have a great time. They want their wedding day to be truly special and something that others will remember for a long time to come. They don’t like holding back simply because it seems more practical, especially with a day as important as their wedding.