The Job Interview Struggles for Each Personality Type 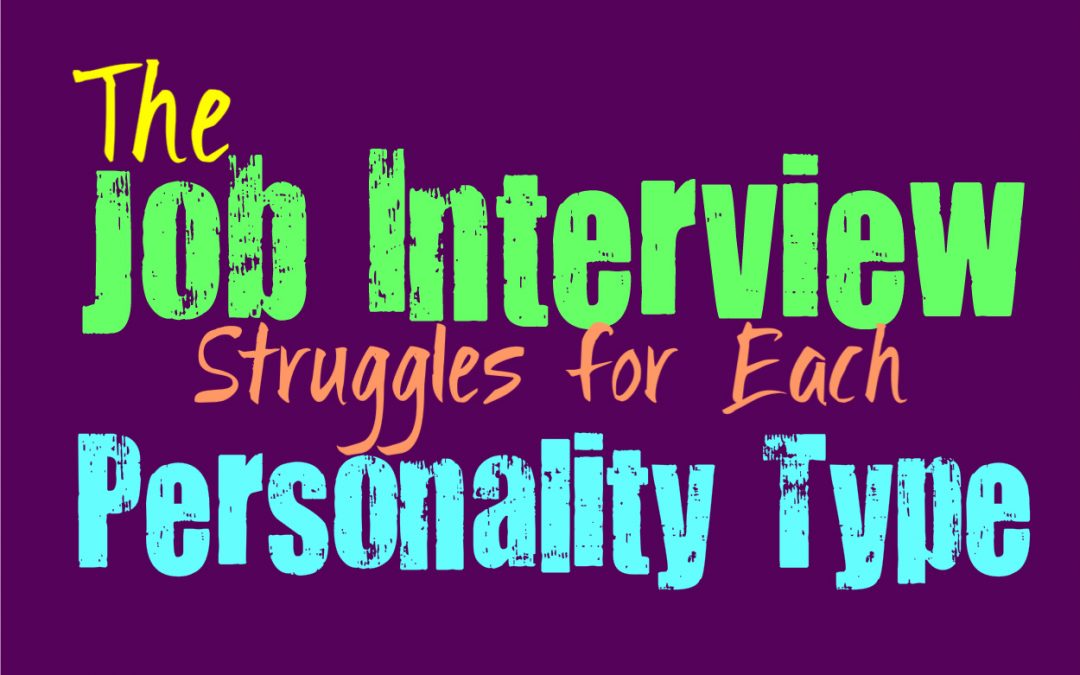 The Job Interview Struggles for Each Personality Type

Job interviews can be difficult for most of us, there is a certain level of anxiety to them which makes it challenging to really remain confident in your abilities. Enduring a job interview is something we all must do, and ultimately we want it to go well. Here are the struggles each personality type deals with at job interviews and what they bring to the table which helps them.

INFJs can sometimes struggle with having to promote themselves in a job interview. The feeling of having to sell themselves like they are under some sort of microscope for others to judge, can feel a bit overwhelming and distasteful. INFJs are capable of being social people who can often community rather well, and this is certainly something that can help them in an interview. It is best for the INFJ to prepare beforehand and do their best to get an idea of how they want to respond and what might occur during the interview. The pressure of the situation and the fear of failing is often the biggest struggle for the INFJ in a job interview.

ENFJs are often outgoing and social people, which is something that truly helps them in job interviews. ENFJs are good at adapting and finding out what they need to say in order to perform to the best of their abilities. For them interviews often go fairly well, especially since they do their best to prepare and ensure that they can handle the pressure. The biggest struggle for the ENFJ is being judged and feeling like they might not be good enough. They can feel a bit anxious about the idea of failing and not getting the job, and this is something that does weigh on them.

For the INFP one of the hardest aspects of a job interview is feeling like they need to sell themselves to someone else. The feeling of being under a microscope and having someone judge them in this way, is a bit overwhelming and not something they are all that comfortable with. INFPs prefer to let their actions speak for them, and enjoy when their skills are just naturally recognized. Having to push themselves onto someone in an interview, can feel both draining and insincere. INFPs are honest people and can be rather friendly and likable, and these are the traits which help them in job interviews.

ENFPs are outgoing and often charismatic people, which is something that often helps them in job interviews. They are capable of selling themselves and of expressing their knowledge with a sense of confidence. ENFPs know what they are comfortable with and this certainly helps them come across rather well in a job interview. They are social people who can often draw people in with their natural personality. For ENFPs job interviews are often something they can handle fairly well, the only struggle they face is feeling a sense of pressure to succeed.

INTJs are often confident people who are rather sure of their abilities, and this is something which can truly help them in job interviews. They know how to communicate clearly and precisely, and rarely do they appear nervous in these situations. Their ability to be assertive is definitely useful when applying for a job, and is often something people recognize immediately. INTJs simply struggle with the pressures of the situation since they are perfectionists and might overthink everything. This doesn’t mean it will hold them back, it simply is something that can be stressful for them at times.  Sometimes the INTJs sternness and focus can be something that comes across as a bit cold, and this can sometimes be a struggle in interviews as well.

ENTJs have a sense of confidence and strength which often resonates well in job interviews. They are also rather outgoing people and have a way of being able to charm others when the situation calls for it. ENTJs can be a bit larger than life, but this is something that helps them come off as confident and assertive in most interviews. Knowing how to behave in these situations is a skill most ENTJs possess, and so it does give them a leg up on their competition in most situations. Their biggest struggles is that they put a lot of pressure on themselves and can be a bit intense at times.

For the INTP job interviews are often horrible and stressful things, almost like dealing with making phone calls. They really don’t enjoy having to sell themselves in a stressful environment where their every word is being scrutinized. Even though the INTP usually possesses the skills and more for the job, they are often afraid that how they express themselves just won’t be enough. They aren’t always the most sociable people and sometimes they can come off as a bit cold and precise. This is something they worry about with job interviews and often feel anxious about the entire situation.

ENTPs are outgoing and charismatic people, which is often helpful in job interviews. They enjoy being able to challenge themselves and so a job interview is often just another chance to prove their abilities. ENTPs often enjoy being able to put themselves in these situations in order to see what they are made of. They are often very good at handling job interviews with a sense of enthusiasm and charm, which are both qualities that help them immensely in these situations. The biggest struggle for the ENTP might be reigning it in a bit when they are excited about something.

ISTJs are rather direct people who are capable of holding their own in interviews. They do their best to improve their skills and prepare for just about every situation. When it comes to an interview the ISTJ will prepare themselves so that they are sure they can handle it fairly well. Where they might struggle is with expressing themselves in a more outgoing manner, since they can be somewhat direct and aren’t naturally expressive people. Their perfectionist nature can put a lot of pressure on the ISTJ to succeed in these situations, which is certainly challenging for them.

ESTJs are confident people with rather assertive personalities, which is something that helps them in job interviews. They are good at conveying their abilities with a sense of confidence, which makes it rather believable for others. ESTJs go after what they want and are not afraid of pushing hard to get it. For them a job interview is often something they can handle without feeling nervous or uneasy. They are confident in their abilities and realize that they can do whatever they set their minds to. They are definitely perfectionists though, and this can be something which causes them to feeling rather overwhelmed if they don’t do as well as they would hope.

ISFJs are capable of being rather social people and do their best to perform at just about everything they do. When it comes to job interviews they often do fairly well and are good at conveying a sense of honesty and showing their strengths often comes from their resume. ISFJs are hardworking people and oftentimes their references do a great deal of showing how capable they are. Where they struggle is simply with the process, since ISFJs put a lot of pressure on themselves to succeed.

ESFJs are known for being great in job interviews since they are outgoing and friendly people. They are good at expressing their abilities and know how to get along with people in just about any situation. Their sense of empathy helps the ESFJ get a sense of how to behave in different job interviews, and helps them to connect with the interviewer. Where ESFJs struggle is simply with feeling the pressure of wanting to succeed, since they are definitely perfectionists and can make things hard on themselves sometimes.

ISTPs can be rather charming people and they often know how to communicate well with others. For them the process of job interviews can be draining though, since they need to push themselves to really be more outgoing and even perform a bit. ISTPs are good at selling things, and so they will do their best to sell their own abilities in a job interview. For the ISTP these situations can be draining though, especially if they are going out for a job that isn’t necessarily right for them.

ESTPs are charismatic and outgoing people, which certainly helps them in most job interviews. They often know how to talk about themselves and their skills with great ease. ESTPs can express their abilities to the interview rather clearly, and they know how to be serious but also friendly. They often do fairly well in job interviews, but they can be a lot more nervous inside than they express outwardly. ESTPs simply feel a lot of pressure in these situations because they dislike feeling is though they have failed or been disappointed.

ISFPs can feel a bit overwhelmed with most job interviews, since the pressure can be a bit draining for them. They are friendly people who often come off as rather kind and capable. In interviews most ISFPs are seen as someone that the interview would want to hire, mostly because they give off a rather honest vibe. While this is something that aids the ISFP, they often dislike the job interviews and having to express themselves in a way that might feel a bit strict for their liking.

ESFPs are outgoing and friendly people which helps them immensely in job interviews. While they can be somewhat scattered people who jump from one thing to the next, they are also truly good at getting away with this. In most interviews the ESFPs charm shines through and they are often able to express themselves in a way that is truly beneficial. They know how to connect with people and will show a sense of confidence which can go a long way.