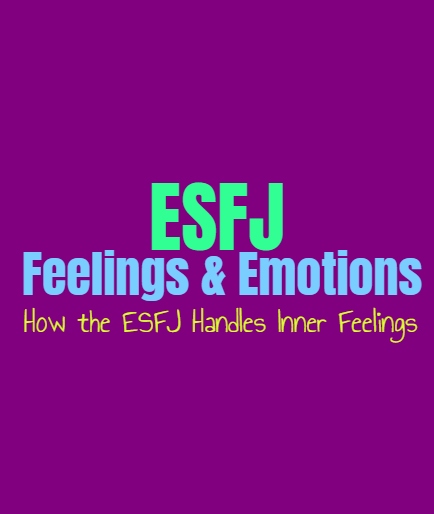 Emotions are important to everyone, each person simply processes them differently. For some it is best to focus on their own inner voice, to others it is all about the emotional reactions of those around them. It is important to take a deeper look at each individual before assuming we understand their own emotional processes, but it is helpful to understand each personality type better as well. This is the first step in getting closer to understanding someone, but we should also look closer at the individual as well. For ESFJs emotions are deeply important and a big part of their lives, but it isn’t always as simple as it seems for them.

The dominant function of the ESFJ is their Fe (extraverted feeling) which does focus strongly on emotions. This focuses more on the emotions of others, and much less on the ESFJs internal feelings. Instead the ESFJ spends a lot of time and energy tending to the needs of those around them. They care about others and want to do whatever they must to make them happy and feel comforted by the ESFJs presence. They are sensitive to the emotions and feelings of people, and can often get a strong sense of what they are going through without them having to say anything.

The ESFJs sense of empathy can certainly be an impressive skill, but it can also be draining after a while. They spend so much time focused on the emotions of others, that they do have a tendency to neglect their own needs and feelings. ESFJs don’t want to focus inward most of the time, and feel more comfortable focusing on the emotions of their loved ones. Instead of looking inside to make choices, they look outwardly. They want to be sure that their choices and actions will positively affect those they love, and so they often make choices based on this. This doesn’t mean ESFJs are incapable of logical decisions, they just want to always consider the feelings of those around them. They can often see the logical path, but this doesn’t mean they won’t try to sugarcoat the situation a bit. Instead of following the cold hard facts the ESFJ wants to be sure they are taking care of their loved ones and their feelings. They don’t want their choices to be upsetting or hurt someone, and so the ESFJ can often hold back because of this. This extraverted feeling is often what guides the ESFJ and does help them make a lot of their big decisions in life. This doesn’t make the ESFJ constantly search for validation from the outside world in the way some might think, instead it makes them focused on ensuring the happiness of those they love.

Their Own Inner Emotions

ESFJs don’t really spend as much time focusing inwardly when it comes to emotions. For them it can actually be draining to really look inside for too long and try to sift through their own feelings. This doesn’t mean ESFJs don’t possess their own desires and thoughts, it just means they don’t prioritize them. They can often feel a sense of guilt when it comes to their own feelings, and so they don’t want to burden anyone with these emotions. ESFJs can stress about the idea of expressing themselves and having people judge them for it. They also don’t want it to seem like they are whining about something, or trying to take all of the attention.

For the ESFJ focusing on their own feelings can certainly make them feel a sense of guilt or like they are doing something wrong. Most of the time it is just more natural to bury these emotions inside, instead of sharing them with others. They do have strong inner emotions, they just don’t always know how to process them or share them outwardly. For the ESFJ doing anything which might jeopardize the happiness of those around them can feel like a big mistake. They just find it more natural to tend to the emotions of others, rather than to tend to their own inner feelings and needs.

The Battle of What they Want

Finding the balance of what the ESFJ desires and what their loved ones feel, can be difficult. They are often so focused on taking care of others, and so they neglect their own needs. This is something which can feel noble and good for a while, but eventually it leaves the ESFJ feeling drained. It is important for them to take a step back and find some sort of balance in their lives, or else they are likely to have times when they are forced into their shadow. The ESFJ requires time for themselves and needs to learn to accept their own emotions rather than neglect them constantly. Without this time to decide what they truly want from life, they will expend all of their energy only focused on others which can turn into resentment.

While ESFJs do care for their loved ones and sincerely want to make them happy, it is necessary for them to also consider their own inner emotions and desires. The ESFJ will do best around people who want them to focus inward as well. They need people who care for the ESFJ and are willing to give back, instead of constantly taking from them. Finding this balance can be an ongoing battle for the ESFJ, but it is an important part of their growth. In order to become the best version of themselves they need to take time for themselves, as well as time for those they love.