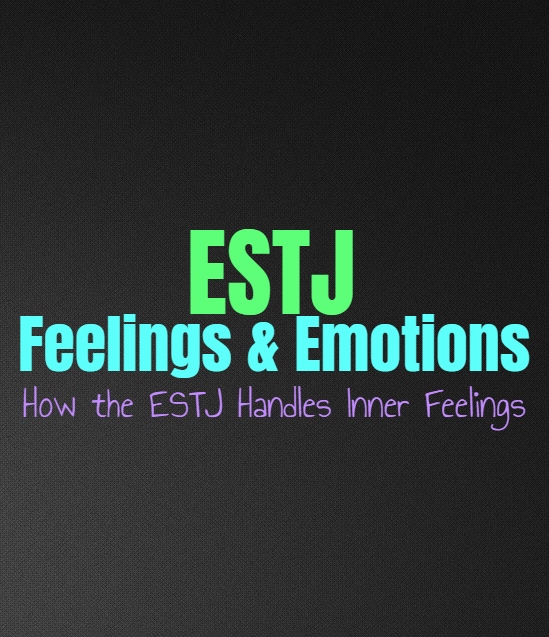 ESTJs are not viewed as the most emotional people, but this is because they keep most of their feelings inside. Just because ESTJs do not use their emotions to make many of their choices, this does not mean they do not experience them. They feel things very deeply, they are simply practical people who believe in getting things done. ESTJs are far more complex than most people give them credit for, which is why stereotypes can be so harmful when it comes to personalities.

ESTJs can sometimes appear like they don’t share the same emotions as others, since they value being practical. ESTJs do feel things just like everyone else, but for them these emotions aren’t something they want to prioritize. Instead the ESTJ cares about being able to get things done efficiently, which often means setting their emotions aside. Feelings can get in the way when it comes to being efficient and achieving certain goals, and so they don’t want to feel like they have foolishly been misled by emotions. For the ESTJ it seems a bit immature and unfocused when people allow their own feelings to get in the way of being able to get something done. They care about being someone who can achieve their goals and always get the job done with a high level of perfectionism. This doesn’t mean the ESTJs lacks a sense of caring towards emotions, they just don’t feel these things should get in the way.

For the ESTJ getting things done is important since it helps them to achieve their goals. They are practical people who often show that they care by more realistic expressions. They won’t be emotional when they are trying to show someone how they feel, instead they will be practical. The ESTJ will likely go out of their way to help someone they love, and ensure that this person is cared for. To the ESTJ making sure they have a roof over their head and are well fed, are important ways of showing you care for someone. Being able to provide for their real life needs is something which the ESTJ values immensely. For them this show how they truly feel towards another person, since they are willing to work hard in order to make sure they are comfortable and don’t have to worry about things. For others this might not seem very romantic or affectionate, but to the ESTJ it actually is. This can be hard for their loved ones sometimes, since they might not fully appreciate where the ESTJ is coming from. They take this as a serious responsibility and want to be someone who can actually care for the people they love and ensure their needs are met.

ESTJs might not be outwardly emotional or expressive people, but their family means everything to them. Most of their goals in life and all of their hard work, is done so that they can take care of their family and loved ones. For some people this might appear like a selfish goal, but deep down that is not the case. People see the ESTJ as sometimes aggressive and willing to always push hard in order to get things done. What they often don’t realize is that the ESTJ is always thinking of the people they love. When they set these goals they often have their family in mind, wanting to make these special people truly proud.

Striving to get things done and be someone who can impress others, is actually something which comes from a deeply personal place. What most people do not realize is this comes from wanting to please the ones they love. While ESTJs might not look for their approval in the most obvious of ways, they do really want this from the ones close to them. They don’t often care much about strangers and how these outsiders view them, but when it comes to their family the ESTJ cares very much. It just isn’t easy or natural for them to express these feelings to others. ESTJs don’t have a firm grasp on their own inner emotions and so being able to share things openly isn’t easy for them. They may want to express these feelings, but being able to is a constant struggle for the ESTJ. They might be afraid of showing their emotions and being judged, or of appearing weak in some ways. When it comes down to it the ESTJ cares immensely for their family and loved ones and would do anything to make sure they are properly cared for.

Their Feelings Are Very Personal

For the ESTJ their inner emotions are very personal, and sometimes difficult for them to fully understand. These inner emotions are often a big part of their morals and the beliefs they hold onto. For the ESTJ thought it can be challenging to fully process these feelings in ways which can be expressed to others. They might know how they feel about someone, but being able to put these emotions into words is an entirely different thing. They care about those around them and want to do anything to make sure they are happy, but sharing these feelings is just not easy for the ESTJ.

Their emotions and inner feelings are very personal and something which they hold inside. ESTJs don’t really process and sift through these feelings easily though, and some of the more intense emotions can be hard for them to pay close attention to. Sometimes it feels easier to just push these feelings inside, or bury the more negative ones. They don’t want anything to stand in the ways of getting things done and so ESTJs sometimes bury their feelings. For them it is best to use logic and be practical in their actions, and so certain emotions need to be pushed aside for them to be capable of this. This doesn’t mean the ESTJ doesn’t feel things deeply, they just don’t focus as much on these inner feelings.