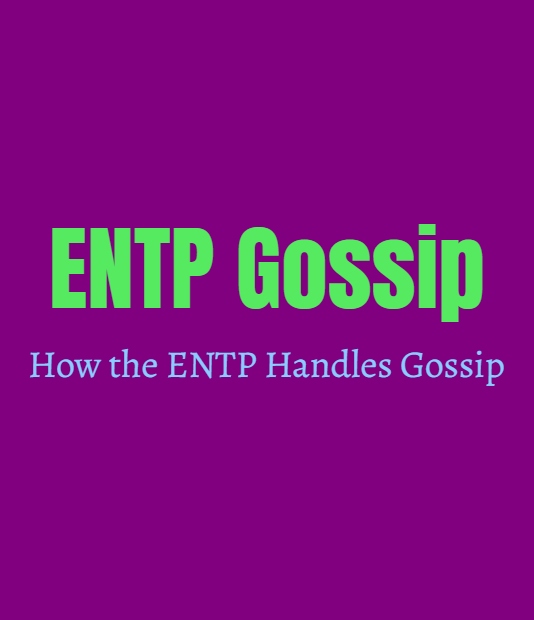 ENTPs are curious people who enjoy exploring different paths and options. For them sometimes it is about diving into something new just so that they can uncover more information. ENTPs will sometimes play devil’s advocate, which means putting themselves in the opposite mindset of what they actually believe deep down. This helps them get a better view at the different angles of a situation, instead of just seeing it from their own perspective. This also causes the ENTP to get themselves into occasionally sticky situations, simply because they are trying to push buttons and cross boundaries in order to gain more accurate information.

ENTPs are likely to bounce around and try to dive into new things in order to learn and grow from them. While ENTPs likely dislike the idea of gossip, that doesn’t mean they won’t participate for the sake of learning more about people. While some ENTPs might have rather intense feelings about avoiding gossip and people who enjoy it, that doesn’t mean it is the same for all of them. It is natural for ENTPs to be curious and want to explore different options and experiences in order to learn about themselves and others. Sometimes gossip can be a useful tool in learning about a person and what makes them who they are. It might be that the ENTP wants to understand why some people enjoy gossiping, other times they might be gathering information about the person they are discussing. For the ENTP it is often depends how malicious the discussion is, and if it is just intended to be slanderous they find it pointless.

When they are listening in on gossip to learn about someone it is often because they are interested in that person and who they are. ENTPs are very curious people and they often spend time researching a person they like, especially if they want to date that individual. Sometimes they gather information from other people, and while they won’t take it as fact they still want to absorb what they can and try to analyze it in order to decide if they feel it is true or not. ENTPs don’t mind talking about other people, sometimes this helps them to understand their behaviors better. It is important to remember that gossip doesn’t always mean talking poorly about someone, it simply means discussing them when they aren’t around to hear what is being said. For the ENTP their interest in gossip depends on so many factors, mostly if they can learn from it or not. ENTPs also try things out sometimes just out of curiosity and wanting to challenge people and see how they respond to this behavior. It might even be done sarcastically, but not everyone can tell when the ENTP is actually being sarcastic since it can be delivered in such a way that they struggle to notice.

There are times when it might be a good way to problem solve and figure out how to help a friend or loved one. Sometimes gathering information and bouncing ideas off of trusted friends can help the ENTP come up with solutions. They do enjoy being able to help others, especially the people closest to them. When someone is truly struggling with a problem, they might need to discuss it with someone else and use them as a sort of sounding board to come up with the best strategies. For the ENTP it isn’t about sharing negative information or trying to hurt them, and so it is certainly a bit different than the general idea of gossip. At times it can upset people though, especially if they don’t like the idea of their problems being discussed in this way. The intentions are to be helpful and to find logical ways of solving these issues, but not everyone wants to be helped by others even when they are struggling. ENTPs do know how to step back when someone makes it clear they don’t want to be helped, though, the boundaries have to be set clearly in front of them.

Drawing the line for ENTPs is never really their greatest strength, as they have a tendency to intentionally cross most lines. They don’t like feeling restricted to following certain rules or expectations and prefer to explore what is outside of these boundaries. They want to be able to experience things without feeling like they are being told what they can and cannot do. For the ENTP sometimes this means crossing lines even when they know they shouldn’t. They do get themselves into trouble at times, since their curiosity and desire to push the limits can upset people and get them into unexpected situations. ENTPs often know how to navigate this though and can figure out how to make the best of the situation. They don’t gossip with the intentions of hurting people, and so often when it becomes harmful this is where they draw the line. They don’t often care for gossip all that much, and so it isn’t that hard for them to walk away when it isn’t providing anything interesting or useful to them.