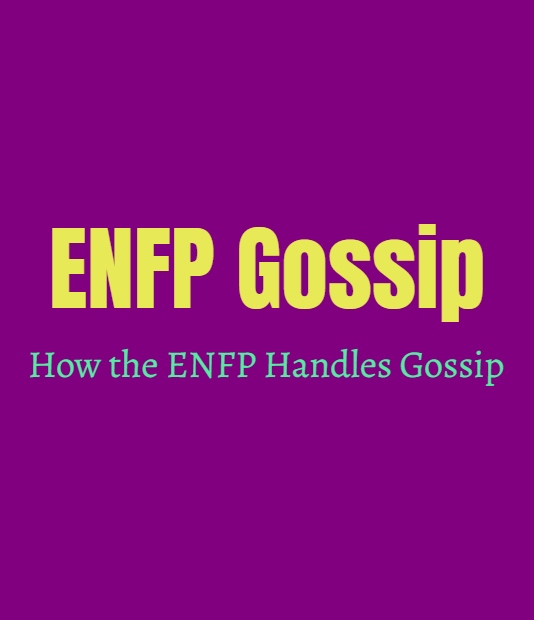 When it comes to gossip people might have a preconceived idea about outgoing personality types like ENFP, but they are often incorrect. While ENFPs might be social people who enjoy connecting with others, they are rarely prone to gossip. They are one of the personality types who is actually unlikely to be interested in these types of interactions, and prefers things which are deeper and actually hold some sort of inner meaning for them. ENFPs don’t find themselves drawn to shallow things, and so for them gossip just feels completely emotionless. It does however depend on their environment and the people they have in their lives at times.

ENFPs don’t really enjoy gossip and if they do somehow get roped into it, they feel drained afterwards. While ENFPs are extroverts they do find themselves becoming drained with certain types of social interaction. They enjoy alone time more than most other extroverted personality types, and need this in order to dive into their own rich inner thoughts and imagination for a while. ENFPs focus on the things which inspire them and make them feel passionate, and gossip just doesn’t fall into this category. They won’t naturally be rewarded or fulfilled by any kind of gossip, especially when this happens in large groups. ENFPs do have times when they need to vent to a close friend, but this isn’t gossiping or meant to stir up drama. Instead this is about expressing their inner feelings and being able to let this out instead of bottling it up for a long period of time.

When the ENFP gets sucked into gossip it is often because someone they care about is facilitating this. They have a hard time shutting someone down if they care for them and don’t want to hurt their feelings. They might show interested simply because of who it is coming from, rather than the fact that they actually want to hear about it. ENFPs care about making the people around them feel heard and they want to be able to listen to them vent or express something important to them. When it gossip starts to get out of hand they will start to get drained by it and might find themselves drowning it out. ENFPs have a knack for shutting things out and going into their own thoughts in order to distract themselves. If someone is gossiping too much but they don’t want to hurt their feelings, they are likely to just block this out and think about something more interesting to them. If the person is someone who gossips about everyone then the ENFP might start to distance themselves from that individual. A person who is willing to gossip about their friends isn’t really someone the ENFP feels they can trust, as they don’t want people who will be dishonest with them and talk behind their back as well. They care about their friendships but they want to be sure the people around them are actually worth having in their lives.

The closest the ENFP gets to gossiping is when they need to vent about someone. THis really isn’t intended as gossip and they don’t want this information to spread. The ENFP just needs to let out these emotions or else they feel more anxious about them. They need to be honest about how they are feeling and do best when they can express this to someone they trust. This really isn’t the same as people who gossip for the purpose of talking about other people behind their back. For the ENFP it isn’t really about the other person, instead it is about their own inner emotions and their need to filter them and understand them better. Once they can vent to someone and share what they are feeling or what this person has done to upset them, they can often move on and feel much better about the situation in the long run. ENFPs are certainly curious people who like learning more about others, but they want to hear this straight from the person and not from others around them.

ENFPs often know their own boundaries and the things which they don’t want to deal with on a constant basis. If someone has a tendency to gossip incessantly, then the ENFP will likely draw the line rather easily with them. They’ll make it fairly clear that they don’t want to hear about this drama, and would rather focus on something more entertaining and actually interesting. ENFPs want to discuss subjects which inspire them, things which actually are exciting and have depth, rather than surface subjects which leave them feeling emotionally and mentally exhausted. They need to have some sort of boundaries when it comes to people who gossip, or else they will find themselves feeling overwhelmed by these friends and might not want to be around them anymore.