Do You Feel That Reciprocity is Important, Based on Your Personality Type 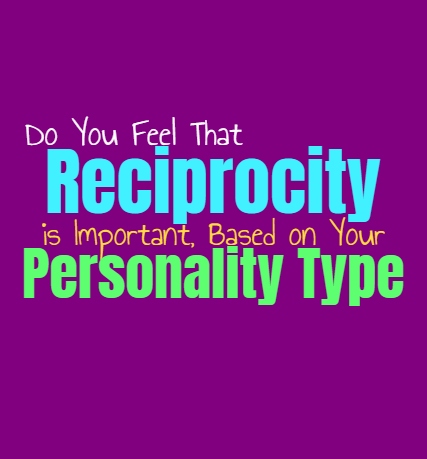 Do You Feel That Reciprocity is Important, Based on Your Personality Type

For some people the idea of reciprocity is truly important, as they don’t like when things are uneven. They feel like things should be mutually beneficial and when something becomes one-sided it is time to cut ties and move one. Here is how you feel about reciprocity, based on your personality type.

INFJs often feel like a sense of reciprocity is important, or someone will start to feel resentful. They can often see how people will become unfair and try to take much more than they give. For the INFJ this often feels unjust, especially when the person doing all of the giving is someone they care for. INFJs often give a lot themselves, and sometimes they can find that people try to take advantage of this kindness. When this happens they eventually grow tired of it and might feel the need to remove this person from their lives. For the INFJ the idea of reciprocating and ensuring that things are fair, is definitely important for a relationship to thrive.

While ENFJs often find themselves giving more than they get, they do believe that reciprocity is an important part of anything relationship. ENFJs don’t mind being givers, but they want to feel appreciation for their actions in the very least. They want the people around them to give back, but also show that they appreciate the kindness and compassion of the ENFJ. For them this is often excellent reciprocation, but without this they feel resentful and drained. They believe that things should be fair to some extent, and when it become one-sided the ENFJ starts to reevaluate these connections.

INFPs don’t necessarily need things to be perfectly even and constantly tallied, but they do believe in reciprocity. They want to relationship with plenty of give and take, even if it isn’t in obvious ways for everyone else. As long as the INFP is giving their all to someone and they feel this in return, they are often happy with the way things are. They don’t need this reciprocation to be calculated and measured a certain way, they just want to know that there is love going in both directions and that the connection is just and fair.

ENFPs do care about a sense of reciprocity but they don’t really like keeping track or measuring this. They just want to feel appreciated for their actions, and want to be around people who aren’t just takers. Sometimes ENFPs don’t really recognize how much the give and take is, maybe feeling as if they are always doing a bit more than they are receiving. ENFPs don’t want to focus on these details though, they just want to be sure that their actions are appreciated and want to be sure the person they are with cares enough to give to them.

INTJs certainly believe in things being mutually beneficial, since they don’t like when things are uneven or unfair. They are focused on getting things done and being efficient, but they also believe that in order to do this things need to be reciprocated. INTJs don’t mind helping others, and often when they do this they feel they are being reciprocated by the fact that they have spread knowledge. INTJs are ultimately independent people who focus on getting things done their own way, but when they work with others they do want things to be reciprocated the right way.

ENTJs do believe in a sense of reciprocity, at least to some extent. If people are not willing to demand respect and that things are done fairly, then the ENTJ doesn’t take this as their fault. They set their own boundaries and believe that others should do this as well. In order for things to be properly reciprocated then they need to set these boundaries and ensure that the process goes smoothly and fairly. ENTJs aren’t afraid of demanding their needs, and they feel that others should do this as well.

INTPs do often feel like reciprocity is important, but it can be difficult for them to really gauge this. Since they don’t base things on emotions the INTP often tries to find more logical means of measuring whether things are being fairly reciprocated. They might not always see eye-to-eye with their loved ones because of this and can sometimes feel like things are uneven between them. INTPs want things to be fair but they also don’t want to create a sense of tension between themselves and the ones they love.

ENTPs do believe that reciprocating is important, but at the same time they aren’t obsessed with measuring this. They want to be supportive and helpful towards the ones they love, and want to feel appreciated for the things they do as well. ENTPs don’t believe in keeping a tally of things done and things given between loved ones, as long as both parties are happy then that is really all that matters to them. They do believe in reciprocity, but they don’t believe it needs to be measured the way that others expect.

ISTJs believe that things should be equal in their lives and in their relationships. They don’t think it is right when things end up uneven or unjust in some ways. For the ISTJ it is important that things are reciprocated and that there is a way of making things fair. They give a lot to their loved ones and just expect that these people will pull their own weight in some ways. It doesn’t have to be in the same ways the ISTJs provides, but it does have to make things fair and there does have to be a give and take.

ESTJs believe in a give and take in any relationship, whether it be romantic, familial or a work relationship. They believe that reciprocation is vital and that things need to work both ways. ESTJs will give it their all and always do their best to be completely efficient, but they do expect to receive this in return. They become bothered when it seems like someone is not giving back or pulling their own weight, and this can cause the ESTJ to become clearly frustrated with this person.

ISFJs are often very giving people who will do a lot for the ones they love and care for. They do their best to make people happy and want to create a sense of comfort and harmony in their environment. While ISFJs are willing to give more than they receive, this doesn’t mean they don’t believe in some sort of reciprocation. They want the people around them to show appreciation and often believe it is important that things be fair even if they can’t be 100% perfectly even.

ESFJs really don’t like when things are unfair, but they are naturally inclined to give more than they take. ESFJs are okay with things not being perfectly even but some sort of reciprocation is important to them. Often the ESFJ wants to feel loved and appreciated for the things they do, and for them feeling a great sense of adoration is often enough. For the ESFJ some sort of reciprocation is definitely important so that they don’t start to feel resentful towards others.

ISTPs don’t need to measure how well things are reciprocated, they just need to feel like things are fair. ISTPs want to feel free to do things their own way and don’t like this idea of having to measure how equal everything is. They give when they want to and accept what they can from their loved ones. For the ISTP it is better to do as they please and not constantly expect things in return from those around them.

ISFPs don’t really care about reciprocity, at least they don’t like the idea of measuring everything out all of the time. They do want to feel like they are giving to those around them and receiving as well, but it doesn’t have to be tallied. For the ISFP it is more about how each person feels and if they are satisfied with the relationship and how things are going.

ESFPs really don’t care much about measuring or tallying whether things are being reciprocated, as long as they feel like they happy in the way things are working. ESFPs want to give to their loved ones but they want to feel loved and appreciated in return. For them it is about knowing that both people involved are happy and feel like they are being loved properly.