INFJ Type-A: How the INFJ Executes a More Assertive Personality 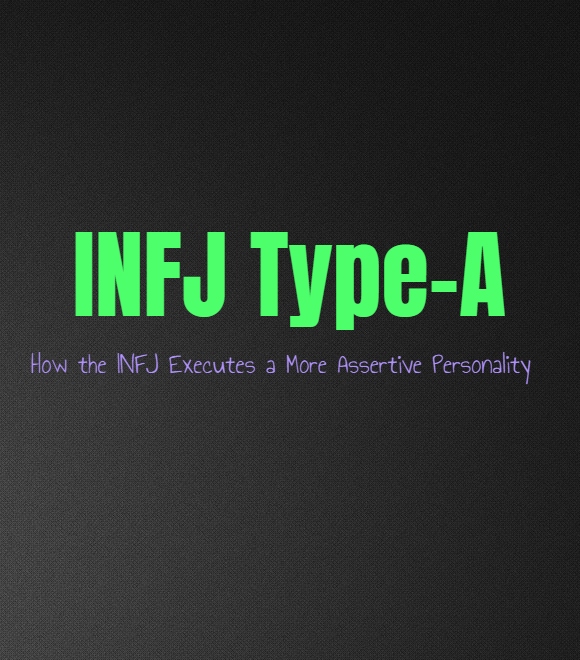 INFJ Type-A: How the INFJ Executes a More Assertive Personality

Most INFJs seem to be inclined to the T type personalities, since they can sometimes struggle with making concrete choices. This comes from being a bit more sensitive, and struggling to really push past certain emotional barriers in order to get things done. INFJs are focused and driven people but they care about ensuring that they don’t make mistakes and are often more perfectionist than some other types. They struve to get things done but can often want to readjust their process and perfect it.

INFJs are usually seen as worriers and more stress prone, which is why they often test as INFJ-T personalities. They are usually more drawn to these behaviors because they care so much about getting things right. Most INFJs do fit more into this type, and so the INFJ-A type is often much less common. While it is not common, this doesn’t mean it is impossible since some INFJs do test this way. When the INFJ fits into the type A personality, they are much more laid back about their choices. They don’t constantly worry about things going wrong, and have found more peace within themselves. They don’t allow themselves to become as affected by the outside world and changes around them, and may be even more focused on their own inner minds and inner worlds.

The INFP-A type stops worrying about the things around them, often because they are more focused inwardly. They don’t allow these outside stimulus to cause them to stress over things they cannot change, instead they focus on their own inner thoughts and feelings. They are much more laid back about things, not needing to constantly seek out a sense of personal control over what occurs around them.

They Don’t Need to Be Perfect

Most of the time INFJs are viewed as perfectionists who want everything to go according to plan. They can have trouble letting go of control and take a lot of pressure on themselves to get things done a certain way. Because of this INFJs are not usually seen fitting into the type A personality, since they aren’t that laid back. They don’t require that everything around them is perfect and are much more capable of letting go when things don’t go as they plan. This type of INFJ has likely spent time developed their weaker functions, wanting to be a more balanced person. They search for ways to look inward and be more accepting of themselves and their own flaws.

This INFJ isn’t afraid of making mistakes, and realize that they are going to make them regardless. They allow themselves to learn from these things, but don’t need to constant change every mistake and find ways to fix every problem. They will accept the mistakes and the imperfectionists around them, not needing to constantly perfect every tiny detail. This is much less common for INFJs, since being a perfectionist is in their nature. The INFJ-A type is much more complex, and has learned to focus on these other aspects of their personality. They don’t focus on their perfectionist side and instead focus on their sense of inner peace, working to understand how to be a more relaxed and calm individual.

They Do Not Lack Confidence

INFJs with the type A personality are not lacking in self-confidence and have often developed a much strong sense of self. They aren’t afraid of taking chances and of living their lives. They don’t allow the struggles they experience to break them down and search inward for a sense of confidence. INFJs often possess a sense of confidence in their abilities and knowledge, but they can go back and forth with self-doubt and self-confidence throughout their lives. The INFP-A type is often more inclined towards confidence, not wanting to allow any self-doubt to creep in and cause them problems in their choices. They are more sure of themselves and comfortable in their own convictions.

This type of INFJ is even more of a contradiction, going against their usual behaviors. Instead of doubting themselves and constantly second guessing their choices, they stand behind their convictions. They are much more sure of their actions and don’t want to go against what they do by allowing doubt to seep in. Instead this INFJ tries to be more relaxed about their choices, but are not afraid of asserting themselves and showing that they are comfortable in their own skin and aware of their own personal knowledge.