INTP Type-A: How the INTP Can Fit Into the Type A Personality 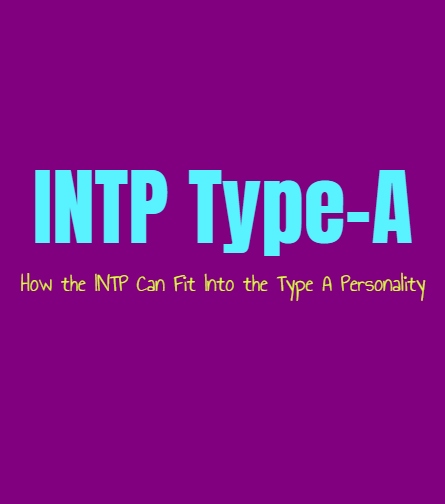 INTP Type-A: How the INTP Can Fit Into the Type A Personality

While being a type A for the INTP can seem like a contradiction in some ways, this isn’t entirely true.The A types are often more seen as outgoing or social people, but in some cases this can still tie into the introverts of the personality world. They can still be rather social and charming, they just need plenty of time to energize themselves after this interaction is over. For the INTP-A personality, there are a few differences which make them stand out from their more turbulent INTP types.

This INTP is much more self-confident and ready to charge into things without hesitation. They are very sure of themselves and their knowledge and don’t allow the doubts of others to hold them back. They are not afraid of expressing their knowledge and are often very aware of their abilities. Instead of being afraid that they cannot do things, this INTP is much more sure of themselves. They spend so much time learning and researching and are confident in this. They don’t want to be restrained by doubts or fears, and are comfortable in what they know and have experienced.

This INTP doesn’t seem anxious or nervous around others, instead they are calm and collected. They don’t constantly seek to prove themselves outwardly and have already sought approval within themselves. They might appear a bit direct in the way they express things, but this is because they know when they are right. This INTP doesn’t believe in refraining when they know the answer to something, and would rather do their best to spread this knowledge to those who might be a bit ignorant. They also might attempt to be helpful with what they know, which can occasionally be annoying to those around them. This is because the INTP-A personality is a bit more likely to give their advice, even when it has not been requested. This can be frustrating for people at times, but the intentions of the INTP are often just to help them improve their situation. Their confidence can make it come across the wrong way, but they often just want to help out where they can.

They Stop Second Guessing Themselves

The INTP-A personality is often less likely to second guess themselves and their choices. Instead of spending hours over-analyzing something and becoming fearful of the results, they are more comfortable making decisions. After they have spent a normal amount of time doing research and analyzing the information, they will be capable of proceeding. They are more firm in their choices and don’t believe in doubting what they already know to be the truth. Some INTPs can find themselves afraid to take the leap once they have found the information, but the type A INTP does not feel this way. Instead they push themselves forward with the knowledge and assertiveness to get things done. They are confident in themselves and their abilities and this helps them to avoid this inner doubt. Instead of constantly trying to find another possible bad outcome, they are more comfortable proceeding with the choices they make.

They realize that things might not go perfectly along the way but they are more comfortable adapting to the situation. This type of INTP knows themselves better and become more confident in what they can do. Instead of never feeling good enough and wanting to perfect even the smallest detail, they are ready to take chances and dive into things without constantly wanting to improve. While they are capable of improvement and growth, they don’t want to do this to the extent that it becomes obsession and keeps them blocked from ever truly succeeding or getting things done in life. They are often aware that they need to take a few risks and actually experience life in order to accomplish the goals they are capable of.

They Aren’t As Hard on Themselves

The turbulent INTP is likely to be very hard on themselves, while the INTP-A is not. They don’t constantly feel the need to judge their own mistakes and stress about what the outside world might think of them. Instead they take these mistakes as a chance to move forward into something better. They don’t feel this strong desire to constantly fix their errors or punish themselves for them. Instead of constantly needing to find ways to make every action perfect, this INTP realizes that sometimes the mistakes can actually be rewarding. They are much less judgemental of themselves and others, which can be something rare in many INTPs.

These qualities are often why the INTP is more drawn to the INTP-T type, but that doesn’t make it impossible. This version of the INTP just much more self-assured, and more comfortable making mistakes and letting go of things. They have learned to live without perfection, and simply use the tools they have been given in order to live their best lives.

They Are Less Afraid of Emotions

Most INTPs struggle with emotions and accepting them, but the INTP-A is often less afraid of these inner feelings. They might not be comfortable diving into them, but they don’t stress or doubt what they are feeling. Instead of constantly feeling a sense of anxiety over these unknown feelings, they are more accepting of them. They realize that emotions are part of life, even if they don’t have to always understand them. They can be less anxious about these inner feelings and will allow themselves to make a few mistakes because of them. They still might not be the most emotionally confident people, but they are much less stressed about these things.

Since this type of INTP is less prone to stress responses, they can also be more comfortable with emotions. They try to allow these feelings to happen without needing to run away from them or completely avoid them. Their sense of confidence and willingness to let go of things, helps this INTP to conquer their fears and often move forward in life. They are much more capable of achieving their goals, using their inner knowledge as a means of accomplishing the things they want.