INFP Type-A: How the INFP Behaves as the Type A 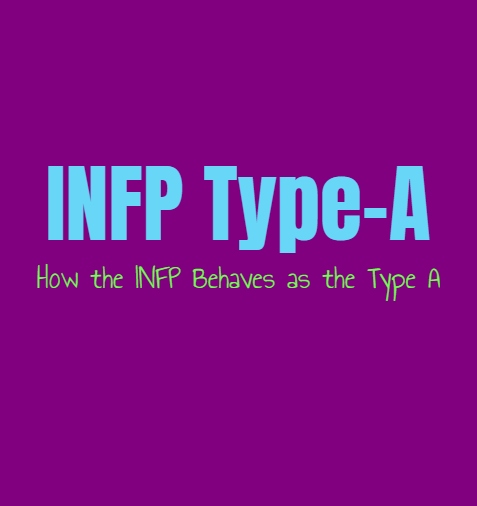 INFP Type-A: How the INFP Behaves as the Type A

INFPs as the type A personality are more uncommon than type T. They aren’t usually the more assertive types, and can be a bit more passive with their behaviors. INFPs are also less organized and direct with things, and don’t really have as much follow through, especially when they are younger. This makes them less inclined towards being a type A INFP, but that doesn’t mean it doesn’t occur. While the INFP-A personality might be more direct with their choices, they are also more comfortable and sure of them, not constantly seeking to start over and improve.

They Are Good at Finishing Things

The INFP type A is very good at finishing things, and don’t feel nervous about following through. They are more laid back and unafraid of failing, which gives them the courage to finish things. The INFP who doesn’t possess these traits can be less comfortable continuing with tasks, because they are afraid that they are never perfect. These perfectionists qualities make it challenging for them to complete tasks and goals, while the INFP-A personality doesn’t possess this struggle the same way. They move forward and finish these projects without this constant desire to improve or change things. They are assertive with these choices and unafraid of failing or being judged for what they have done.

This is something which takes some INFPs times to develop, and might not just be naturally part of them when they are younger. This is because having this sense of confidence in themselves as they are, is something which they might need to work on. They are not going to feel anxious about their choices and constantly second guess them, because they are prepared to follow through. They feel more laid back about these things, not wanting to obsess over the results.

They Are Confident in Themselves

INFP type A personalities are just more confident in themselves, feeling a sense of direction. They know what they want more firmly, and don’t need to constant change their path. They don’t obsess over the smaller details and allow these things to cause them unnecessary stress and worry. This isn’t something most INFPs possess, since they can often worry about the smaller things even if it does not show outwardly. The INFP-A personality doesn’t allow perfectionism to hold them back from following through with what they believe in. They will continue moving forward and want to believe in themselves even amidst the struggles.

They will make these choices in a much more assertive manner, without being worried about the results. They find themselves lacking this fear in the way the less mature or more turbulent INFP would. Their natural means of doing things is more laid back, and more confident in their own abilities and path.

They Stand Up For Themselves

The INFP type A personality is comfortable standing up for themselves, and doesn’t need to constantly apologize for it. They will speak their mind when they want to, instead of feeling like they need to constantly hold back. They can actually be rather outgoing people, but they often focus this more on their close connections. They are comfortable connecting with these people openly, and can speak up without feeling anxious about it. They aren’t constantly second guessing their feelings and thoughts, instead they are comfortable being able to speak their mind when it feels right or simply when they want to. The INFP type A is often capable of being outgoing and charming, especially around people they like and enjoy being around. They might not want to be social with everyone they meet, but they are comfortable being this way if they chose to. They might still be introverts who don’t always want to be around others, but that doesn’t mean they aren’t comfortable being the center of attention.

While all INFPs crave deep conversations, the INFP type A is less comfortable chatting about their daily stresses or trivial things. They don’t want to focus on drama or gossip, and rather let go of those stresses. They don’t feel the need to whine or gripe about something which happened at work that day, instead they want to get into deep and meaningful discussions which leave them feeling more fulfilled and energized. They aren’t afraid to dive right into these conversations, not wanting to waste time and energy on small talk or conversations which seems pointless. The INFP type A wants to get to the heart of things, without feeling ashamed of it.

While they are still the typical INFP, they possess certain qualities which most people don’t really connect to the INFP. They are more assertive and in control of their actions, without feeling constantly afraid of moving forward. They don’t doubt themselves or their choices, and would much rather follow through than second guess themselves. This INFP doesn’t allow fears to hold them back, they have a much more laid back way of doing things and of living their lives.