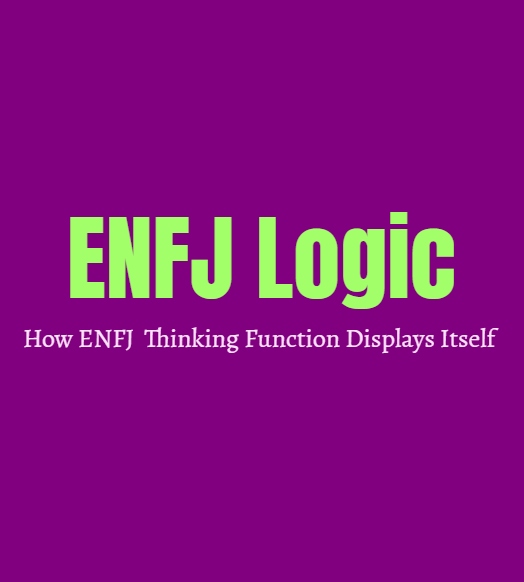 ENFJs are definitely more focused on the emotions of others than they are their thinking function, but that doesn’t mean it doesn’t play an important role in the way they process things. For the ENFJ it isn’t necessarily as important to focus on logic, but that doesn’t mean they aren’t capable of it. Their introverted thinking function presents itself in different ways because of where it is placed on their functions stack. It is definitely something which is important in understanding the ENFJ and how they process information and how they respond to the people around them.

For the ENFJ their dominant function is their extraverted feeling, and so this is what they use primarily to process the world around them and respond to people. The ENFJ makes choices based on this Fe, and this is what drives them to focus so much on tending to the needs of those around them. They navigate the world by reading the emotions of others and using this as a means of making the most of their choices in life. It isn’t that the ENFJ relies on what people believe in order to dictate their own beliefs, instead it is about making sure the ENFJ is sensitive to the emotions and needs of other people. They also use this to navigate situations by understanding people and being able to coerce them or communicate with them. For the ENFJ their Ti is actually their inferior function and so it is the one which is naturally weakest for them. It isn’t easy for the ENFJ to intentionally draw from this function, but because of that it is often something they are drawn to. Our inferior functions are almost always a point of interest  and fascination for us, especially for the ENFJ and being around dominant Ti users. Naturally the ENFJ uses Ti to problem solve when they can, and to figure out ways of helping the people around them. It is definitely still connected to their desire to care for the people in their lives, and also to live up to the expectations the ENFJ places on themselves.

The ENFJ is more likely to be seen using their Ti too strongly when they have gone into their shadow. This is when the ENFJ has applied too much pressure on their dominant function, and this creates stress which pushes them towards their inferior function instead. When this happens the ENFJ is much more critical of themselves and the people around them. They will constantly judge their actions wanting to be precise with even the smallest of details. This is only when the ENFJ is under extreme stress, and really isn’t something which comes naturally for them. This is also not something that should occur for long periods of time, as the ENFJ needs to find a way back to their dominant function. As the ENFJ does get older they certainly are capable of growing their inferior function and becoming more independent in their choices. This will help the ENFJ to depend on their own judgement and start to feel less obligated to the happiness of those around them. While caring for others will always be part of who they are, they start to be capable of setting these healthy boundaries.

The ENFJ introverted thinking function is often displayed in the way they actually enjoy spending time researching. ENFJs often enjoy reading and learning about new subjects, things which are scientific and factual. This part of them is certainly attributed to their introverted thinking function and is one of the more outward ways this is displayed. ENFJs might be focused on caring for others and they are certainly imaginative people who enjoy fantasy ideas and thoughts, this doesn’t mean they cannot also be logical minded. For them it is often deeply rewarding to dive into different complex subjects, and so this is part of where their introverted thinking will shine through in unexpected ways. ENFJs are often good at many different subjects in school, where most people only excel in certain areas. They enjoy a wide variety of information and want to be open to learning about so many different things and subjects.

For the ENFJ their greatest weakness with their introverted thinking is simply the fact that it is their inferior function. It can become draining and even stressful for the ENFJ to try to focus too hard on using this function. They are naturally more focused on their extraverted feeling and their introverted intuition. ENFJs are good at predicting future outcomes and excel at navigating people and understanding them in ways that most cannot imagine. The ENFJ is in tune with the emotions of others, which makes their introverted thinking much less natural for them. Trying too hard to dive into this part of themselves without finding a balance, can really cause the ENFJ extreme stress. They do often have a strong interest in a sense of inner control and in understanding this part of themselves, but it is best for them to take time rather than trying to force themselves into this.