Biology of the Brain 101: Neurons, Synapses, and Dopamine

Our first article explored some of the basic connections in the brain and the tools we currently have for visualizing parts of this complicated and awe-inspiring organ. Next we will look at two more fundamental concepts of neuroscience that will help us talk about dopamine’s role in personality research: the brain cell (neuron) and synapse. 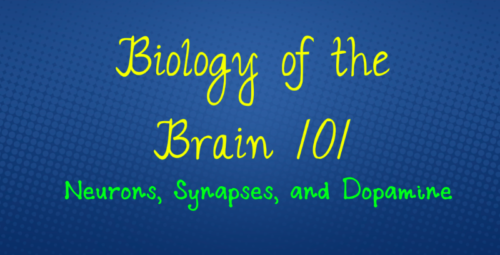 Neurons have three parts: the central body of the cell (soma), axon and dendrites. The soma holds all the machinery of the cell: cytoskeleton components (e.g. microtubules) support the neuron’s basic structure, while organelles (e.g. nucleus, mitochondria, Golgi apparatus, endoplasmic reticulum, ribosomes) carry out cell metabolism (DNA, RNA and protein synthesis). Let’s not get carried away by molecular biology before noting that the soma branches out into the other two parts of the neuron: the axon and dendrites.

Think of axons like long fibers, essentially the internet cables of the body. Axons carry signals to other cells. Depending where the neuron lives (brain or spinal cord), its axon will connect to nearby nerve cells or extend out into the body to control muscle tissue and other organ functions.

Dendrites are shorter relative to axons. These fibers are named after an ancient word for tree, because they look like branches. Dendrites receive signals from axons. Depending on the type of neuron, there will be one or more dendritic tree per cell.

There are one hundred billion neurons in the human brain. How do they connect and coordinate with one another? This HarvardX Neuroscience video explains the concept of a neuronal synapse, where communication occurs between cells. The word synapse came from a Greek word meaning “to clasp together.” This communication either happens through electrical signals or through chemical substances called neurotransmitters. Scientists have discovered at least one hundred unique neurotransmitters, including different amino acids, larger proteins (peptides) and other lipid or gas molecules. Acetylcholine, norepinephrine, serotonin, oxytocin, dopamine and nitric oxide are just a few examples. If our neurons are like cables and routers, neurotransmitters are the wifi.

Continuing this internet-based analogy, each synapse is like a Starbucks: empty or busy depending on the time of day. When lines are long, the baristas are busy taking and receiving orders. Customers, stimulated by caffeine, are typing away at their laptops, accessing new websites, or talking and gesturing to each other. When business slows down, the baristas clean the tables and prepare for the next influx. One or two customers might be patiently working.

Like people passing cups or devices transmitting wireless signals, neurons are communicating both chemically and electrically. When an axon releases neurotransmitters into the synaptic space, the molecules can bind to receptors on the receiving cell’s membrane. If the receptors receive enough signals, the neuron will become either excited or inhibited, depending on the type of neurotransmitter. Excitatory neurotransmitters include glutamate and dopamine: these lead to active behaviors like seeking food and social connection. Examples of inhibitory neurotransmitters are GABA and serotonin, which effectively put the brakes on the brain, mood and the rest of the body. To better visualize what happens on a biological level in a synapse, play the Nerve Signaling Game on the Nobel website. Isn’t it amazing that these tiny spaces are steering our behavior?

One neurotransmitter in particular is the subject of study surrounding personality and human development. Current evidence suggests that dopamine plays a significant role in brain differences in extraversion. Recall that dopamine is excitatory, associated with motivation, novelty and reward-seeking behavior. Eager to explore a new restaurant? Anticipating the number of likes and follows on Instagram after a new post? The rush we feel means we are expecting reward for an external situation or context. Our brains then help us enact the behaviors to achieve the reward. Researchers might call these feelings incentive motivation. Drug reward experiments are common ways to show correlation between neurotransmitter action in specific brain regions and resulting human or animal behavior.

A 2013 study at Cornell University showed that participants who received methylphenidate, a psychostimulant drug that mimics dopamine action, responded in a more extraverted way to specific tasks than participants who did not receive the drug. Researchers showed men five video clips: a panning view of the front of the university library, a panning view of the front of a lab, a portrait of a woman, neutral rainforest scenes, and a football player scoring a touchdown. The videos were chosen for their different incentive values, or how motivated they were likely to make participants feel (with rainforest as low incentive, football high incentive). Differences in the men’s responses were measured over the course of a week using a positive affect scale (asking participants to rank on a scale of one to ten how active, elated, enthusiastic, excited, peppy, and strong they felt after each video) and motor velocity tests (number of dominant finger taps in five seconds). They also performed a working memory task. The men’s results were statistically analyzed across six groups: placebo, unpaired, paired or unpaired low extraverts, and paired or unpaired high extraverts, with the first two groups serving as experimental controls (the placebo group received no drug, while the unpaired group performed the same tasks in a different lab environment). It is interesting to note that only male brains were studied, because the female dopamine pathway varies based on the timing of the menstrual cycle. The curious reader can view the data and results here. These results build on other data linking extraverted behavior to the the dopamine pathway between two brain regions, the nucleus accumbens (NAc) and ventral tegmental area (VTA). The Cornell study suggests that how our brains associate contexts with rewards is related to how extraverted we are.

By discussing neurons and synapses alongside dopamine, we are beginning to build a better understanding of how neurotransmitters are working in parts of the brain and affecting personality. Neuroscience is a complex field, but studying it may be worth the effort for those who wish to uncover the secrets of the brain. Consider this statement about dopamine (DA) made by the Cornell scientists: “DA release in the NAc plays a critical role in the formation of complex contextual ensembles that predict the occurrence of reward.” Their choice of language suggests a deep appreciation for neuronal interactions, as we struggle to fully characterize the brain’s explosion of information processing. Here’s something else for introverts to think about: dopamine may also be related to how we enjoy personal space. Obviously, there is more work going on in laboratories and universities that is beyond the scope of this brief article. A 2015 review calls for more causal evidence for the dopamine hypothesis, citing promising EEG and fMRI evidence. There is always more to discover!

Richard A. Depue and Yu Fu, On the nature of extraversion: variation in conditioned contextual activation of dopamine-facilitated affective, cognitive, and motor processes, Frontiers in Human Neuroscience, 13 June 2013: http://journal.frontiersin.org/article/10.3389/fnhum.2013.00288/full

Rachel Suppok, The Science of Extraversion and Introversion, Truity: https://www.truity.com/blog/science-extraversion-and-introversion