The Most Uncomfortable Situations For Each Myers-Briggs Type

The Most Uncomfortable Situations For Each Myers-Briggs Type 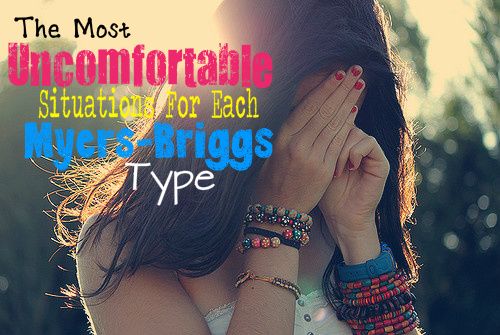 Even the most comfortable and confident person can feel uncomfortable sometimes. Certain situations can affect people in ways that make them feel very uneasy and awkward. Here are some situations that we believe will make each personality type feel most uncomfortable.

Being around people who they have opened up to and feel close to, along with people they do not trust. That feeling of being with that one person that they can act like their true selves around, while simultaneously being surrounded by others, can be a very awkward experience. It can make their trusted friend confused because the INFJ no longer acts completely open and comfortable, making them wonder why. Their unique brand of guarded, can throw people off sometimes and this makes the INFJ feel uncomfortable.  Sometimes being around too many people in general can make the INFJ feel drained. They have a strong sense of others emotions and being around large amounts of people’s feelings can be very draining all at once.

Any situation where the ENFJ is embarrassed in a public setting, makes them feel extremely awkward or shy. They care about how others perceive them and are very conscious of what others feel. Because of this the ENFJ can experience moments of intense discomfort, and social anxiety. Caring too much and simultaneously understanding too much, can make them feel awkward in certain situations. As much as they enjoy being around other people, sometimes being tossed into the spotlight can make them feel pressured.

Feeling like someone doesn’t like them, might make the INFP feel awkward. They often understand others very easily, and will feel uncomfortable if someone is acting strangely. Knowing that someone harbors bad feelings towards the INFP, will make them no longer want to be around this person. INFPs aren’t fans of faking it or being dishonest, and will not want to have to pretend around others. They often feel uncomfortable in large groups as well, since group settings often lack deeper and real connections. When there are too many people around the INFP may feel like they cannot consciously be aware of how everyone is feeling or perceiving them or others.

Awkward silences often make the ENFP feel very uncomfortable. Sometimes dead silence can speak volumes, and they might worry that this means something is wrong. If they aren’t able to fill the silence, the other people might believe that the ENFP dislikes them. Feeling like someone may misconstrue their actions makes the ENFP very uncomfortable. They may also be concerned that the other people dislike them for some reason if they are refusing to talk openly to the ENFP. Sometimes it is challenging to read other people and it can make the ENFP uneasy. They want to be able to understand and connect with people, it is very important to them. They also want to be able to keep up a witty banter with others, and feeling unable to is frustrating.

Having to hold up with social norms in public, can make the INTJ feel uncomfortable. They often become drained by being thrown into a situation where they have to maintain conversations with people that don’t surround the serious topics that matter to them. Simple social rituals aren’t the INTJs favorite thing and can make them feel uncomfortable. Being forced into a situation where it is frowned upon if they cannot follow the social guidelines is something that the INTJ definitely is not proficient in and can make them want to step away from the situations desperately.

Being forced to withstand other people’s emotional breakdowns, is something that will make an ENTJ feel extremely uncomfortable. When they have to deal with others feelings the ENTJ often does not know how to respond. They often do not read people well when they are upset, and don’t know how to console them which makes them feel awkward. It is not that they do not care about others, they just don’t have a strong understanding of feelings and are often unsure of how to deal with them.

Being unable to logically explain something very often makes the INTP feel uncomfortable. They want to be able to apply a logical explanation to almost anything, which makes being unable to do so very difficult. Having to express their own emotions is often tied to this, since emotions cannot be applied logically (even though they try desperately to do so). They can feel uneasy when they are experiencing powerful emotions, and often do not know how to express them properly when others want them to. Being forced to openly discuss how they are feeling is a sure way to make an INTP feel uncomfortable. Receiving compliments can also make an INTP feel shy or awkward.

When someone else is coming on way too strong (especially romantically) the ENTP will often feel uncomfortable. They definitely aren’t displeased if someone initiates, but really dislike if the person is pushing too hard. They dislike feeling overwhelmed by someone trying to force a situation upon them. They don’t like to be told what to do, and need some space to figure out what they actually want out of the situation before being forced to make a decision. They also feel uncomfortable with excessive displays of public affection. They dislike the awkward feeling of expressing emotions in front of others, making this one of the only situations where you might just witness a blushing ENTP.

They dislike being thrown into brand new situations and this often makes them feel very uncomfortable. They want to be capable of handling anything that comes at them, and want to be able to perform their duties successfully. If the ISTJ is tossed into a situation where they have to quickly break their scheduled plans or learn something new, they may feel uncomfortable. They enjoy having time to become proficient in something, and while the ISTJ are often very skilled learners, they are not comfortable with things that are completely new to them.

ESTJs can often become uncomfortable when other people are expressing too much obvious emotion. They do care about people but struggle with responding to them when they are sad. Their instincts are to force a logical explanation out of the upset person, in hopes of fixing the problem immediately. If someone outwardly explains what is bothering them, the ESTJ feels like they can apply practical means to making the situations better. If someone is just expressing hurt or sadness, the ESTJ often does not know how to respond and can become impatient.

When people refuse to stop fighting, the ISFJ often feel extremely uncomfortable. They truly despise discord and want to do what they can to calm the situation. When people fight the ISFJ becomes extremely unhappy and often feels responsible to make things better. They want the people they care about to get along and strive to create harmony in their environment. When discord arises the ISFJ will attempt any means possible to making things better and more at ease.

ESFJs often feel uncomfortable when they are forced to perform in front of people on the spot. They enjoy making others happy, but if someone they care about or like demands that they do something, it makes them feel uneasy. They dislike letting others down and put a lot of pressure on themselves to make others happy. If they are tossed into a situation where they feel like they might disappoint someone, it makes them unbelievably uncomfortable and nervous. Being in a situation where they have disappointed their loved ones in any way, will make the ESFJ extremely uneasy.

Intensely uptight people trying to make conversation with them, can make the ISTP uncomfortable. When people aggressively come onto them it makes for a very awkward situation. They also feel very awkward if they are forced to endure being around dishonest people. They dislike being alone with someone that they do not trust. Also being forced to express emotion, can make the ISTP feel extremely uneasy.

ESTPs feel uncomfortable with too much openly expressed emotions. They don’t mind if someone else is upset and are decent at consoling them, but become quickly drained when this continues for too long. They feel uneasy when situations are forced upon them, and want to be able to make their own decisions. ESTPs also feel uncomfortable in situations where they are forced to perform a task that they struggle with. They want to be seen as capable and rarely struggle with accomplishing tasks, so being unable to makes them frustrated.

Feeling like they are surrounded by people who do not understand them, makes the ISFP feel uncomfortable. They are often very private people and do not want to be forced to share themselves with people who do not appreciate who they are. If they are made to open up to people they do not trust, the ISFP will feel extremely uneasy. ISFPs enjoy affection, but dislike being tossed into a situation where they are forced to be the center of attention.

When other people expression intense amounts of anger, ESFPs often feel uncomfortable. They want to keep their surroundings upbeat and fun, and people who prevent this make them unhappy. If they are forced to constantly endure someone’s angry or controlling behavior, the ESFP will feel extremely uncomfortable in that environment.

The Biggest Inspiration For Each Personality Type

Something That Each Personality Type Struggles With